HomeNewsPoliticsObama Sending at Least 400 More U.S. Troops to Iraq to Fight War Without a Strategy 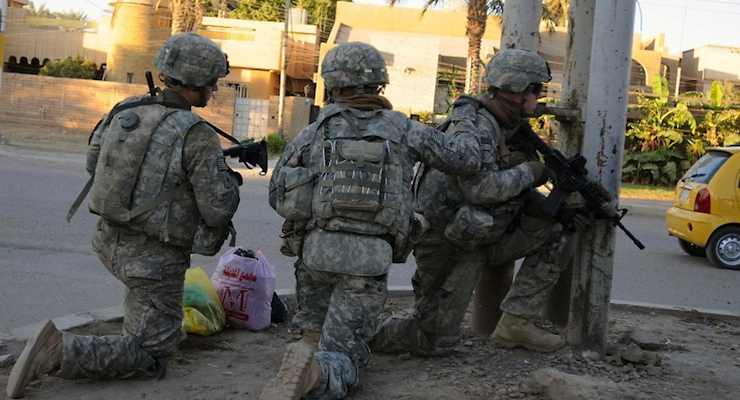 U.S. troops take a knee at a street corner before continuing a patrol in Baghdad in this file photo from Oct. 23, 2011. (PHOTO: JOHN LAUGHTER/U.S. ARMY

The White House announced Wednesday the will deploy at least 400 additional U.S. troops to Iraq where they will assist with the training of Iraqi forces at a new base in Anbar Province. The plan is to train a 10,000-strong majority Sunni fighters and 3,000 new Iraqi security force soldiers as part of a bid to retake the city of Ramadi, the capital of Anbar province that fell in May.

The move also comes on the heels of the Islamic State’s public execution of gay men by the terror army, a lambasting by the Iranian prime miniter and the president’s embarrassing admission at the G-7 summit this week that his administration still does not have a strategy to confront the threat.

But it is also the latest ironic twist in the president’s incoherent policy in Iraq, the same president who ignored the advice of his generals to move forward with the withdrawal of American forces in 2011. There are currently just over 3,000 U.S. troops in Iraq, most of which are U.S. special operations forces task with training an army that has little confidence in both the U.S. commitment to them, or themselves.

Iraqi Prime Minister Haider al-Abadi, during his speech at a conference in Paris last week, blamed the U.S.-led coalition that is training his security forces for the spread of ISIS in his country.

“Why are there are so many terrorists from Saudi Arabia, the Gulf, Egypt [and] European countries,” al-Abadi demanded to know. “If it is due to the political situation in Iraq, why are Americans, French and German [fighters] in Iraq?”

Meanwhile, the Shiite-led government in Baghdad has for years failed to train and arm the Sunni tribesmen, while hundreds of American soldiers and Marines have been sitting on their hands awaiting orders and trainees at the al Asad training facility in western Iraq for weeks.

In a somewhat but typical contradiction, a Defense Department official said Tuesday that recent Iraqi trainees at al Asad were pulled to join the fight in Karmah and Samarra and to provide security for a Shiite pilgrimage in the area. They said they should return to training indigenous soldiers in a few weeks, and that a total of 8,920 Iraqi troops have received training at four different sites throughout Iraq, with another 2,601 in another phase of training.

Pennsylvania Teachers Get Tax-paid Training in Bowing to Allah