HomeNewsPoliticsPennsylvania Teachers Get Tax-paid Training in Bowing to Allah

Pennsylvania Teachers Get Tax-paid Training in Bowing to Allah 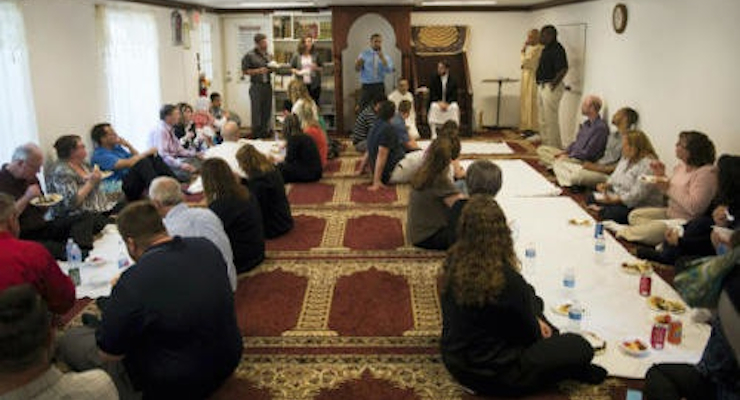 Fifty or so teachers and administrators with the Lebanon School District in Pennsylvania, including the superintendent, were just given a day of specialized training on Islam – at taxpayers’ expense – that wrapped with them hitting the floors of a local mosque, in the required shoeless fashion, and partaking of the faith’s call to prayer.

Or better yet, how about imaging this “what if” scenario: Fifty or so teachers and administrators with one Pennsylvania school district were just given a day of specialized training on the Baptist faith – at taxpayers’ expense – that wrapped with them hitting the sanctuary of a local church and joining the congregation in prayer.

Now is it outrageous?

The Lebanon Daily News first reported the day-long Muslim-inspired venture, describing it as a way for school officials to learn more about their district’s growing Arabic population – in much the same vein they would for, say, Hispanics.

In other words, it’s a cultural divide thang.

At the same time, there’s no way the politically correct crowd would handshake any deal that brought teachers to a Christian church during the tax-paid school day. In that instance, the loudly proclaimed denial would be: “It’s separation of church and state!”

But with Islam, at the Lebanon school district, the Islam training and mosque visit seemed necessary educational experiences.

That said, the workshop was headed up by Mohamed Omar, a former teacher aide and Arabic translator for the school district who also previously served as president of the mosque. Omar, who moved from Egypt to American in 2000, is now employed by the Department of Human Services in Philadelphia, but was able to take a day off work to instruct the teachers and administrators, and bring them to the mosque.

There, teachers removed their shoes, in line with mosque requirements, and joined several members of the facility in sitting on the floor for a quick 20-minute instructional on the ins and outs of Islamism, and how the faith compares to Christianity. Some even bowed to Allah, the Daily Caller reported.

“We believe we will be judged by God,” Omar told the participants, the local newspaper reported. “The more good deeds we do, God will forgive us in the end. … You must work. Faith without work will not be accepted.”

Mosque founder Hamid Housni was apparently amazed at the school’s outreach, calling it “the first time ever in the United States that a school district goes to a mosque” and saying “we don’t have words to explain to you how we appreciate that.”

“It’s important that we educate ourselves about cultures that are different from our own and that we try to eliminate some misunderstandings,” she said, EAGNews.org reported. And notably, the lessons she learned?

Except – we don’t. One only has to look to ISIS to see how the Koran’s interpreted by many Muslims. Or, to the many nations in the Middle East and their views of Israel. Or, at a burqa-clad female. If teachers want to educate themselves on the pros and cons of Islam, that’s fine, so long as it’s on their own time. But the bigger issue is this: Should taxpayers be paying for teachers to bow down to Allah during the school day?

Talk about a propaganda tool. We can only hope teacher Book’s reaction to the training session wasn’t representative of what all 50 of those in attendance learned as well.