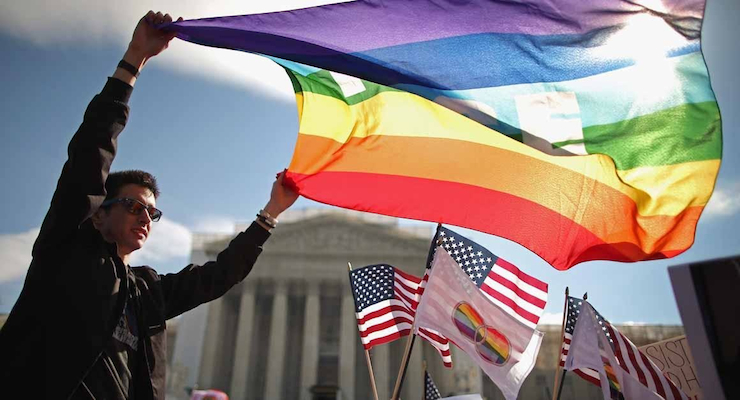 In a legally broad 5-4 ruling, the Supreme Court has ruled that gay marriage is legal in all 50 states under equal protection in the Fourteenth Amendment. Further, marriage is a fundamental right, according to Justice Anthony Kennedy and the liberal majority.

“No union is more profound than marriage, for it embodies the highest ideals of love, fidelity, devotion, sacrifice, and family. … [The challengers] ask for equal dignity in the eyes of the law. The Constitution grants them that right,” Justice Kennedy wrote for the majority. “It is now clear that the challenged laws burden the liberty of same-sex couples, and it must be further acknowledged that they abridge central precepts of equality.”

While many experts had expected the ruling to be a narrow one, it was not indeed.

“Especially against a long history of disapproval of their relationships, this denial to same-sex couples of the right to marry works a grave and continuing harm,” Kennedy wrote. “The imposition of this disability on gays and lesbians serves to disrespect and subordinate them. And the Equal Protection Clause, like the Due Process Clause, prohibits this unjustified infringement of the fundamental right to marry.”

“Their hope is not to be condemned to live in loneliness, excluded from one of civilization’s oldest institutions,” he added wrote. “They ask for equal dignity in the eyes of the law. The Constitution grants them that right.”

Chief Justice Roberts, who was on the receiving end of Justice Antonin Scalia’s dissent Thursday, wrote a blistering dissent of the majority opinion. Roberts ripped the court’s arrogance for redefining a thousands-years-old institution and declaring a new fundamental right using authority they did not have.

“The majority’s decision is an act of will, not legal judgment,” Chief Justice Roberts wrote. “The right it announces has no basis in the Constitution or this Court’s precedent. As a result, the Court invalidates the marriage laws of more than half the States and orders the transformation of a social institution that has formed the basis of human society for millennia, for the Kalahari Bushmen and the Han Chinese, the Carthaginians and the Aztecs. Just who do we think we are?”

Roberts warned that gay marriage activists further condemned their cause akin to Roe v. Wade, and the court allowed them to do so. Effectively, Roberts says, the majority turned the country into a nation governed by men, rather than laws.

But this Court is not a legislature. Whether same-sex marriage is a good idea should be of no concern to us. Under the Constitution, judges have power to say what the law is, not what it should be. The people who ratified the Constitution authorized courts to exercise “neither force nor will but merely judgment.” The Federalist No. 78, p. 465 (C. Rossiter ed. 1961) (A. Hamilton (capitalization altered). Although the policy arguments for extending marriage to same-sex couples may be compelling, the legal arguments for requiring such an extension are not. The fundamental right to marry does not include a right to make a State change its definition of marriage. And a State’s decision to maintain the meaning of marriage that has persisted in every culture throughout human history can hardly be called irrational. In short, our Constitution does not enact any one theory of marriage. The people of a State are free to expand marriage to include same sex couples, or to retain the historic definition.

Today, however, the Court takes the extraordinary step of ordering every State to license and recognize same-sex marriage. Many people will rejoice at this decision, and I begrudge none their celebration. But for those who believe in a government of laws, not of men, the majority’s approach is deeply disheartening. Supporters of same-sex marriage have achieved considerable success persuading their fellow citizens—through the democratic process—to adopt their view. That ends today. Five lawyers have closed the debate and enacted their own vision of marriage as a matter of constitutional law. Stealing this issue from the people will for many cast a cloud over same-sex marriage, making a dramatic social change that much more difficult to accept.

Judge Andrew Napolitano, a PPD columnist and FOX News Senior Legal Analyst, said “Roberts’ dissent makes Scalia’s read like a Christmas card.” Scalia joined Roberts’ dissent in full, but wrote “separately to call attention to this Court’s threat to American democracy,” adding that “it is not of special importance to me what the law says about marriage. It is of overwhelming importance, however, who it is that rules me.”

Scalia argued that the debate over gay marriage is “exactly how our system of government is supposed to work,” and further noted when the 14th Amendment was ratified in 1868, “every state limited marriage to one man and one woman, and no one doubted the constitutionality of doing so.”

Scalia called the majority opinion “a naked judicial claim to legislative—indeed, super-legislative—power,” adding the court’s “highly unrepresentative panel of nine” has violated “a principle even more fundamental than no taxation without representation.”