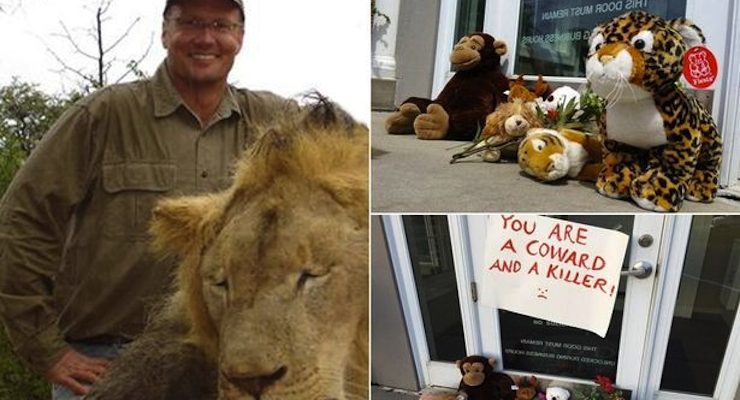 Walter Palmer with a different lion, and messages outside his dental surgery office.

BOZEMAN, Mont. — That picture of Cecil the lion’s corpse and the American dentist posing triumphantly over it was ghastly. Cecil had apparently been lured out of a safe haven in Zimbabwe and illegally shot.

It happens that the Cecil story appalled many of the hunting and fishing writers gathered here by the Theodore Roosevelt Conservation Partnership. The partnership represents sportsmen dedicated to maintaining wildlife habitats.

Its members often see themselves squeezed between other environmental groups hostile to hunting and the “slob hunters” they believe sully the sport. And they feel underappreciated as protectors of the wild environment. Hikers and campers pay far less for conservation than they do.

“Cecil was an absolute disaster on multiple fronts,” Don Thomas, a well-known outdoor writer and co-editor of Traditional Bowhunter Magazine, told me. From what is known, Thomas places most guilt on the dentist’s hunting guides. It is their responsibility to know the laws and see that hunters abide by them.

“The hunter’s errors seem to be more a matter of sleaze factor than of illegality,” Thomas added, though he is not cleared of the latter.

But Thomas also has a problem with the Disney-fication of Cecil — “taking a wild lion, giving it a name and turning it into a faux pet as a tourist attraction.” The biggest threat to African lions, he explained, is not hunters but the loss of wild habitat through human overpopulation, development and climate change.

What is ethical hunting?

Ethical hunters have long condemned “trophy mania,” that is, measuring the experience merely by the size of the antlers harvested.

The general public, meanwhile, does not grasp how much conservation is paid for by hunters and anglers. Hunting and fishing license and permit fees largely go toward habitat restoration.
The Federal Aid in Wildlife Restoration Act of 1937 taxes the sale of hunting gear. The proceeds, more than $12 billion so far, go to state wildlife agencies for conservation. A similar tax on fishing equipment followed the 1937 law. Buy a fishing rod and you pay the excise tax. Buy a sleeping bag and you don’t.

In 1900, fewer than 500,000 white-tailed deer remained in North America. Extensive deforestation, poaching and over-harvesting had decimated the population of deer, as well as of turkeys and ducks. Now there are 30 million white-tailed deer.

The complaints nowadays are of too many deer — and with reason. “Too many deer imperil the health of the forest, removing forage that other species rely on,” he said.

Many hunters and anglers feel right at home in the locavore movement, which promotes food grown locally. They say their relationship with the hunted dinner is far more intimate than with a plastic-wrapped chopped meat shipped from wherever.

When his family says grace over a meal, it thanks the animal itself, Murphy said. “I’ve never felt that way over a Big Mac.”

Furthermore, the game animal on the dinner table had probably enjoyed a far fuller life in the wilds than the penned cow turned into hamburger. These hunters have a point.
The Cecil story should have little to do with them.

Budget Myths and Facts for the 2016 Campaign