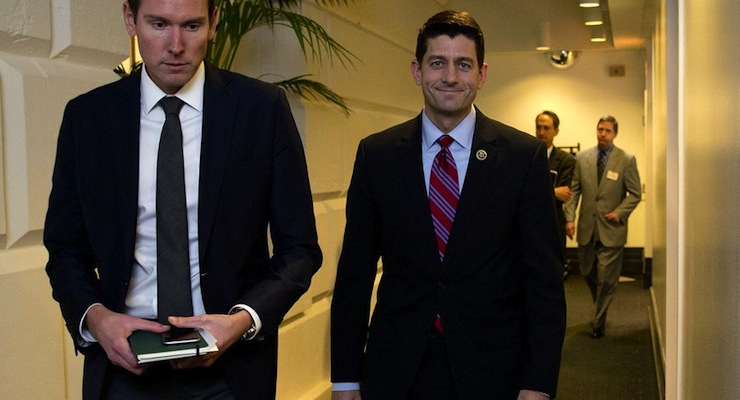 Rep. Paul Ryan, R-Wis., right, walks from a meeting on Capitol Hill in Washington, Monday, Oct. 26, 2015. Speaker John Boehner is pressing ahead with one last deal as he heads for the exits, pushing to finalize a far-reaching, two-year budget agreement with President Barack Obama before handing Congress’ top job over to Ryan this week, congressional officials said Monday. (Photo: Carolyn Kaster/AP)

Rep. Paul Ryan, R-Wis., the man all but certain to become the next speaker of the House, announced he will support the two-year budget deal GOP leaders negotiated with the White House. The announcement by Ryan comes just one day after the deal was struck in a process that he said “stinks.”

“What has been produced will go a long way toward relieving the uncertainty hanging over us,” Ryan said in a statement. “That’s why I intend to support it.”

The agreement would not only keep the government open but also raise the debt ceiling through 2017, increase spending by roughly $80 billion over the next two years. Outgoing Speaker John Boehner, R-Ohio, said it was a “good deal” juxtaposed to the alternative, which was another continuing resolution (CR) and potential shutdown showdown with President Obama, who became the first modern president to veto a defense bill in order to squeeze the GOP for more spending.

“House Speaker John Boehner is a lame duck so he has nothing to lose, and Senate Majority Leader Mitch McConnell is desperate to avoid any confrontation with Democrats before the next election,” Senate Conservatives Fund President Ken Cuccinelli said in an email Wednesday morning. “This is exactly why so many Americans disapprove of the GOP leadership. Instead of fighting for less government and more freedom, the Republican establishment is more interested in political posturing.”

Yet, despite facing serious criticism from conservatives in the House and Senate, the deal is likely to pass and will not derail Ryan’s march to the gavel. Ultimately, as Boehner said in a press conference on Tuesday, the deal aims to “clean the barn” for Ryan and avoid big fights with conservatives over spending and reform.

RNC Chair Reince Priebus: CNBC Should Be Ashamed of How This Debate Was Handled"