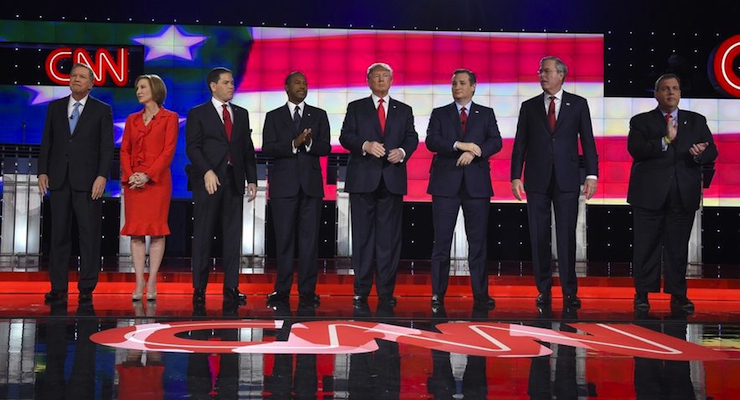 I’m going to use my post Republican debate analysis to go out on a not-so long limb and declare former Florida Gov. Jeb Bush’s bid for the Republican nomination a failure. It’s over, even if Bush, Fox News and Charles Krauthammer haven’t realized it yet.

In hindsight, it never really started and, while his debate performance wasn’t as impressive as Karl Rove would have you believe, this is a limb that I first crawled out on in April, 2014. In a response to an “analysis” by Amy Walter in the Cook Political Report, we pushed backed on the presumptive frontrunner status Walter and others prematurely handed to Bush based on two arguments.

First, the impact of super PACs had the ability to turn “conventional wisdom” on its head. Texas Sen. Ted Cruz, who has thus far raised the second largest war chest behind Bush, has unequivocally proven my analysis correct. Second, the “party wins” theory, which holds the candidate with the most Establishment endorsements inevitably prevails, had serious problems before the emergence of super PACs, which have given “outsider” candidates the ability to remain viable and competitive in the face of overwhelming adversity from the Establishment-media alliance.

This is particularly true of the Republican Party juxtaposed to the Democratic Party that influences its primary with superdelegates. Still, in fairness to the former Florida governor, the PPD Election Projection Model had long-maintained Bush had all the historical fundamentals on his side to win the nomination.

Despite Bush’s super PAC burning through nearly half of the $103 million it brought in during the first half of the year, he is currently polling at a level most surveys cite as their margin of error. Right to Rise PAC raised only $13 million in the five months that have followed, according to a person familiar with the numbers who spoke to The Washington Post.

That said, what has actually played out this cycle is even simpler to break down than my initial argument. What has eluded most pundits and forecasters–who now find themselves increasingly wrong and increasingly confused–is that Gov. Bush failed at meeting the most basic challenge every presidential candidate must meet. Presidential elections are always about the future and each candidate must offer voters a basic justification for their candidacy, an explanation as to why they are best suited to deal with the nation’s challenges.

Jeb Bush has not been able to offer a basic justification for his candidacy outside of his last name, which to voters in today’s Republican and general electorate is a net negative. He represents the past to voters who hate that they have nothing to show for his brother’s entire presidency, plain and simple. As Mark Steyn recently explained in the simplest of terms, Jeb was, and painfully still is, asking Republican primary voters to admit the Bush family “is so indispensable to the Republic” that they must nominate a third Bush; they must concede the Bush family surpasses in historical significance the Adams family.

Instead, Jeb became someone else’s justification for running, i.e. the current frontrunner. I know for a certainty that Donald Trump threw his hat in the ring because he truly believes Bush would’ve won the nomination without him in the field to stop him, the country is in deep trouble and “the last thing this country needs is another Bush” in the White House. A plurality of the party’s voters agree, obviously, which makes the John McCain-like political comeback they are hoping for in New Hampshire more than unlikely.

Worth noting, Sens. Ted Cruz, Marco Rubio and others have also put forward a justification for their candidacy, not just Trump. But it was Trump that Bush called “a chaos candidate” Tuesday night, which is at best ironic. At first it was absolutely puzzling to me. How could Gov. Bush not have a strategy to address the last name, the Iraq War, and put forward a justification for his candidacy? He was supposed to love his father and brother and yet still be his own man.

But, in reality, that was never the strategy at Bush headquarters. As a true testament to just how out-of-touch the Bush Establishment and their million-dollar consultants are, they were so deluded to think the name and the money would be enough. The governor spoke about the base of the party with contempt for months. He ignored media appearances as if the journalists had leprosy and only started parading out Danny Diaz to talk with Jenna Lee midday on Fox News in October, when it was far too late.

Now, with it all unraveling, the pressure that comes with taking over a hundred million dollars from big donors who expect results was showing at the fifth Republican debate in Las Vegas.

Again, it’s too little, too late.

“He has failed in this campaign, it’s been a total disaster. Nobody cares,” Mr. Trump said on Tuesday night. He later added that Bush started next to him on the stage, but has been moving farther and farther away, and would soon fall off.

He’s already off. His campaign has already failed.

Most pontification and post debate analysis begins by declaring winners and losers. So, in closing, let me play along.

Donald Trump, the current frontrunner, in the end was the winner of the debate because he maintained his position by doing nothing to threaten his standing. Sen. Cruz, the surging inside-outsider, won the debate in his own respect because, despite the opinions of Rove and Krauthammer, voters by a wide margin said he got the best of Sen. Rubio. Of the 116 respondents tracked by PPD since the beginning of the cycle, 78 said Cruz was more believable in the debate exchanges over immigration and metadata collection.

New Jersey Gov. Chris Christie had a strong performance that did himself a lot of good. With Jeb out of the race and Gov. John Kasich falling short, he can and I suspect will use the debate to continue his momentum following his not-so insignificant endorsements in the Granite State.