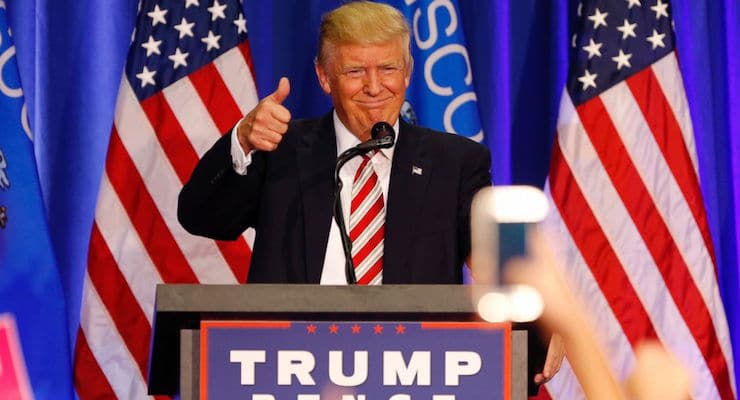 Republican presidential candidate Donald Trump expanded his “law and order” pitch to black voters at a rally in West Bend, Wisconsin on Tuesday. Mr. Trump, who is attempting to refocus and reshuffle his campaign, made the appeal amid the unrest in Milwaukee, which was sparked on Saturday after a police officer fatally shot 23-year-old Sylville Smith, whom officials say was armed and had an extensive criminal record.

“The violence, riots and destruction that have taken place in Milwaukee is an assault on the right of citizens to live in security and to live in peace,” Mr. Trump said at the rally, held at the Ziegler Building at the Washington County Fair Park & Conference Center in West Bend. “Law and order must be restored. It must be restored for the sake of all but most especially for the sake of those living in the affected communities, of which there are many.”

Asking for “the vote of every single African-American” who is fed up and wants a better future for themselves and their children, the GOP presidential candidate said “law-abiding African-American” are suffering as a result of decades-long Democratic rule in the inner cities. He promised to bring opportunity and reform in education, the economy and policing. Prior to his slide in the polls, Mr. Trump had enjoyed significantly higher support among black voters than previous Republican nominees, particularly in battleground states such as Ohio, Pennsylvania and North Carolina.

“The main victims of these riots are law-abiding African-American citizens living in these neighborhoods,” he added. “It’s their job, it’s their homes, it’s their schools and communities which will suffer the most as a result. There is no compassion in tolerating lawless conduct for anyone. Crime and violence is an attack on the poor and will never be accepted in a Trump administration.”

Trump slammed the more false than not leftwing media narrative over race relations and policing incidents, which Democrats have rushed to take advantage of in the wake of a series of shootings beginning in Ferguson, Missouri. The refusal to indict Officer Darren Wilson, who was the victim of a false “hands up, don’t shoot” media narrative in the shooting death of 18-year-old Michael Brown, sparked riots and widespread destruction. It also resulted in less pro-active policing and subsequent increased crime rates in the majority black neighborhood.

“Every time we rush to judgment with false facts and narratives, whether in Ferguson or in Baltimore and foment further unrest, we do a direct disservice to poor African-American residents hurt by the high crime in their community, a big, big unfair problem. During the last 72 hours protesters have raged against the police here in Milwaukee.”

He noted that it’s “a narrative supported with a nod by my opponent shared directly in the responsibility for the unrest in Milwaukee and many other places within our country. They have fostered the dangerous anti-police atmosphere in America and all throughout America.”

Mr. Trump’s speech came as the campaign has undergone yet another shakeup. Pollster and senior advisor Kellyanne Conway was promoted to campaign manager and Breitbart co-founder Stephen Bannon was named campaign chief executive. Mr. Bannon was once referred to as “the most dangerous man in politics” and Mr. Trump told the Associated Press that Paul Manafort will maintain his current role.