HomeNewsPoliticsInsiders Reveal in WikiLeaks “Wall Street is Pretty Happy” With Clinton, “With Trump, in Despair”

Insiders Reveal in WikiLeaks “Wall Street is Pretty Happy” With Clinton, “With Trump, in Despair” 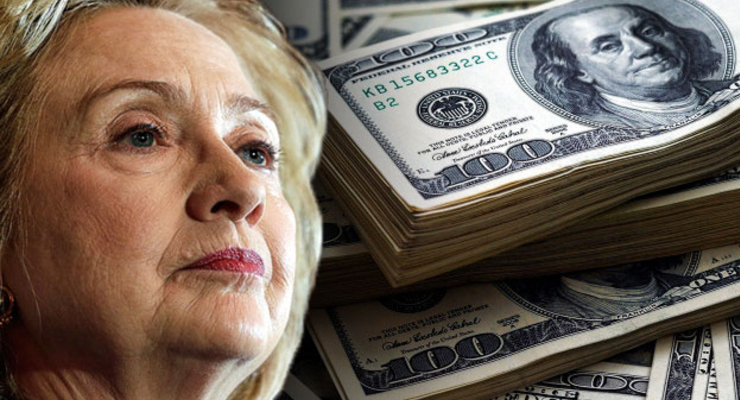 Hillary Rodham Clinton has a long record of using public service to enrich herself, sell out American interests and further her own political ambitions for power.

An email released by the anti-secrecy group WikiLeaks reveals how the Wall Street elites prefer Democrat Hillary Clinton over Republican Donald Trump. A forwarded email from Wall Street insider Robert Wolf to John Podesta, reading simply “Subject: Re:,” offered the Clinton campaign chairman insight into who the big bank elites wanted to see win the presidency and how they felt about each primary candidate.

Clearly, mirroring the big money trail, they prefer Mrs. Clinton over Mr. Trump. In fact, they prefer just about every other candidate other than Donald Trump, including those who ran against the New York businessman during the Republican primary. Further, New York, New York is the only area that Mr. Trump did not carry during the primary (Gov. John Kasich did).

Wolf, the former President and Chief Operating Officer of UBS Investment Bank, as well as Chairman and CEO of UBS’s Group Americas division, wrote to William D. Cohan on February 24, 2016. He then forwarded that conversation to Podesta.

“[sic] so in your humble opinion how would assess what’s likely now to happen on both the dem and rep side of the equation and how is wall street feeling about each…?”, Cohen initially asked Wolf, adding “in other words, i assume with HRC looking better these days, wall street is pretty happy with that and with Trump, wall street must be in despair, especially all those people who were supporting Bush, or walker or the others who have dropped out and where does bloomberg fit in all of this at the moment?”

Cohan was once an investigative reporter for the Raleigh Times before he went on to work on Wall Street for seventeen years as a mergers and acquisitions banker.

Mr. Trump had argued during the Republican primary that former Florida Gov. Jeb Bush and others, including Ohio Gov. John Kasich, were too cozy with Wall Street to deny the wishes of their donors. He was wildly successful making the argument that he was an independent man free to do what was in the voters’ interests, and Wall Street elites were concerned about him.

“I think the business community will show their full support behind the Secretary as most will align with her policies on immigration, education, infrastructure, climate change and the future of the Supreme Court,” Wolf wrote to Cohen. “I am not sure the business community has yet to figure out how to view Trump as the GOP nominee since he hasn’t really shown any granularity to his policiy [sic] vision and it has been more rhetoric.”

Cohen then wrote back clarifying some of the questions he had regarding Wall Street’s feelings toward the candidates.

“in other words, i assume with HRC looking better these days, wall street is pretty happy with that and with Trump, wall street must be in despair, especially all those people who were supporting Bush, or walker or the others who have dropped out,” he wrote.

The email was released along with the transcripts of the former secretary of state’s speeches to Wall Street and foreign investment firms. Mrs. Clinton asked Goldman Sachs to “imagine” how much “everyone is this room would profit” if she doubled NAFTA, the North American Free Trade Agreement. The Democratic candidate now claims she will renegotiate NAFTA but told big donors a few months before that politicians need to have two positions–one public and one private.

Mrs. Clinton also praised the Trans-Pacific Partnership (TPP) and said that her “dream” is to have “open borders” and “open trade” in North America. It’s exactly the reason why Vermont Sen. Bernie Sanders repeatedly called on Mrs. Clinton to release the transcripts and exactly why she wouldn’t do it. With the primary still ongoing and rumors former New York Mayor Micheal Bloomberg might enter the race, Wolf explains Wall Street would be open to an independent bid if Sen. Sanders were to defeat Mrs. Clinton.

“With respect to Mayor Bloomberg, I think he has a real opportunity to enter and do well only if it is Sanders v Trump and only if Secretary Clinton was not the expected Democratic nominee.”

Nevertheless, Wolf then forward the aforementioned conversation over to Podesta.

“You can see Bill’s questions to me,” he wrote along with the forwarded message. “I have become friends with him and can get insights but recall in general he is not a fan of most banks especially Goldman so don’t know his angle yet.”

WikiLeaks Editorial Board Releases Statement on Julian Assange, Ecuador and the U.S. Election