HomeNewsPoliticsWikiLeaks Editorial Board Releases Statement on Julian Assange, Ecuador and the U.S. Election

WikiLeaks Editorial Board Releases Statement on Julian Assange, Ecuador and the U.S. Election 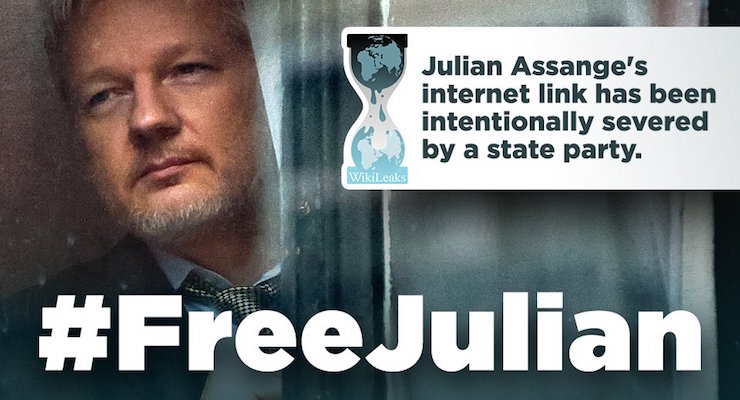 Julian Assange, the founder of WikiLeaks, has been the target of Democratic Party attacks and the Ecuador government who cut his Internet connection after he began releasing hacked documents damaging to Hillary Clinton. The above image began circulating around social media and Internet.

The WikiLeaks Editorial Board released a statement commenting on the status of their founder Julian Assange, the government of Ecuador and the U.S. election. Sources tell People’s Pundit Daily and other news have reported that the Obama administration, more specifically Secretary of State John Kerry, had the Ecuadorian government cut Assange’s personal Internet connection to prevent him from releasing further documents damaging to his predecessor and the president’s hopeful successor–Hillary Clinton.

The documents released thus far have exposed mass corruption in and between Big Media, top officials at the Democratic Party and Hillary Clinton campaign, as well as coordinated efforts to derail the candidacy of Vermont Sen. Bernie Sanders during the party’s primary.

It reads in full below: 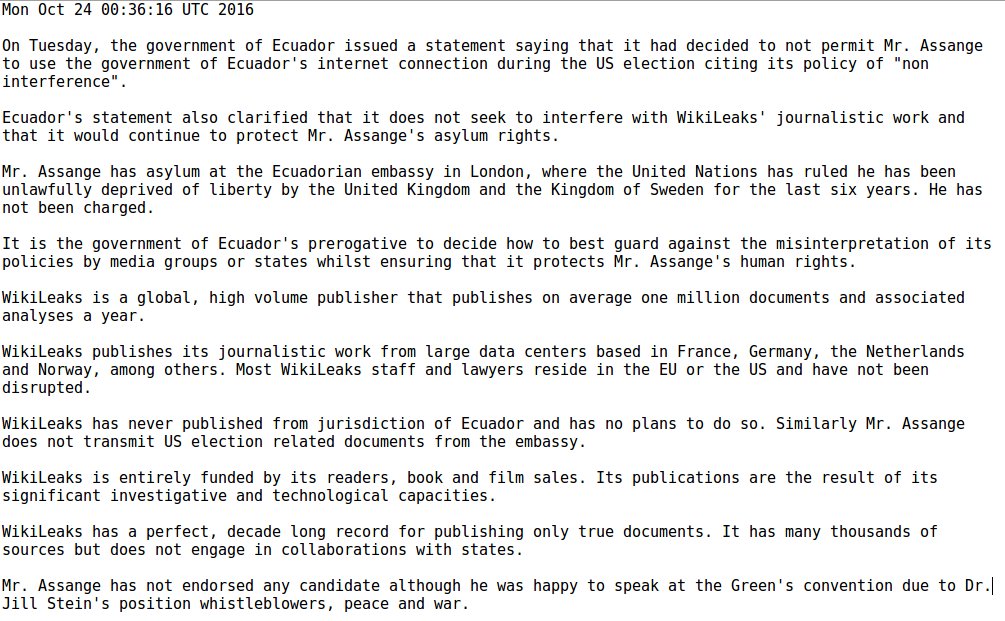 The documents include the transcripts from Mrs. Clinton’s Wall Street and big donor speeches, as well as communications from her campaign chairman John Podesta. Democrats have attempted to divert attention away from the content of the documents and emails toward how they were obtained, which they say came from Russia sources. As of yet, there has been no evidence released to the public to back up the charges of Russian involvement. Assange himself previously alluded DNC staffer Seth Rich was a source for the DNC leaks.

Rich was found dead after being shot in the back in D.C. during what officials first believed to be a robbery. But Metro police say there were no items from removed from Mr. Rich during the course of the murder, including his cell phone and wallet.

Until this past week, Democratic Party operatives and surrogates did not question the veracity of the documents released. However, several have now indicated that certain bits and pieces of information don’t match “their records,” which they have not provided and do not plan to provide to rebut WikiLeaks. The anti-secrecy group has never before released fake or doctored documents obtained for public release.

“WikiLeaks has a perfect, decade-long record for publishing only true documents,” it said in the statement. “It has many thousands of sources but does not engage in collaboration with states.”

Insiders Reveal in WikiLeaks "Wall Street is Pretty Happy" With Clinton, "With Trump, in Despair"