One of the women who accused Republican Roy Moore of sexual advances posted a “Doug Jones for U.S. Senate” video on her very liberal Facebook page. On Thursday, The Washington Post ran a story citing on-the-record interviews with four women who claim that when they were teenagers Judge Moore — in his 30s at the time — attempted to court or date them.

Deborah Wesson Gibson is one of the four women. The Washington Post made an obvious effort to purify the political motivations of the accusers, but clearly omitted significant details about at least Ms. Gibson.

According to campaign reports, none of the women has donated to or worked for Moore’s Democratic opponent, Doug Jones, or his rivals in the Republican primary, including Sen. Luther Strange, whom he defeated this fall in a runoff election.

Corfman, 53, who works as a customer service representative at a payday loan business, says she has voted for Republicans in the past three presidential elections, including for Donald Trump in 2016.

However, a simple review of Ms. Gibson’s social media activity is putting the authenticity of certain details in the report in doubt. The Washington Post, who claimed to have researched campaign reports, somehow overlooked that she was a supporter of Judge Moore’s Democratic opponent, even posting his campaign announcement video to Facebook on September 18.

She also shared a flier to one of his campaign rallies and shared stories about defeating Judge Moore. 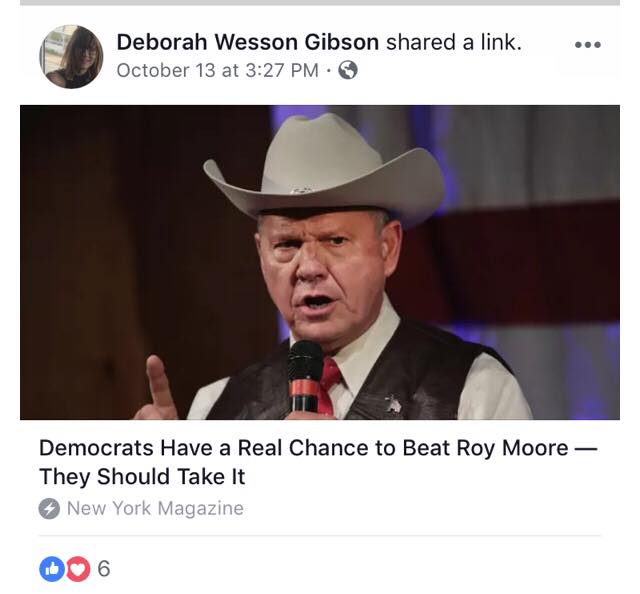 Screenshots taken from the Facebook profile of Debbie Wesson Gibson, one of the four women who accused Judge Roy Moore, the Republican candidate for U.S. Senate in Alabama, of sexual advances when they were underage.

In addition to supporting Mr. Jones, there was one pro-Democrat and anti-Republican post after another, including a “Resistance Report” video by former Clinton Administration Labor Secretary Robert Reich.

Screenshots taken from the Facebook profile of Debbie Wesson Gibson, one of the four women who accused Judge Roy Moore, the Republican candidate for U.S. Senate in Alabama, of sexual advances when they were underage.

Ms. Gibson could not be reached for comment, as her voice mail is full. But she reportedly told AL.com she stood by her comments in The Washington Post interview. AL.com also reported she worked for Hillary Clinton’s campaign as a sign language interpreter.

Ms. Gibson’s company — Signs of Excellence — has offices in Florida and Alabama, providing sign language interpretation to businesses, politicians and government. In other words, she makes money off of government.

While the Facebook page belonging to Ms. Gibson was filled with liberal causes, someone’s political persuasion doesn’t nullify allegations. But it does put them into question when they are intentionally omitted in a report filled with accusations that cannot be proven or disproven.

If you are still wondering about Graham-Cassidy and whether or not you should support it as replacement of the ACA, have a look at who ALL is AGAINST IT and why~

The abomination that is the Graham-Cassidy Bill would disproportionately hurt Americans who are children, veterans, sick, female, and poor.

Today, please call your Senators and then call these Senators and tell them to vote NO on this savage piece of legislation. #SAVEACA

We are witnessing Mother Nature making a bold statement as follows:

“Climate change is real and it’s messing with me, giving me hot flashes! Science is not political, it’s science ~ so you better get it together, Humans!”

While three of the women were above the age of consent, one claims she was 14. The other women did not claim inappropriate sexual conduct and the current age of consent in Alabama is 16.

Leigh Corfman says she was 14 years old when an older man approached her outside a courtroom in Etowah County, Ala. She was sitting on a wooden bench with her mother, they both recall, when the man introduced himself as Roy Moore.

It was early 1979 and Moore — now the Republican nominee in Alabama for a U.S. Senate seat — was a 32-year-old assistant district attorney. He struck up a conversation, Corfman and her mother say, and offered to watch the girl while her mother went inside for a child custody hearing.

Judge Moore is vehemently denying the allegations and the campaign released a separate statement in response.

“This garbage is the very definition of fake news and intentional defamation.”

The glaring omission by The Washington Post is noteworthy and calls their account of how they came across this story into question. Obviously, without a response, Ms. Gibson’s motives aren’t as pure as the liberal paper tried to convey.

Neither Corfman nor any of the other women sought out The Post. While reporting a story in Alabama about supporters of Moore’s Senate campaign, a Post reporter heard that Moore allegedly had sought relationships with teenage girls. Over the ensuing three weeks, two Post reporters contacted and interviewed the four women. All were initially reluctant to speak publicly but chose to do so after multiple interviews, saying they thought it was important for people to know about their interactions with Moore. The women say they don’t know one another.

The Washington Post, which ran numerous similiar stories about President Donald Trump leading up to the 2016 presidential election, has endorsed Mr. Jones in the race to replace Attorney General Jeff Sessions in the U.S. Senate for Alabama. The Post should be called on and expected to elaborate further on this account, given details in their story are clearly false.

People’s Pundit Daily (PPD) was made aware of similiar (if not the same) allegations by allies of Majority Leader Mitch McConnell, R-Kty., shortly before and after Judge Roy Moore defeated his preferred candidate Luther Strange in the primary runoff. We were told the allegations were decades old and there would be no evidence to substantiate them.

Being that it was impossible to substantiate the allegations, we decided it would not be responsible to pursue the story.