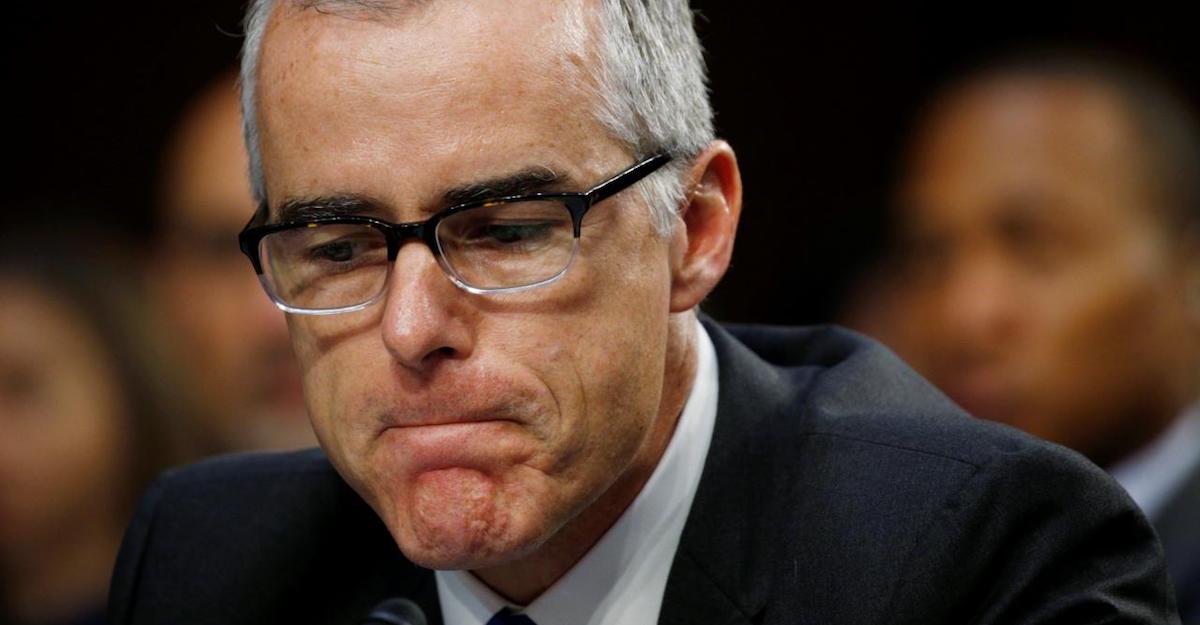 Deputy Director Andrew McCabe has been “removed” from his post at the Federal Bureau of Investigation amid conflicts of interest and ongoing investigations of misconduct. Sources confirm Mr. McCabe will be taking “terminal leave” and will no longer be reporting to work at the FBI.

His vacation will last for a few weeks until his planned retirement in March. Sources also said that he was trying to ride out the scandals he is currently in the center of at the FBI and the Justice Department, including but not limited to his misconduct and conflicts of interest involving the Clinton email case and abuses of the Foreign Intelligence Surveillance Act (FISA).

In 2015, when Hillary Clinton was the subject and target of serious criminal investigations, his wife ran as a Democrat for a Virginia Senate seat. She received at least several hundreds of thousands of dollars from a group tied to Governor Terry McAuliffe, a longtime Clinton ally.

“How can FBI Deputy Director Andrew McCabe, the man in charge, along with leakin’ James Comey, of the Phony Hillary Clinton investigation (including her 33,000 illegally deleted emails) be given $700,000 for wife’s campaign by Clinton Puppets during investigation?” President Donald Trump himself tweeted about that conflict in December.

How can FBI Deputy Director Andrew McCabe, the man in charge, along with leakin’ James Comey, of the Phony Hillary Clinton investigation (including her 33,000 illegally deleted emails) be given $700,000 for wife’s campaign by Clinton Puppets during investigation?

Mr. McCabe’s removal comes before the highly-anticipated release of a 4-page memo detailing widespread FISA abuses, and only one day after FBI Director Christopher Wray read the memo.

It also comes before an equally anticipated report by Justice Department Inspector General Michael Horowitz. The latter will be the result of numerous investigations into misconduct on behalf of numerous officials, including Mr. McCabe and his former boss James Comey.

Mr. Horowitz said late last week his office “succeeded in using forensic tools to recover text messages” between anti-Trump FBI officials Peter Strzok and Lisa Page. The FBI agent and lawyer were involved in an effort to undermine President Trump before and after the 2016 presidential election.

They discussed needing to talk to “Andy” about an “insurance policy” in the event President Trump defeated Mrs. Clinton, a reference to Mr. McCabe. Subsequent texts and other reports indicate that the insurance was the so-called “Russia collusion” investigation.