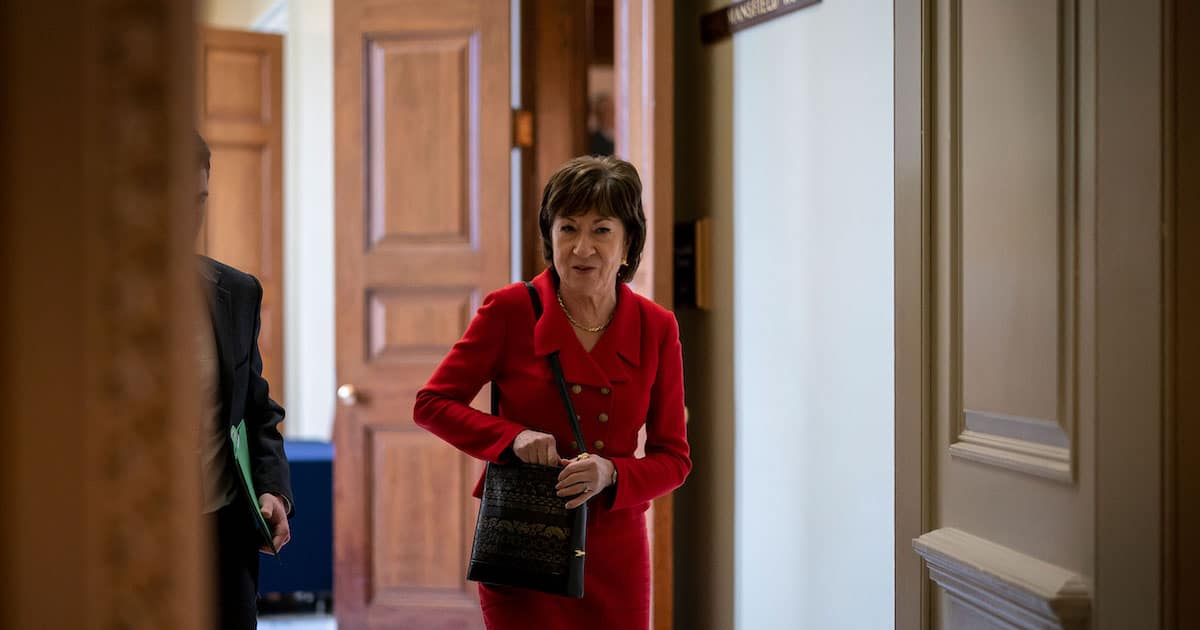 Senator Susan Collins, R-Maine, announced on the floor of the U.S. Senate that she will vote to acquit President Donald J. Trump on both articles of impeachment.

“During the Clinton impeachment trial, I argued we must conclude beyond a doubt that the Constitution would be injured by allowing him to remain in office,” Senator Collins said. “I voted to acquit President Clinton even though the House managers proved that he did commit a crime because it did not meet that threshold.”

She added that it was “clear from the July 25 2019 phone call between President Trump and Ukrainian President Volodymyr Zelensky that the request for an “investigation into the Bidens activities was improper.”

On both Article I Abuse of Power and Article II Obstruction of Congress, Senator Collins said the Democrats’ own actions undermined their argument. On the first article, she noted the House did little to support its assertion in that the president would damage the country if allowed to remain in office.

“The fact that the House delayed transmitting the articles of impeachment to the Senate for 33 days undercuts this argument.” “For all the reasons I have mentioned, I will vote to acquit on Article I.”

Senator Collins lambasted House Democrats for withdrawing a subpoena seeking testimony and for chosing not to issue a subpoena to John Bolton, the national security advisor the House identified as a key witness.

“The House actually withdrew a subpoena seeking testimony” and “chose not to issue a subpoena to John Bolton, the national security advisor the House has ID’ed as a key witness.”

“In this case, however, the House chose to skip the basic steps of judicial adjudication and rushed right to impeachment.” “Therefore, I will vote to acquit on Article II.”

The U.S. Senate will vote tomorrow on the impeachment and removal of the president. It is widely expected that he will be acquitted on both articles, though the number of votes is still uncertain.

Interestingly, the non-stop, at least 3-year effort to impeachment the president has strengthened him politically.

A Gallup poll conducted from January 16-29 poll—squarely in the middle of the impeachment trial in the U.S. Senate—finds 52% of Americans favor the U.S. Senate acquitting President Trump, while 46% are in favor of a conviction and removing him from office.

President Trump’s approval rating has hit a new high of 49% and half of registered voters say he deserves to be re-elected in November.