HomeNewsScienceScientists Solve the Mars Atmosphere Mystery: “Where Did All the Carbon Go?”

Scientists Solve the Mars Atmosphere Mystery: “Where Did All the Carbon Go?” 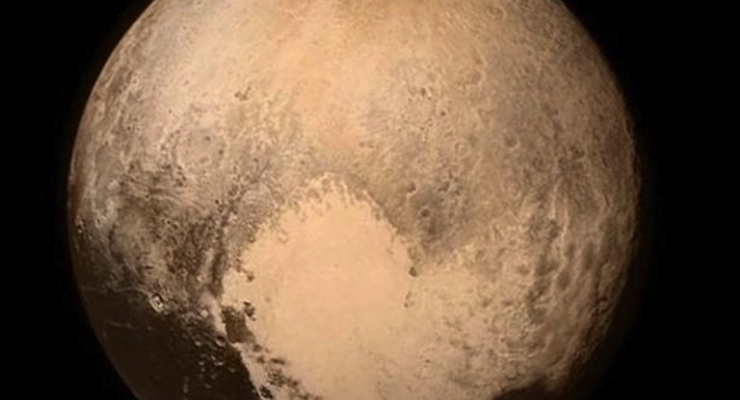 An image of the dwarf planet Pluto as captured by NASA’s New Horizons. (Photo: NASA)

While geological evidence shows the red planet was once a much wetter, warmer place than it is now, the Mars atmosphere mystery has long-puzzled scientists. Now a team of scientists from the California Institute of Technology and NASA’s Jet Propulsion Laboratory, both in Pasadena, offer an explanation of the “missing” carbon, in a paper published today by the journal Nature Communications.

“Our paper shows that transitioning from a moderately dense atmosphere to the current thin one is entirely possible,” says Caltech postdoctoral fellow Renyu Hu, the lead author. “It is exciting that what we know about the Martian atmosphere can now be pieced together into a consistent picture of its evolution — and this does not require a massive undetected carbon reservoir.”

It has been known for sometime that solar wind stripped away much of what was once the thicker Mars atmosphere and, indeed, is still removing tons of it every day. However, scientists have been puzzled as to why they haven’t found more carbon in the form of carbonate, which captured into Martian rocks. 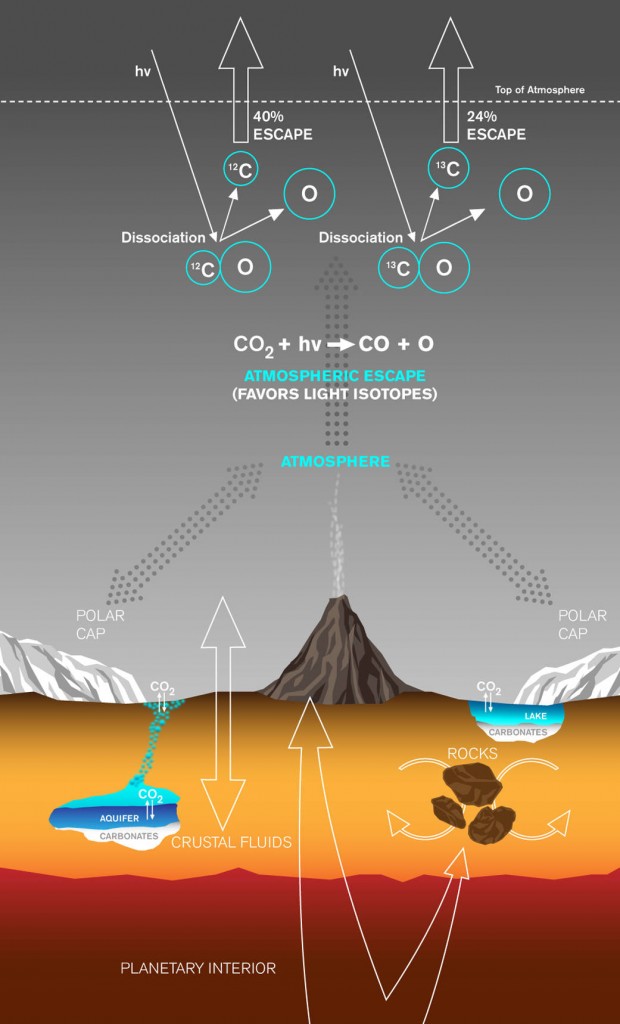 This graphic depicts paths by which carbon has been exchanged among Martian interior, surface rocks, polar caps, waters and atmosphere, and also depicts a mechanism by which it is lost from the atmosphere with a strong effect on isotope ratio.
Credits: Lance Hayashida/Caltech

The solar wind stripped away much of Mars’ ancient atmosphere and is still removing tons of it every day. But scientists have been puzzled by why they haven’t found more carbon — in the form of carbonate — captured into Martian rocks. The new study, unlike the “escaped to space” theory, not only accounts for the “missing” carbon problem, but also does so in a way that is consistent with the observed ratio of carbon-13 to carbon-12, which differ only by how many neutrons are in each nucleus.

“This solves a long-standing paradox,” said Bethany Ehlmann of Caltech and JPL, a co-author of both today’s publication and the August one about carbonates. “The supposed very thick atmosphere seemed to imply that you needed this big surface carbon reservoir, but the efficiency of the UV photodissociation process means that there actually is no paradox. You can use normal loss processes as we understand them, with detected amounts of carbonate, and find an evolutionary scenario for Mars that makes sense.”

Facebook CEO Mark Zuckerberg to Give Away Most of His Wealth