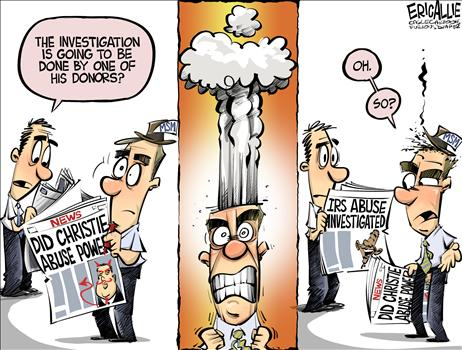 We could think of no example can better to illustrate the liberal media bias in politics than comparing coverage of “Bridge Gate” with the IRS scandal. Don’t get us wrong, because any and all misuses of authority are disgraceful and unworthy of public office, but some are worse than others.

It is hardly worth mentioning that the mainstream media has ignored the infinite and severe Obama administration scandals that involved the woman they are planning a coronation for in 2016, while foaming at the mouth to tear down the man they know will deprive them of such an idol-worshipping event.

Nevertheless, aside from being anecdotal with our evidence, it is nice to see some actual numbers on the lop-sided, bias reporting from the so-called mainstream media. Fortunately, thanks to the Media Research Center, the work has been done for us:

In less than 48 hours, ABC, CBS and NBC deluged viewers with coverage of Chris Christie’s traffic jam scandal, devoting a staggering 88 minutes to the story. In comparison, these same news outlets over the last six months have allowed a scant two minutes for the latest on Barack Obama’s Internal Revenue Service scandal. The disparity in less than two days is 44-to-one. [See a chart below.]

MRC observed coverage between Wednesday through Friday morning, and found Bridge-Gate being the lead story on 11 out of 13 news shows. NBC, the company currently being sued for editing the George Zimmerman 911 call, took the prize, with over 34 minutes.

Although, it was pretty close, as CBS was only beat by NBC by just under 4 minutes, still dedicating more than 30 monotonous minutes. ABC was third with nearly 23 minutes. You would think that the story would go stale, and perhaps they would move on to something important — say, Obama appointing a donor to head up the investigation into the IRS targeting of Tea Party and conservative groups — but no.

It’s getting worse. An updated analysis by the MRC finds the disparity is growing by the day. Over the last six months, NBC covered the IRS targeting for five seconds — five seconds — while CBS covered the story for 41 seconds and ABC a whopping 22 seconds.

It isn’t as if the IRS scandal led nowhere as some liberals sadly contend. The mainstream media blatantly ignored the damning emails from Lois Lerner noting how Democrats were complaining that anonymous donors could be influencing Senate races. Here we have an IRS official actually doing the bidding of a political party, by identifying opponents and subsequently using the power of the federal government to attack political opposition.

Lois Lerner, by the way, responded to the concerns by writing how she hoped that the Federal Election Commission would “save the day.” Obviously, they did. Another partisan bureaucracy who should be defunded and demented, then replaced with someone practical and efficient.

Even when she was forced to resign, the media let her do so quietly, without reporters hounding or asking her for comments or defenses on the way out.

Most recently, House Republicans learned the Justice Department’s investigation into the IRS targeting Tea Party groups has been “compromised,” after the Obama administration outrageously appointed an Obama donor to head up the probe.

I wonder if Obama appointed a Christie donor to head up the Sandy relief investigation, then would the mainstream media find that unethical?

Probably not, because Obama appointed them.

What a bunch of pre-bought and paid-for dunces.