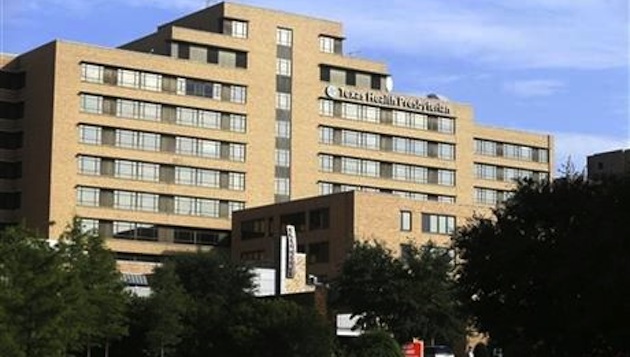 The Texas Department of State Health Services confirmed early Sunday a health care worker at a Dallas hospital tested positive for Ebola in a preliminary test.

The unidentified health care worker at Texas Health Presbyterian Hospital provided care for the late Thomas Eric Duncan, the Liberian national and first person diagnosed with Ebola in the United States. Duncan lied to health officials during the screening process while traveling to the United States.

If the preliminary diagnosis is confirmed, it would be the first known case of the disease being contracted or transmitted in the U.S.

The Texas Department of State Health Service’s website released a statement that said in part that “confirmatory testing will be conducted by the Centers for Disease Control and Prevention in Atlanta.”

“The health care worker is a heroic person who provided care to Mr. Duncan,” Dallas County Judge Clay Jenkins said at a press conference Sunday morning. “We expected it was possible that a second person could contract the virus. Contingency plans were put into place.”

Jenkins echoed CDC Director Dr. Tom Frieden, stressing that Ebola cannot be contracted unless one comes into contact with the bodily fluids of an infected individual.

“You cannot contract it by walking by people on the streets,” he said. “There is nothing about this case that changes that basic premise of science.”

However, Dr. Daniel Varga, of the Texas Health Resource, said the worker was in full protective gear when they provided care to Duncan during his second visit to the hospital.

Little more was offered on the worker and Varga said the family of the worker has “requested total privacy,” but he also said the health care worker reported a fever Friday night as part of a self-monitoring regimen required by the CDC.

Dallas Mayor Mike Rawlings said the Dallas Fire Department’s rescue hazmat team has decontaminated any open areas of the health care worker’s apartment complex. He also said officials have knocked on every door within a block of the apartment and have spoken with every person that came to the door. Officials have been placing reverse 911 calls to residents within a four block radius of the apartment complex and printed materials have been left at each door.

“Police are standing by to make sure no one enters that apartment complex,” he said.

A team has decontaminated and secured the vehicle the health care worker drove to the hospital. Rawlings said hazmat units will go into the worker’s apartment and clean up the interior Sunday.

“We had this plan in place last week, so when we got this phone call, which we thought we might get, we put an action team in place,” Rawlings added.

“We knew a second case could be a reality, and we’ve been preparing for this possibility,” said Dr. David Lakey, commissioner of the Texas Department of State Health Services. “We are broadening our team in Dallas and working with extreme diligence to prevent further spread.”

Health officials have interviewed the patient and are identifying any contacts or potential exposures. They said people who had contact with the health care worker after symptoms emerged will be monitored based on the nature of their interactions and the potential they were exposed to the virus.

Thomas Duncan, the first person diagnosed with Ebola in the U.S., died Wednesday in Dallas. Duncan, 42, grew up next to a leper colony in Liberia. He fled the country that has suffered from years of war and only returned when it becamse ravaged by the virus.

After lying on a form that screens passengers for past contact with infected individuals, Duncan arrived in Dallas in late September to attend the high-school graduation of his son, who was born in a refugee camp in Ivory Coast and was brought to the U.S. as a toddler when the boy’s mother successfully applied for resettlement.

He had already been exposed to Ebola after he helped a pregnant neighbor who later died from it less than a week before arriving in the U.S. on Sept. 20. For the nine days before he was taken to a hospital in an ambulance, Duncan shared the apartment with several people.