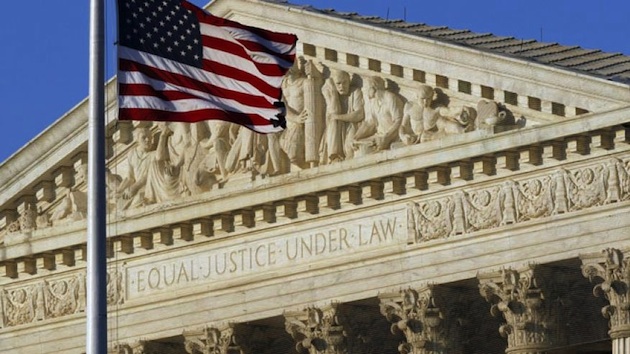 This June 27, 2012, file photo shows an American flag in front of the U.S. Supreme Court in Washington. (Photo: AP)

WASHINGTON – Are you ready for the the Supreme Court ObamaCare Round 2 coverage from media organizations that largely ignored a case with the potential to derail the law? A powerful U.S. appeals court invalidated ObamaCare subsidies for health insurance obtained through the federally-run HealthCare.gov on July 22. The ruling was a major blow to the president’s signature health care law, and all but ensured the constitutionality of the law would once again be decided in the U.S. Supreme Court.

Now, the justices of the high court agreed Friday to hear that challenge to ObamaCare, bringing the law back before the court after it survived a brush with death in 2012. Chief Justice Roberts, a so-called conservative justice, originally voted with the 4 would-be dissenters in the case before switching his vote to the liberal side, fearing a move to uphold what he thought to be an unconstitutional law would be more damning than rewriting the law and changing his vote for political reasons.

But the two cases are very different.

At issue in this case is the legality of subsidies, which opponents argue, are illegal. Indeed, the law specifically prohibits the federal government from handing out subsidies in the event the states choose not to, a state power already decided upon by the court during round 1 of challenges.

However, another federal appeals court on the same day the law was rejected, upheld Internal Revenue Service regulations that allow health-insurance tax credits under the Affordable Care Act for consumers in all 50 states.

Now, opponents of the subsidies argued the Supreme Court should resolve the issue now because it involves billions of dollars in public money. Obviously, at least four justices, which is the number needed to grant review, agreed with the argument. They feel it is important enough to decide now.

“The plain language of the law makes it clear that subsidies are only to be provided for the purchase of health coverage through exchanges setup by the states,” Georgia Republican Rep. Tom Price, a physician, said in a statement. “Nevertheless, the Obama administration and others are asking the courts to disregard the letter of the law and instead rule based on bureaucratic rewrites and revisions.”

White House Press Secretary Josh Earnest, and his fellow-Democrats, argued the congressional intent behind the law was for eligible customers regardless of where they live to receive assistance from the government to subsidize the purchase of health care.

“The ACA is working. These lawsuits won’t stand in the way of the Affordable Care Act and the millions of Americans who can now afford health insurance because of it,” he said in a statement, calling the lawsuit “just another partisan attempt to undermine the Affordable Care Act and to strip millions of American families of tax credits that Congress intended for them to have.”

Whether they successfully argue intent remains unclear, but what is clear is that the Democrat-controlled Congress could not add the provision because former Massachusetts Senator Scott Brown won in an upset special election to replace the late Sen. Ted Kennedy (D-MA), which gave Democrats only a short time to pass an imperfect bill that previously excluded the right of the federal government to dole out subsidies on purpose, for political reasons.

The justices upheld the heart of the law in a 5-4 decision in 2012 in which Chief Justice John Roberts provided the decisive vote, preserving the law’s individual mandate to buy insurance.

This past June, the court again ruled on ObamaCare, this time siding with companies that had religious objections over the law’s requirement to provide contraceptive coverage. The ruling forced the administration to adjust the regulations, but did not seriously disrupt the health law.

However, if the government loses in federal court this time, then it will mean the end of ObamaCare as it stands now.