UPDATE: This forecast has been updated for Monday, October 8, 2018. It can be found here.

The NHC forecast, which along with other models has underperformed juxtaposed to the ECMWF, shows Michael moving inland at southeastern Alabama and the Florida panhandle and into Georgia late Wednesday night. Early Thursday morning, it is expected to weaken to a tropical storm, though still maintaining winds of 50 miles per hour.

The NHC advisory predicts the storm will track almost due north, also putting the Alabama coast in the cone. The concern is that the storm’s path is widespread across the Southeast, and its impact will be felt beyond the Gulf Coast. 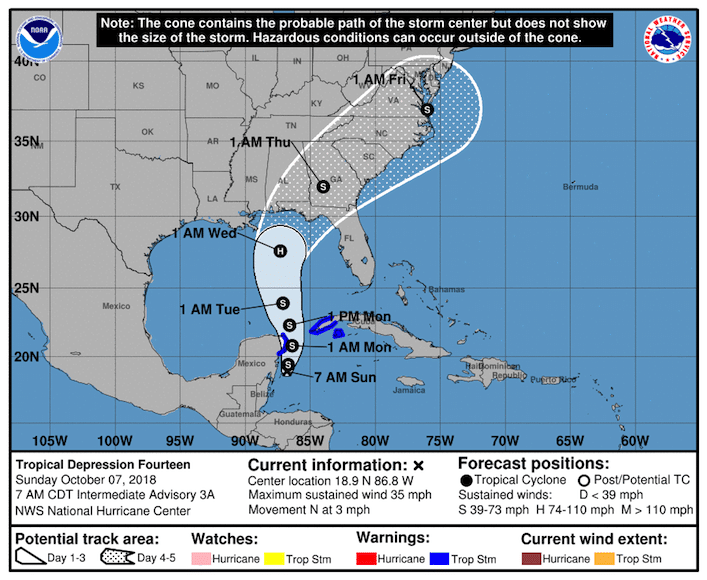 This graphic shows an approximate representation of coastal areas under a hurricane warning (red), hurricane watch (pink), tropical storm warning (blue) and tropical storm watch (yellow). The orange circle indicates the current position of the center of the tropical cyclone. The black line, when selected, and dots show the National Hurricane Center (NHC) forecast track of the center at the times indicated. The dot indicating the forecast center location will be black if the cyclone is forecast to be tropical and will be white with a black outline if the cyclone is forecast to be extratropical. If only an L is displayed, then the system is forecast to be a remnant low. The letter inside the dot indicates the NHC’s forecast intensity for that time:
D: Tropical Depression – wind speed less than 39 MPH
S: Tropical Storm – wind speed between 39 MPH and 73 MPH
H: Hurricane – wind speed between 74 MPH and 110 MPH
M: Major Hurricane – wind speed greater than 110 MPH
Source: National Hurricane Center

“Storm surge, rainfall, and wind impacts are possible over portions of the northern Gulf Coast by mid-week, although it is too soon to specify the exact location and magnitude of these impacts,” the National Hurricane Center said Sunday. “Residents in these areas should monitor the progress of this system.”

The system, currently named Tropical Depression Fourteen, is expected to become Tropical Storm Michael later Sunday and begin to track its northern path through the Gulf of Mexico. The National Hurricane Center forecasts it will move inland as Tropical Storm Michael and the system will maintain some strength as it moves up through Georgia, South Carolina, North Carolina and into Virginia with tropical storm winds of 50 miles per hour and flooding potential on a sort of nor’easter track.

The NHC model predicts Tropical Storm Michael will be in Virginia, near the coast, at 1:00 AM EST Friday next week.

Hurricane Michael is forecast to be a Category 1 storm when it makes landfall, with maximum sustained winds of 75 miles per hour. Hurricane strength is 74 miles per hour.

Gov. Rick Scott to Declare State of Emergency for Counties in Florida Panhandle and Big Bend