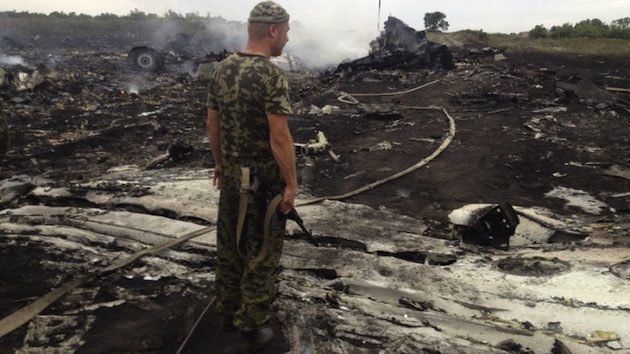 Three audio tapes released by SBU, Ukraine’s security agency, reportedly are the intercepted phone calls between Russian military intelligence officers and Russian separatists. The taped conversation includes the moment the rebels come to understand the plane they shot down was not a Ukraine warplane, but a civilian passenger plane. It could be the evidence that proves Malaysia Airlines Flight 17 was shot down in Ukraine by Russia separatists.

The and transcript — viewable below along with a video — was published in the Kiev Post.

“We have just shot down a plane,” says a man the SBU identified as Igor Bezler, a Russian military intelligence officer and leading commander of the self-proclaimed Donetsk People’s Republic.

That call transpired just 20 minutes after the plane went down and was to a person the Ukraine’s SBU says is a colonel in the main intelligence department of the general headquarters of the armed forces of the Russian Federation Vasili Geranin. If so, Ukraine hopes Russian President Vladimir Putin will be forced to stop the charade at the emergency United Nations Security Council meeting Friday.

But in a second tape released by the agency, two men identified as “The Greek” and “Major” discuss the debris field and the fact the the plane was a civilian aircraft.

“It’s 100 percent a passenger [civilian] aircraft,” Major is recorded as saying. He admitted to seeing no weapons at the site. “Absolutely nothing. Civilian items, medicinal stuff, towels, toilet paper.”

Malaysia Airlines Flight 17 was a Boeing 777 that was flying from Amsterdam to Kuala Lumpur when it was shot down by what U.S. intelligence sources have confirmed was a Russian-made surface-to-air missile near the village of Chornukhine, Luhansk Oblast, which is located roughly 30 miles from Ukraine’s border with Russia.

The second conversation, which has not been verified as authentic by U.S. intel, or at least not so far as they have admit, will put an end to the Russian claims that it was the Ukrainian military that shot the plane down.

Major: “These are Chernukhin folks who shot down the plane. From the Chernukhin check point. Those cossacks who are based in Chernukhino.”

Major: “The plane fell apart in the air. In the area of Petropavlovskaya mine. The first ‘200’ [code word for dead person]. We have found the first ‘200.’ A Civilian.”

Greek: “Well, what do you have there?”

Major: “In short, it was 100 percent a passenger [civilian] aircraft.”

Greek: “Are many people there?”

Major: “Holy [expletive]! The debris fell right into the yards [of homes].”

In the third and final intercepted conversation released by the SBU — which the agency says took place about 40 minutes after the Russian separatists learn they shot down a civilian airliner — Cossack commander Nikolay Kozitsin tells an unidentified separatist member that the fact the Malaysia Airlines plane was flying over the combat zone likely meant it was carrying spies.

“That means they were carrying spies,” Kozitsin allegedly says. “They shouldn’t be [expletive] flying. There is a war going on.”

The attack on Thursday afternoon killed 298 people from nearly a dozen nations, including vacationers, students and a large contingent of scientists heading to an AIDS conference. At least 181 bodies had been located as of yesterday, emergency workers said. The Ukraine government in Kiev, the separatist pro-Russian separatists in eastern Ukraine and the Russia government supporting the rebels all deny shooting the passenger plane down. Despite the overwhelming evidence, Putin and other officials in Moscow and the Kremlin deny backing the rebels.

Russian President Vladimir Putin blamed Ukraine for the downing, saying it was responsible for the unrest in its Russian-speaking eastern regions — but curiously did not actually accuse Ukraine of shooting the plane down. Putin also avoided the question of whether Russia gave the rebels the surface-to-air missile systems.

Ukrainian Prime Minister Arseniy Yatsenyuk described the downing as an “international crime” whose perpetrators would have to be punished in an international tribunal.

Read the full transcript of the intercepted phone call below:

Igor Bezler: We have just shot down a plane. Group Minera. It fell down beyond Yenakievo (Donetsk Oblast).

Vasili Geranin: Pilots. Where are the pilots?

IB: Gone to search for and photograph the plane. Its smoking.

VG: How many minutes ago?

SBU comment: After examining the site of the plane the terrorists come to the conclusion that they have shot down a civilian plane. The next part of the conversation took place about 40 minutes later.

“Major”: These are Chernukhin folks who shot down the plane. From the Chernukhin check point. Those cossacks who are based in Chernukhino.

“Major”: The plane fell apart in the air. In the area of Petropavlovskaya mine. The first “200” (code word for dead person). We have found the first “200”. A Civilian.

“Greek”: Well, what do you have there?

“Major”: In short, it was 100 percent a passenger (civilian) aircraft.

“Greek”: Are many people there?

“Major”: Holy sh__t! The debris fell right into the yards (of homes).

“Greek”: What kind of aircraft?

“Major”: I haven’t ascertained this. I haven’t been to the main sight. I am only surveying the scene where the first bodies fell. There are the remains of internal brackets, seats and bodies.

“Greek”: Is there anything left of the weapon?

“Greek”: Are there documents?

“Major”: Yes, of one Indonesian student. From a university in Thompson.

Militant: Regarding the plane shot down in the area of Snizhne-Torez. It’s a civilian one. Fell down near Grabove. There are lots of corpses of women and children. The Cossacks are out there looking at all this.

They say on TV it’s AN-26 transport plane, but they say it’s written Malaysia Airlines on the plane. What was it doing on Ukraine’s territory?

Nikolay Kozitsin: That means they were carrying spies. They shouldn’t be f…cking flying. There is a war going on.

Israel Invades Gaza Strip, IDF Says 'That's Where We Will Meet Them'