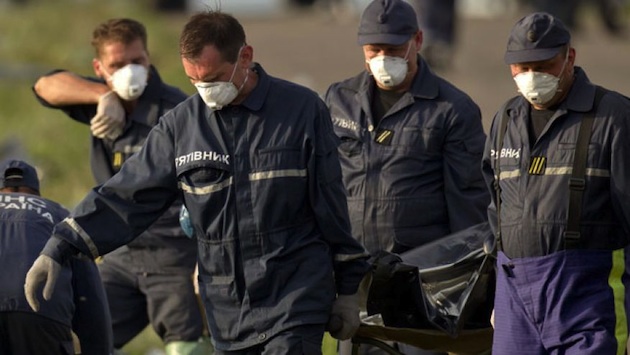 The black boxes for the downed Malaysia Airlines Flight MH17 have been found and will be handed over to the International Civil Aviation Organization, Alexander Borodai, a pro-Russia separatists leader said Sunday.

Russian President Vladimir Putin and German Chancellor Angela Merkel agreed Saturday in a phone call that an independent commission led by the International Civil Aviation Organization should be granted swift access to the crash site.

The announcement follows tragic news from international investigators and Ukrainian officials, who said rebels forced emergency services to surrender the bodies of 196 victims of the plane crash. The victims’ bodies were loaded onto refrigerated trains headed for a rebel-held city.

Borodai said the bodies would remain in refrigerated containers at a train station in the town of Torez until the arrival of an international aviation delegation. International outrage over how the bodies of plane crash victims were being handled is growing, and officials fear that the rebels in control of the territory where the plane came down could be tampering with the evidence.

The Ukraine in Kiev and the Russian separatists both accuse each other of firing a surface-to-air missile Thursday. striking Malaysia Airlines Flight 17 as it flew from Amsterdam to Kuala Lumpur at an altitude of 33,000 feet. All those onboard the flight above the battlefields of eastern Ukraine — 283 passengers and 15 crew — were killed.

While both also deny shooting down the plane, the SBU, Ukraine’s security agency released audiotapes of intercepted phone calls between Russian military intelligence officers and Russian separatists. The taped conversation includes the moment the rebels come to understand the plane they shot down was not a Ukraine warplane, but rather a civilian passenger plane. U.S. defense officials told PPD Friday they have no reason to believe the audio tapes are not valid.

Further strengthening the case against Russia and the Spetzna-backed separatists, an Associated Press journalist saw a Buk missile launcher in rebel-held territory close to the crash site Thursday only hours before the plane was brought down. Also, two other Ukrainian planes were brought down by the same missile system over the past 10 days, which the rebels gleefully took credit for afterward.

Ukraine, Great Britain and the U.S. say Russia has been sending sophisticated arms to the rebels, which of course, Moscow denied.

In a scathing op-ed published in the Sunday Times, British Prime Minister David Cameron said the attack was a “direct result of Russia destabilizing a sovereign state, violating its territorial integrity, backing thuggish militias and training and arming them.”

“We must turn this moment of outrage into a moment of action,” he wrote.

In what was clearly a reference to Merkel, as well as and other European leaders who have blocked efforts to impose tougher sanctions on Russian President Vladimir Putin for Russia’s actions in Ukraine, Cameron said Europe must now “respond robustly.”

Merkel, or Germany in particular, is looking out for their own energy interests, as the neighboring nation fulfills the vast amount of their energy needs through Russian resources.

“For too long, there has been a reluctance on the part of too many European countries to face up to the implications of what is happening in eastern Ukraine,” Cameron wrote.

Meanwhile, Ukrainian Emergency Ministry spokeswoman Nataliya Bystro said workers at the crash site were forced to hand over the 196 bodies they had recovered to the armed rebels.

“Where they took the bodies — we don’t know,” Bystro told the AP. She also said they had no information about the other 102 victims’ bodies, and Michael Bociurkiw, a spokesman for monitors from the Organization for Security and Cooperation in Europe, said it is likely that some bodies were incinerated from the tragic event.

Alexander Pilyushny, an emergency worker combing the crash site for body parts Sunday morning, told the AP it took the rebels several hours Saturday to cart away the bodies. He said he and other workers had no choice but to hand over the bodies.

“They are armed and we are not,” Pilyushny said.