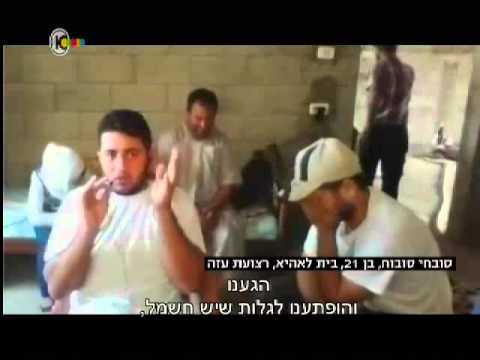 Since the latest round of violence began, Israel has contended  Hamas is pursuing a strategy that intentionally puts Palestinian civilians at risk. Israeli officials say they want civilian body counts to be high to win the public relations war, because they know they cannot win the actual battle.

People’s Pundit Daily did confirm July 12 that the Gaza Interior Minister told residents to ignore Israel’s warnings and to stay in their homes after the Israeli air force dropped leaflets in Gaza warning residents to evacuate their homes. He said the announcement was just Israeli “psychological warfare” and that Israel was simply hoping to create confusion.

In this recently released video, Gaza youth confirms Hamas is in fact preventing people from evacuating their homes to a safer place, which would more than suggest Israeli officials are on the receiving end of unjustified condemnation from the international community and misguided western media outlets. Unfortunately for Israel, some of that criticism has come from the U.S. administration in recent days.

President Obama is under fire for statements made just yesterday, which critics say was another example of the president talking out of both sides of his mouth when it comes to Israel, again.

“As I’ve said many times, Israel has a right to defend itself against rocket and tunnel attacks from Hamas,” the president said in one breathe. “I’ve also said, however, that we have serious concerns about the rising number of Palestinian civilian deaths and the loss of Israeli lives,” he said in another.

Even though the president did mention Israeli deaths, he ended his comments with another reference to the civilian death toll.

“We don’t want to see anymore civilians getting killed.”

Meanwhile, Secretary of State John Kerry was caught on an open mic moment Sunday while doing the talk show rounds, which was only challenged by Chris Wallace during his interview on Fox News Sunday.

“You have a right to go in and take out those tunnels,” he said. “We completely support that and we support Israel’s right to defend itself against rockets that are continuing to come in.”

The UN Security Council and the media have largely ignored the discovery of this network of “complex and advanced” underground “terror tunnels,” as characterized by Israeli military officials. It has been grossly under-reported that Hamas was in dire financial straits prior to the outbreak of fighting, because a tight crack-down of the blockade by Egypt and Israel had stopped cash and weapons from coming into the strip through hundreds of these smuggling tunnels.

If international aid and assistance to replenish their finances was the goal of Hamas all along, then a rising civilian death toll is a proven strategy for the terror group to achieve their goals.