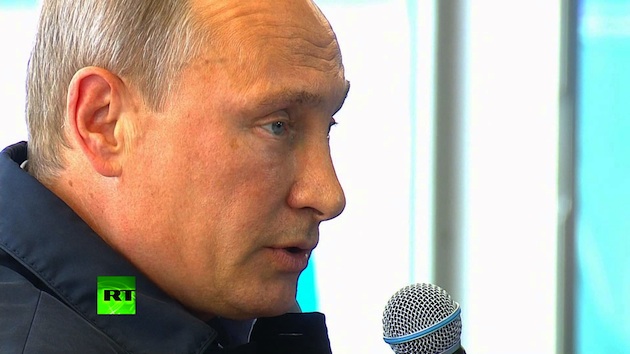 Russian President Vladimir Putin said Friday that the shelling by Kiev in East Ukraine reminds him of the Nazi seize of Leningrad during World War II. “Of course, it is very sad. It reminds me of World War II,” Putin said, “when German forces encircled Russian cities like Leningrad.”

Well, of course, Putin wasn’t even alive during the Nazi seize of Leningrad. He is only 61 years-old and was born on October 7, 1952. The 872 days of the Nazi siege of Leningrad from September 8, 1941, to January 18, 1943, resulted in an almost unspeakable amount of death and grave suffering from famine, thirst and violence. The German army cut off civilians from utilities, water, energy and food supplies. When all was said and done, nearly 1,500,000 soldiers and civilians were killed. and the evacuation of 1,400,000 more, mainly women and children, many of whom died during evacuation due to starvation and bombardment.

The video above and translation below were provided by Russia Today, a Russian state-run media organization.

VLADIMIR PUTIN: Now we see that big cities and small towns alike are encircled by the Ukrainian army, which take direct hits at residential areas to destroy the vital infrastructure and suppress the will of those who resist them. Of course, it is very sad. It reminds me of World War II, when German forces encircled Russian cities like Leningrad, — St. Petersburg, right? — So they encircled St. Petersburg and hit residential quarters with heavy artillery.