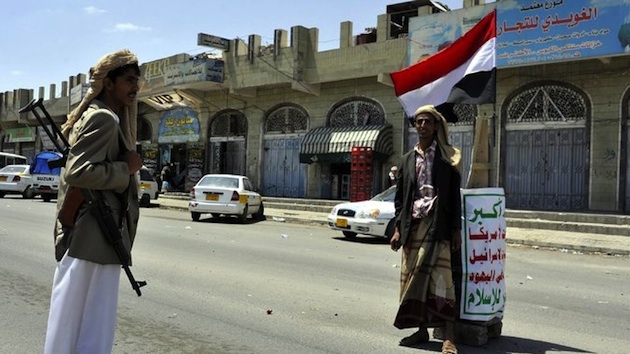 A checkpoint manned by Shiite Muslim rebels near the United States Embassy in Sana. An affiliate of Al Qaeda said it fired a rocket toward the embassy to avenge an American drone strike. (Photo: REUTERS)

A anti-tank rocket was fired at the U.S. Embassy in Sanaa, Yemen on Saturday, wounding several guards, in a revenge attack by an Al Qaeda splinter group. The attack was retaliation for what the group said was an American drone strike that killed two Al Qaeda terrorists in the northern al Jawf province on Friday.

No U.S. personnel or Embassy buildings were hit, but a nearby truck with Yemeni special security forces was hit, injuring the guards occupying the vehicle. It was reported that a barricade blocking the Embassy took the brunt of the blast.

Al Qaeda of the Arabian Peninsula, otherwise known as AQAP, claimed responsibility for the attack on Twitter, tweeting that it had fired upon the U.S. embassy and had injured guards and damaged a vehicle. A rocket was fired from the terrorists’ vehicle using a M72 light anti-tank weapon before driving away, according to a police source who spoke to Reuters.

The U.S. State Department said it had no indication that the embassy was the target of the attack, and confirmed that none of the embassy staff were wounded.

Yemen is on the verge of becoming a failed state despite the Obama administration’s strategy. During his address to the nation on the 13th anniversary of September 11, 2001, President Obama raised eyebrows when compared his strategy to deal with ISIS as one similar to the strategy in Yemen and Somalia.

“This strategy of taking out terrorists who threaten us, while supporting partners on the front lines, is one that we have successfully pursued in Yemen and Somalia for years,” the president said. Experts reacting to the speech expressed concern over the president’s approach, knowing full-well that both countries are breeding grounds for Islamic extremism and violence.

Now, U.S. officials believe that AQAP is attempting to dominate the violence after what has been a competition with the Iranian-backed Houthis, who recently seized control of major government and military facilities in the country. The Shiite Muslim rebels seized control of large parts of the city last week, hours before the signing of an agreement for the creation of a new government. The U.S. strategy has not been effective just as the recently signed accord between the government and terror group has not put an end to the violence.

President Abdu Rabbu Mansour Hadi has raised his concerns with U.S. officials that Yemen is on the path to civil war. Early on Saturday, the so-called “rebels” staged a bold attack on the home of Yemen’s intelligence chief in Sana.

The attack was not the first attempted in recent years, and comes just one day after the U.S. told its citizens to leave Yemen and announced it was cutting down the number of its government employees in the country. Also, in May this year, the embassy said armed individuals had tried to kidnap two of its officers in Sana.