HomeNewsWorldU.S.-Led Airstrikes In Iraq And Syria Are Not Stopping ISIS Advance

U.S.-Led Airstrikes In Iraq And Syria Are Not Stopping ISIS Advance 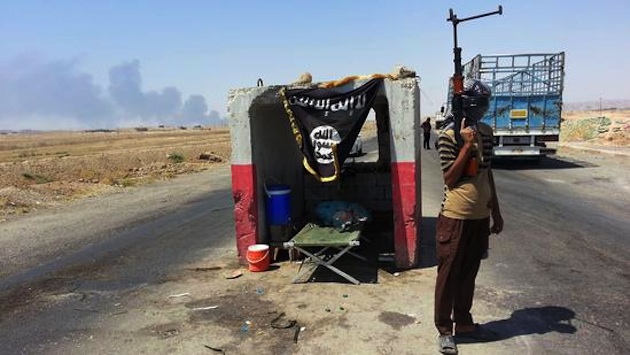 Despite weeks of airstrikes from the U.S.-led coalition, Islamic State fighters are continuing to enjoy battlefield successes in both Iraq and Syria and are expanding territory under caliphate control. Military experts predicted the strategy “to degrade and ultimately destroy” the Islamic State, otherwise known as ISIS or ISIL, would not work and recent developments are proving those predictions true.

In Syria, ISIS fighters are close to capturing the Syrian town of Kobani, located near the Turkish border. Strategically, the fall of Kobani would be a military disaster for the U.S.-led coalition, and would be the most serious setback for Kurdish forces since the start of the campaign last month.

“Air strikes alone are really not enough to defeat ISIS,” said Idris Nassan, a senior spokesman for the Kurdish Peshmerga. The Kurds have been trying to defend against the ISIS advance. Roughly a week ago, Nassan and others made a desperate plea to the media, asking that reporters tell the world that airstrikes alone are not going to stop the inevitable massacre of the nearly 400,000 residents and refugees who are trapped within the city limits.

“Tell the world what is happening” said Rooz Bahjat, a senior Kurdish military officer. “This could be a massacre if no help arrives.”

Kobani would give ISIS control of a large territory of land bordering Turkey and eliminate a strategically vital flank of Kurdish resistance. It would also provide a link between the group’s territory near the ancient Syrian city of Aleppo and its largest operations base at Raqqa, which is located in northeastern Syria.

“They are besieging the city on three sides, Nassan said. “Fighter jets simply cannot hit each and every ISIS fighter on the ground.”

Warplanes believed to be part of the U.S.-led coalition hit militant positions Tuesday as journalists on the Turkish side of the border heard the sound of jets before two large plumes of smoke billowed from ground just west of Kobani. However, a Fox News crew on the Turkish side of the border reported just one U.S. airstrike in the previous five days of heavy fighting. In responding to PPD’s inquiry regarding the thinning bombing campaign, Pentagon officials tried to assure us that militants are targeted every chance they get.

“They, not surprisingly, have gotten better at concealment,” said Navy Rear Admiral John Kirby, a spokesman for the Pentagon. “Before the airstrikes happened, they pretty much had free reign. They don’t have that free reign anymore, because they know we’re watching from the air.”

The Wall Street Journal reported that ISIS forces have already entered the outskirts of the eastern part of the city on Monday. In the previous three weeks, ISIS has taken more than 300 surrounding Syrian Kurdish villages. The Journal also reported that the militants raised their black flag on top of a civilian apartment building and on a hilltop near a checkpoint at the city’s eastern entrance. According to the Associate Press, the black caliphate flag could be seen over the checkpoint by reporters positioned across the border in Turkey.

A report from the Britain-based Syrian Observatory for Human Rights claimed the Kurds forced ISIS to retreat from the eastern part of the town after heavy fighting after midnight Tuesday. However, a local Kurdish militia commander claimed that ISIS fighters were still a mile from the city center, and Reuters has reported that ISIS had taken control of several government buildings in the southwest part of the city.

“Each time a jet approaches, they scatter and hide,” Nassan said of the five attempts by warplanes to use airstrikes to drive the ISIS assault back.. “What we really need is ground support. We need heavy weapons and ammunition in order to fend them off and defeat them.”

In Iraq, the situation on the ground is also deteriorating.

The Institute for the Study of War, which regularly publishes a map titled “Control of Terrain in Iraq,”  is conrming that Hit is under ISIS control. They have placed a watch on Ramadi in light of unconfirmed reports on October 5 that the Iraqi Security Forces in Ramadi are leaving their posts and consolidating on their major base because ISIS has entered the city. 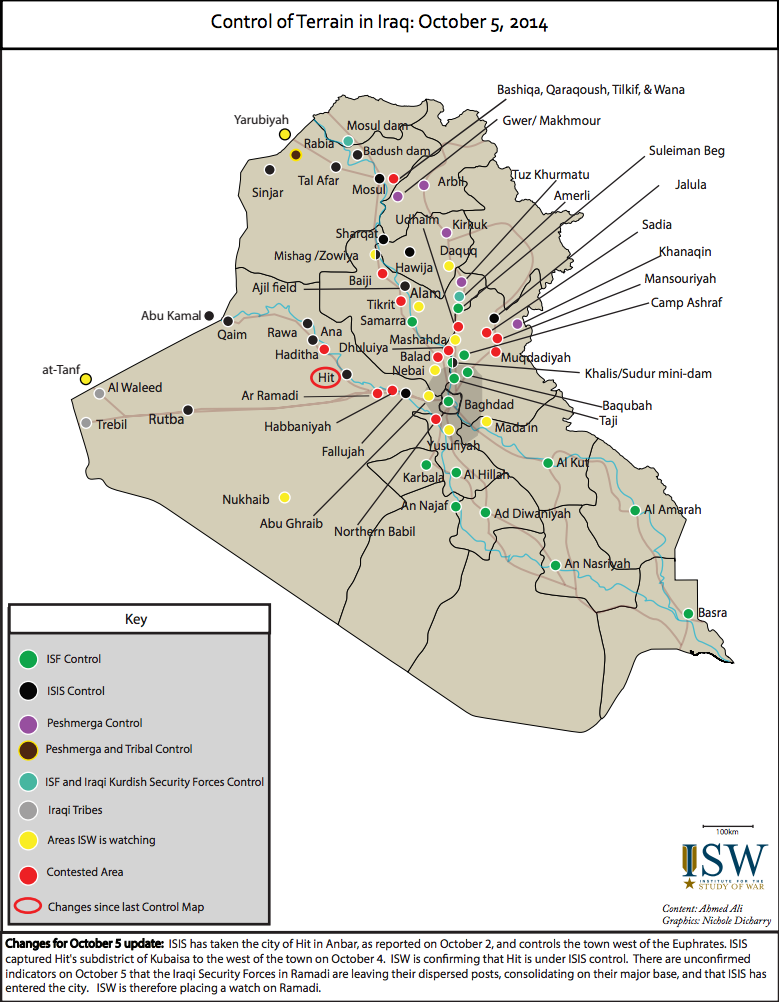 Credit: The Institute For The Study Of War

They have also confirmed that ISIS has taken the city of Hit in Anbar, though their main target remains Baghdad. The previously released August map showed the terror army in control of 14 Iraqi towns and the ever-important Mosul Dam. Even though coalition troops were able to regain control of the dam, the latest map confirmed the Islamic State is still in control of 13 towns. However, villages east of Mosul has moved from Islamic State controlled to “contested,” a small and insignificant improvement considering the U.S.-led airstrikes have been ongoing for more than two months.

Admiral Kirby would not commit to whether or not Iraqi forces could hold Baghdad if ISIS makes an all-out Tet Offensive-like assault. For now, the Shiite muslim population within the city may just be the best hope for the city against such an attack.

Meanwhile, in Kobani, the Kurdish Peshmerga do not such a fall back plan and time is running out.

“We are calling on the international community to help us defend Kobani,” said Nassan in what is now the second plea from a Kurdish commander. The pleas are taking their toll within Turkey, which has a large Kurdish minority population.

Turkish media reported that police in Istanbul and at least six other Turkish cities clashed with hundreds of demonstrators. The private Dogan news agency reported that clashes broke out in several Istanbul neighborhoods overnight. Protesters set up barricades, threw stones, fireworks and firebombs at police and even set a bus on fire. According to reports, one police officer was injured.