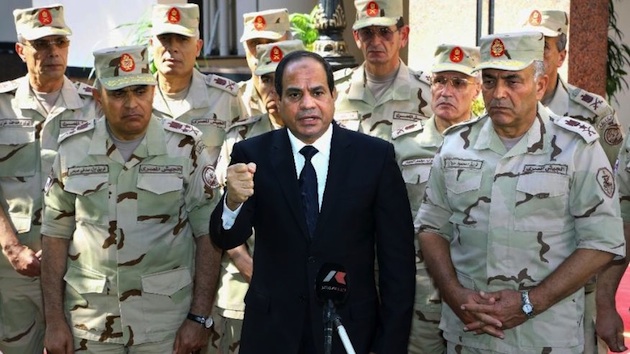 Egyptian President Abdel-Fattah el-Sissi, center, speaks in front of the state-run TV ahead of a military funeral for troops killed in an assault in the Sinai Peninsula, as he stands with army commanders in Cairo. (Photo: AP/MENA/Mohammed Samaha)

Egyptian officials are weighing whether to build a wall along its border with Gaza as they destroy terror tunnels Hamas uses to conduct terrorist attacks. The plan was advanced after Friday’s terrorist attack in northern Sinai that resulted in the death of 33 Egyptian soldiers.

This isn’t the first time Cairo has contemplated the idea of a building an eight-mile wall along its border with Gaza to deter Islamist terrorists from moving in and out of the Palestinian territory. However, this time, according to Egyptian officials who spoke with PPD, the proposal has legs.

“There is a big conspiracy against us,” Egyptian President Abdel Fatah al-Sisi said Saturday in a live televised address. He blamed “foreign powers” for the “existential war” he claimed Egypt is currently fighting against the forces of radical Islam.

While Al Sisi didn’t specifically name each nation, the consensus is that he was referring to Qatar, Turkey and Iran, three known Hamas sponsors.

Following the attack, Egypt said it is backing out of its role as chief mediator between Israel and Hamas. Upcoming talks were the best hope of preserving a Israeli-Hamas ceasefire that has been in place since the end of the summer conflict.

Hamas repeatedly violated prior ceasefire agreements over the summer in a conflict that discovered a vast and sophisticated network of terror tunnels between and beneath the border of Israel and the Gaza Strip. Examinations of the structures found Hamas was using the very concrete supplied by Egypt, Israel, the U.S., and the U.N. for the construction of schools and infrastructure.

Egypt has declared a three-month state of emergency in northern Sinai.

Friday’s terrorist attack was launched on Egyptian troops using old tunnels that haven’t yet been destroyed and newly-dug tunnels that had not been detected. The attack combined the use of a suicide bomber, rocket propelled grenades and roadside bombs. Egypt moved to immediately close the the Rafah crossing between southern Gaza and Egypt, which they say will remain closed, despite Hamas threats.

Hamas leaders have reportedly stated that Gaza will “explode” if the Rafah crossing is not re-opened quickly.

Egyptian officials said that — while the southern border will remain closed — border crossings with Israel will remain open. Currently, humanitarian aid and other supplies are being delivered by Israel to the more than 1.8 million residents of Gaza to elected a Hamas government, which started and endorsed a 50-day war against them this summer.