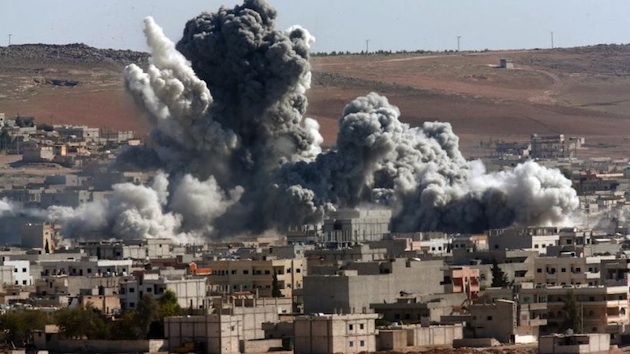 Oct. 22, 2014: Thick smoke from an airstrike by the US-led coalition rises in Kobani, Syria, as seen from a hilltop on the outskirts of Suruc, at the Turkey-Syria border. Kobani, also known as Ayn Arab, and its surrounding areas, has been under assault by extremists of the Islamic State group since mid-September and is being defended by Kurdish fighters. (Photo: AP)

In a massive offensive, Islamic State fighters have re-taken territory west of the city of Kobani where the U.S. dropped arms and other supplies to Kurdish forces Monday. ISIS has advanced toward the center of the city on three different fronts in Kobani, pushing back Kurdish defenders and leaving little territory around the city that the Kurds still control.

Now, according to Pentagon officials, any attempt to supply arms and supplies in the future will be extremely difficult, as it runs the risk of allowing arms and ammunition to fall into Islamic State hands. Turkish President Tayyip Erdogan announced Thursday that an addition unit of 200 Kurdish Peshmerga forces from Iraq arrive shortly in Kobani to help in the fight against ISIS, but the Pentagon worries the move is too little and came way too late.

Further, as of now, there is no word on when the troops will even arrive. The Turkish leader said they are bringing heavy weaponry and artillery, which has been repeatedly requested by the Kurds, but ignored by Washington.

“The fighting has been ongoing since last night on the eastern and southern fronts. It is some of the longest clashes in Kobani,” Kurdish activist Farhad Shami said speaking on the telephone from the town. “The fighting usually only takes place at night.”

Shami added that Kurdish fighters were forced to retreat from the Tel Shair hill that overlooks parts of Kobani.

“Combined with continued resistance to ISIL on the ground, indications are that these strikes have slowed ISIL advances into the city, killed hundreds of their fighters and destroyed or damaged scores of pieces of ISIL combat equipment and fighting positions,” Central Command said in a statement.

The Britain-based Syrian Observatory for Human Rights, which relies on a network of activists on the ground, reported that 553 people have been killed since the airstrikes began on Sept. 23. The group said it has documented the deaths of 464 fighters with the Islamic State group, adding that the real number could be much higher. However, they were quick to note that the death toll was partly made up of 32 civilians, including six children and five women.

Meanwhile, 57 fighters with the al-Qaeda affiliate, al-Nusra Front, were killed in airstrikes on the northern province of Aleppo and Idlib, the Observatory said.

ISIS has every military incentive to advance. As four coalition airstrikes on oil wells attempt to disrupt the money flow, the lack of sufficient ground troops and western will to fight a ground war has opened a door. Even though Pentagon officials point to strikes in the Jafra field in the eastern Syrian province of Deir el-Zour late Wednesday, the attacks barely disrupt the terror army’s finance infrastructure.

David Cohen, the man who leads the Treasury Department’s major effort to disrupt the Islamic State’s money supply, the terrorists are amassing a fortune through their web of criminal activity, including earning roughly $1 million a day from oil smuggling alone.

From the details in his report, the U.S.-led pinprick airstrikes on an oil field here or there is not a sufficient strategy to achieve such as goal. Cohen characterized the organization as having a stream of financing capable of taking such small setbacks.

“It has amassed wealth at an unprecedented pace,” Cohen said.

According to the report, ISIS is earning millions from a combination of oil sales, ransoms and extortion schemes. Kidnappings and ransom payments, alone, have brought in at least $20 million this year, while extortion and other criminal activities outside of black-market oil are raking in several million per month.

“A grocery store owner who refused to pay was warned with a bomb outside his shop. Others, who have not paid, have seen their relatives kidnapped. … We’ve also seen reports that when customers make cash withdrawals from local banks where ISIL operates, ISIL has demanded as much as 10 percent of the value,” Cohen said, using an anti-colonialism acronym for the group many say gives them credibility.

“They rob banks. They lay waste to thousands of years of civilization in Iraq and Syria by looting and selling antiquities,” he said. “They steal livestock and crops from farmers. And despicably, they sell abducted girls and women as sex slaves.”

Cohen stressed the revenues from oil, but provided staggering estimates exceeding $1 million per day, suggesting a far greater ISIS supply than coalition airstrikes appear serious enough to disrupt. Cohen also said we the group moves oil in within their network that exists outside the economy, yet we aren’t doing what we could be to truly and effectively combat the operation.

“But at some point, that oil is acquired by someone who operates in the legitimate economy and who makes use of the financial system. He has a bank account. His business may be financed, his trucks may be insured, his facilities may be licensed,” he said.

“We not only can cut them off from the U.S. financial system and freeze their assets, but we can also make it very difficult for them to find a bank anywhere that will touch their money or process their transactions.”