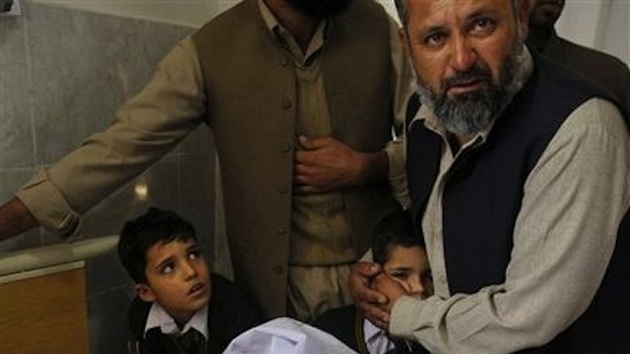 A Pakistani man comforts a student standing at the bedside of a boy who was injured in a Taliban attack on a school, at a local hospital in Peshawar, Pakistan, Tuesday, Dec. 16, 2014. Taliban gunmen stormed a military-run school in the northwestern Pakistani city of Peshawar on Tuesday, killing and wounding scores, officials said, in the worst attack to hit the country in over a year.(AP Photo/Mohammad Sajjad)

PESHAWAR, Pakistan (AP) — In the worst terror attack to hit Pakistani in recent years, Taliban Islamic extremists attacked an army school in the northwestern Pakistani city of Peshawar Tuesday, killing 126 people. Of those dead, the overwhelming majority were between the ages of 12- to 16-years-old, or students grade 1 – 10.

“My son was in uniform in the morning. He is in a casket now,” one parent, Tahir Ali, told The Associated Press as he came to the hospital to collect the body of his 14-year-old son Abdullah. “My son was my dream. My dream has been killed.”

Pakistani Prime Minister Nawaz Sharif condemned the assault in the northwestern city of Peshawar and rushed to the area to show his support for the victims.

The attack was carried out by roughly a dozen members of the Tehreek-e-Taliban group, which is a Pakistani Islamic militant group seeking to overthrow the government. In addition to those dead, dozens of wounded are flooding into local hospitals, while parents fearing the worst search for their children.

Police Officer Javed Khan said the attack began in the early morning and that Army commandos responded quickly arrived to the scene, exchanging fire with the radical Islamic militants. The exchange is ongoing, and it is unclear how many children or staff may still be in the facility.

The Pakistani military spokesman, Asim Bajwal, said on Twitter that five militants had been killed and that security forces had rescued two children and two staff members.

Bajwal gave another update roughly an hour later, claiming they had rescued 2 more children, 2 teachers, and killed a sixth terrorist in the final building to be cleared.

In their final sweep, they found 7 more male staff members and 4 female teachers, who were quickly escorted out by the Pakistani Army commandos.

Pervez Khattak, the chief minister of information for Peshawar, which has been the frequent target of Islamic militant attacks in the past, confirmed the death toll and said at least one of the fatalities was a teacher and one security official. Taliban spokesman Mohammed Khurasani claimed responsibility for the attack in a phone call to media, claiming that six suicide bombers had carried out the attack in revenge for the killings of Taliban members at the hands of Pakistani authorities. However, the chief minister said there were eight attackers, dressed in military uniforms.

In response to the past violence, the Pakistani military launched a major military operation in the North Waziristan tribal region back in June, seeking out all Islamic militant groups operating in the area. Officials feared a backlash by militants, but until Tuesday there had been no response.

The prime minister vowed that the country would not be cowed by the violence and that the military would continue with the aggressive operation.

“The fight will continue. No one should have any doubt about it,” Sharif said.