HomeNewsWorldFather Of Captured Jordanian Pilot Pleads With ISIS For Release

Father Of Captured Jordanian Pilot Pleads With ISIS For Release 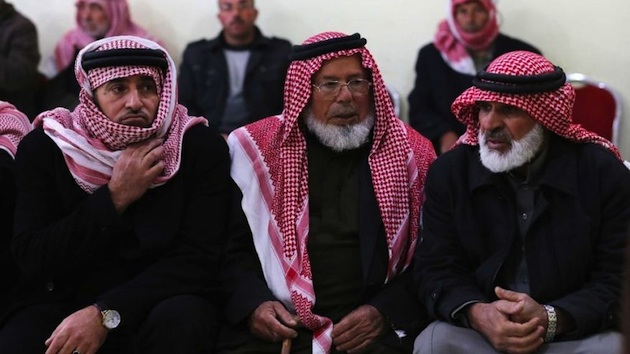 Dec. 24, 2014: Friends and relatives of Mu’ath Safi al-Kaseasbeh, a Jordanian pilot captured by the Islamic State group, gather in the town of Aey near Al Karak in southern Jordan. (Photo: AP)

AMMAN, Jordan –  The father of a Jordanian pilot captured by the Islamic State group in Syria pleaded for his son’s release on Thursday, though the group’s track record offers little comfort to the family.

The father reminded the Islamic militants holding his son that they share the same faith, but there has been silence from the group in return. 1st Lt. Mu’ath al-Kaseasbeh was carrying out air strikes against the militants when his warplane crashed near the northern Syrian city of Raqqasince, which is considered the group’s capital. ISIS militants quickly took him from the crash site Wednesday morning, dragging him to an undisclosed location.

According to photos published by the Raqqa Media Center, which operates in areas under IS control, al-Kaseasbeh appeared to be able to walk and the only visible injury was what is believed to be a bloody mouth.

The pilot’s father, Safi Yousef al-Kaseasbeh, made his plea while speaking to journalists in the Jordanian capital, Amman.

“I direct a message to our generous brothers of the Islamic State in Syria: to host my son, the pilot Mu’ath, with generous hospitality,” he said. “I ask God that their hearts are gathered together with love, and that he is returned to his family, wife and mother.”

“We are all Muslims,” he added.

The pilot is the first known military member of the international coalition — which includes the Arab nations of Saudi Arabia, Jordan, Bahrain and the United Arab Emirates — to be captured by the Islamic State. Qatar, a corrupt nation that in many ways is friendly to radical Islam, is providing logistical support only.

The cause of the crash was not immediately known.