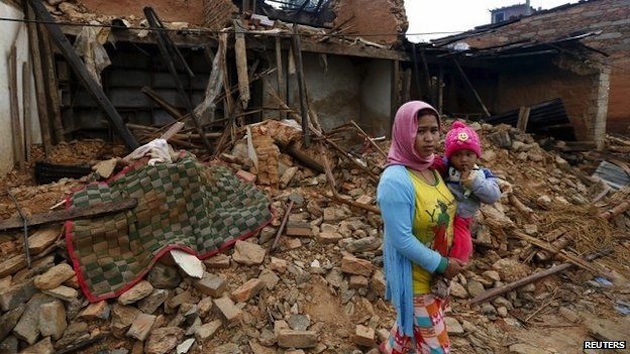 A woman in Nepal with her child surveys the rubble left over from the Nepal earthquake. (Photo: REUTERS)

The death toll from the 7.9-magnitude Nepal earthquake that struck Saturday passed 6,200 on Friday, as UN officials say more than eight million people have been impacted.

Some 600,000 houses have been destroyed, and aid workers are struggling to recover the bodies of the dead and assess the levels of damage.

Government officials have begun ordering immediate cremations to deal with the overwhelming number of corpses.

“Morgues are full beyond capacity and we have been given instruction to incinerate bodies immediately after they are pulled out,” said Raman Lal, an Indian paramilitary official working with Nepali forces.

Following an international outcry criticizing response times, aide is slowly beginning to reach the more remote areas that were devastated by the earthquake. The UN estimates that some 2 million will need tents, water, food, and medicine in the next three months.

Government officials estimate that Nepal will need at least $2 billion in aid to rebuild homes, hospitals, government offices, and historic buildings. The government has also pledged to provide $1,000 in assistance to the families of those who died, and another $400 for cremation or burial. But Nepalis are increasingly accusing the government of being too slow to distribute international aid, particularly to harder-to-access areas.