HomeNewsWorldISIS Leader Al-Baghdadi Audio: ‘Islam Is A Religion Of War’

ISIS Leader Al-Baghdadi Audio: ‘Islam Is A Religion Of War’ 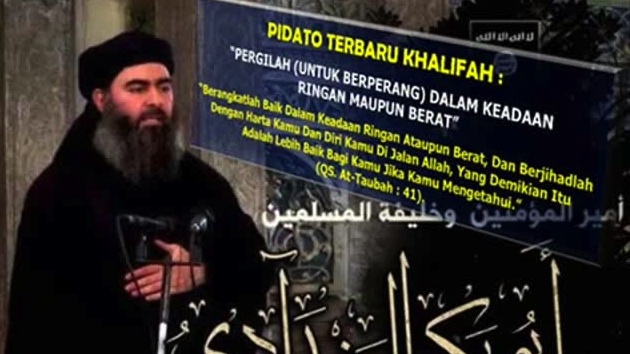 The Islamic State (ISIS) released an audio recording Thursday of leader Abu Bakr al-Baghdadi, who called on supporters around the world to join the fight, whether in Syria and Iraq or to take up arms in wherever nation they may live in.

However, that’s about as much that has been covered in the mainstream media, as the rest of al-Baghdadi’s message has largely been ignored for obvious reasons.

“Islam is a religion of war,” the ISIS leader purportedly says in the audio. “There is no excuse for any Muslim not to migrate to the Islamic State… Joining (the fight) is a duty of every Muslim. We are calling on you to either join or carry weapons (to fight) wherever you are.”

While PPD could not independently verify the authenticity of the audio or its date, it was published by the group’s al-Furqan media outlet and posted on several known jihadi websites. The title of the audio — “Go Forth, Whether Light Or Heavy” — is directly referenced by the Qur’anic verse 9:41. The Islamic State publishers even listed the passage in full:

Go forth, whether light or heavy, and strive with your wealth and your lives in the cause of Allah. That is better for you, if you only knew.

The new ISIS audio, if verified, will serve as a proof of life and would be al-Baghdadi’s first message since a number of media reports said he was wounded this year in a U.S.-led coalition airstrike in Iraq. Because he speaks only generally about current events and the fact they chose to use an audio rather than a video, indications are that he is cut off from outside events to at least some degree.

Sources in the Pentagon, who never confirmed al-Baghdadi’s psychical condition, tell PPD they at least hoped he no longer ran the group and was perhaps paralyzed. There was no credible argument to be made that he had died as some reports suggested, according to sources. Though the group has faced military setbacks in Iraq after Iranian Shiite militias filled the void left by the U.S., including retaking the city of Tikrit in the first big counter-offensive since the Islamic State began to rapidly seize large swathes of territory last year.

However, the Islamic State has regrouped and relaunched a massive offensive in Iraq, reaching the center of Ramadi early Friday and raising its trademark black flag over the provincial government building. The ISIS offensive, which started Thursday night and continued into Friday, included suicide attacks with explosive-rigged cars near security check points in Ramadi, the capital of Anbar province, according to Anbar Gov. Suhaib Al-Rawi.

Ramadi, which is the middle of the Sunni heartland in Iraq, is just 70 miles (113 kilometers) west of Baghdad. ISIS captured the city’s police headquarters building and the Ramadi Great Mosque after pushing Iraqi special forces from the area.