HomeNewsWorldRussia Gearing Up for ground Offensive in Northern Syria

Russia Gearing Up for ground Offensive in Northern Syria 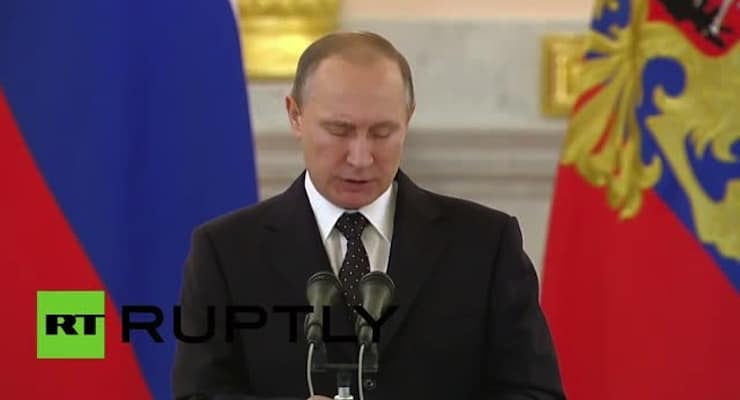 Russian President Vladimir Putin responds to the downing of a Russian fighter jet by Turkey in Syria, and blames “a number” of nations for fostering ISIS.

As the Obama administration crows about a ceasefire achieved in Syria in conjunction with Russia and the Assad regime, it becomes clear once again that this administration is in over its head against Vladimir Putin. In a move similar to the constant escalation and deescalation the world has seen in East Ukraine, Russia, Iran and Syrian government forces are once again massing troops and artillery in Northern Syria, preparing for a new assault on the anti-Assad opposition.

There is disagreement in the American leadership as to the seriousness of Russian intentions regarding the halt in the fighting, and to the level of control Moscow has over the Assad government. The Kremlin is famously unpredictable in these matters and the Syrian conflict is obviously no different.

The collapse of the ceasefire prompted President Obama to call the Russian leader yesterday. Josh Earnest, the White House press secretary, used unusually blunt language in describing the exchange between the two leaders, calling it an “intense conversation,” reported the Wall Street Journal.

“About two weeks ago, U.S. intelligence agencies began to detect the redeployment of artillery units to areas near the northern city of Aleppo, the opposition stronghold, and inside Latakia province, near where government forces have been gathering,” according to a senior U.S. defense official.

The Journal reports that administration officials are now drawing up plans to provide anti-artillery and anti-aircraft weapons to the “moderate” Syrian rebels. This should end well.