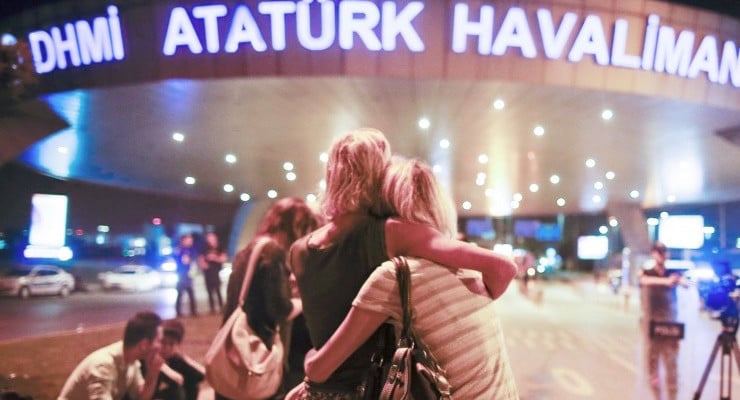 Turkish officials claim to have “strong evidence” that the terrorists behind the Istanbul airport attack came to the country from the Islamic State (ISIS) stronghold of Raqqa, Syria. Multiple sources claim that the group’s leadership, including a Chechen terrorist responsible for training Russian-speaking militants for ISIS, was involved in the planning of the attack that killed at least 43 and wounded an estimated 230 more.

Turkish government officials publicly announced Thursday they arrested 22 people in connection with the terrorist attack on the Istanbul airport. An official told PPD that “the attackers behind Tuesday’s shootings and suicide bombings were from Russia, Uzbekistan, and Kyrgyzstan.” Akhmed Chatayev was identified on a U.N. sanctions list as an ISIS leader and was wanted by Russian authorities. Chatayev had been wanted for links to terrorism since 2008.

Still, the nationality of the attackers does not disprove Turkish officials’ claims. Former Soviet satellite states, particularly Chechnya and Uzbekistan, have produced some of the most dangerous and well-trained battalions in the ISIS army, one of which is called the Uzbek battalion.

Sources told PPD that the attackers rented an apartment in the Fatih district of Istanbul and one of them left his passport behind before the attack. They said the evidence shows the attackers entered Turkey roughly a month ago from Raqqa, though strangely claimed they did so with the suicide vests and bombs used in the Istanbul airport attack.

ISIS previously jumped to claim responsibility for the attacks like the one that killed 49 people at a gay nightclub in Orlando, which was out of character for the group. That raises the question as to why has the group stayed silent on the attack in Istanbul? By avoiding any claim of responsibility, ISIS forces Ankara to consider the possibility that its longtime Kurdish adversaries are responsible.

That could lead to Turkey’s ramping up its military campaign against the Kurds who are fighting — and making gains against — the Islamic State in northern Syria. The Islamic State seeks to exploit this fissure between Kurds and Turks to advance its agenda, said a U.S. official, who spoke on condition of anonymity.

President Recep Tayyip Erdogan said in a statement following the terror attack that it “will not divide or split our country,” adding the attackers committing the act proved they are not really Muslims by conducting it during the final days of the holy month of Ramadan shows the terrorists had no regard for faith or values.

“This is not Islamic. Taking one person’s life means going straight to hell,” he added. “No terrorist organization will come between what we are.”

However, the truth is that Turkey, a NATO member and once staunch ally in the War on Terror, has moved markedly toward Islamic supremacy in recent years. Following the Paris terror attacks, Turkish citizens attending a soccer game booed during a moment of silence for the victims, following up their boos with shouts of “Allah Akbar.”

Meanwhile, Central Intelligence Agency (CIA) Director John Brennan said the attack in Istanbul “certainly bears the hallmarks of ISIL’s depravity.” However, he would “be surprised if Daesh is not trying to carry out that kind of attack in the United States,” using an alternate name for ISIS commonly and tellingly used by members of the Obama administration.