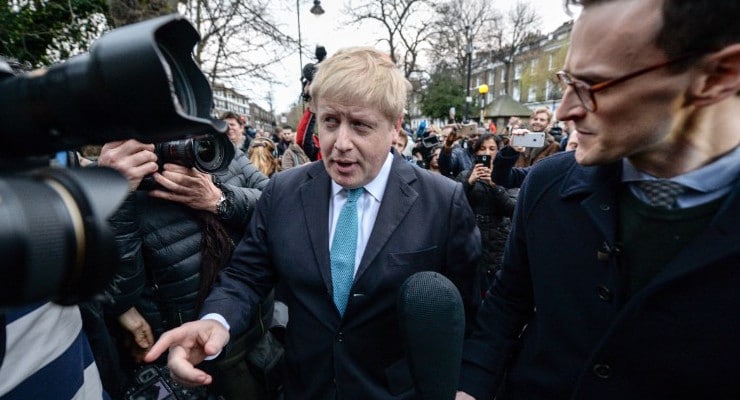 Boris Johnson, the former London mayor and leader of the successful Leave campaign (Brexit) in the United Kingdom, has decided not to run for prime minister. Mr. Johnson removed himself from the running for the prime ministership Thursday, the top position in the Conservative party.

The contest was sparked after Prime Minister David Cameron, an opponent of Brexit, announced he would resign following the UK European Union referendum result. Despite the polls, the British people voted 52% to 48% to leave the EU.

“Having consulted colleagues and in view of the circumstances in parliament, I have concluded that person cannot be me,” Johnson said, speaking from a London hotel. “My role will be to give every possible support to the next Conservative administration to make sure that we properly fulfil the mandate of the people that was delivered at the referendum and to champion the agenda that I believe in, to stick up for the forgotten people of this country.”

The decision leaves Energy Minister Andrea Leadsom and former Defense Secretary Liam Fox–who campaigned to leave the EU–and Work and Pensions Secretary Stephen Crabb, who was for the Remain side. Nigel Farage, the leader of the UKIP and long-standing leader of the Brexit movement, obviously is not in the race.

Here’s the full list of candidates below, via the BBC:

Home Secretary Theresa May: The 59-year-old is the bookies’ favourite to win the contest. She’s held the Home Office brief – often something of a poisoned chalice – since 2010, and is a former Tory party chairman. She says she can offer the “strong leadership” and unity the UK needs, and promised a “positive vision” for the country’s future. She backed staying in the EU.

Justice Secretary Michael Gove: The 48-year-old former newspaper columnist was a key figure in the party’s modernisation that led to its return to power in 2010. He was a reforming, if controversial, education secretary between 2010 and 2014, and now holds the Ministry of Justice brief. He was a leading player in the Brexit campaign – which put a strain on his close friendship with David Cameron. He has pitched himself as the candidate that can provide “unity and change.”

Work and Pensions Secretary Stephen Crabb: The 43-year-old was promoted to the cabinet in 2014 as Welsh secretary, and boosted his profile earlier this year when he took over as work and pensions secretary. A rising star of the Tory party he has promised to unite the party and country following the referendum result and provide stability. Raised on a council estate by a single mother, he has a back story to which many Tory MPs are attracted. Backed Remain.

Energy minister Andrea Leadsom: The 53-year-old former banker and fund manager was one of the stars of the Leave campaign. A former district councillor, she became MP for South Northamptonshire in 2010 and – after serving as a junior Treasury minister and as a member of the Treasury select committee – she was made a junior minister in the energy and climate change department in May last year.

Former cabinet minister Liam Fox: It’s second time around for the 54-year-old ex-defence secretary and GP, who came a close third in the 2005 leadership contest. His cabinet career was cut short in 2011 when he resigned following a lobbying row. A Brexit campaigner, and on the right of the party, he has said whoever becomes PM must accept “the instruction” of the British people and not “try to backslide” over EU membership.

Worth noting, Mr. Gove–who is painting himself as the candidate that will offer “unity and change” and helped deliver the Brexit result–was expected to back Mr. Johnson for the post. But he surprisingly said he decided concluded that “Boris cannot provide the leadership or build the team for the task ahead.”

Also worth noting, David Cameron, Boris Johnson, Michael Gove and George Osborne all grew up together–personally and politically–and their families were all very close. However, the EU referendum ripped some of those old loyalties, particularly when Mr. Johnson decided to back Brexit despite Prime Minister Cameron’s objections.