HomeOpinionLike A Good Soldier Eric Shinseki Resigns, But Will Veterans’ Deaths Be In Vain

Like A Good Soldier Eric Shinseki Resigns, But Will Veterans’ Deaths Be In Vain 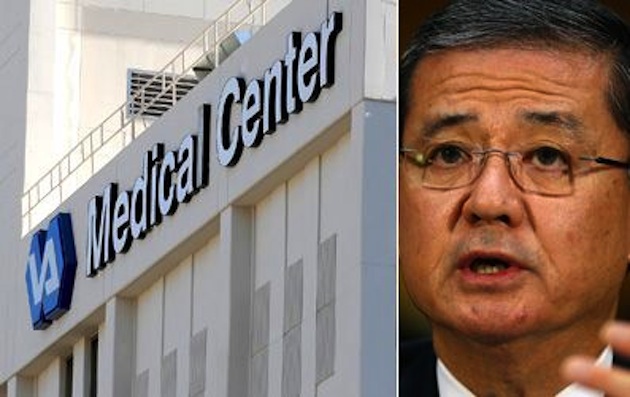 The president and Shinseki met at the White House after he received an update on an internal review of the problems at the VA. The review showed the problems were systemic, and not limited to just a few facilities. “It’s totally unacceptable. Our veterans deserve the best,” Obama said.

Earlier Friday morning, Shinseki publicly apologized for the failures in the VA system, and also announced he would oust senior leaders at the Phoenix VA Medical Center, where allegations of improper scheduling practices first surfaced. Shinseki, speaking to advocates for homeless veterans, said he initially believed the problems were “limited and isolated.”

“I no longer believe that. It is systemic,” Shinseki said. “I will not defend it, because it is indefensible.”

However, despite the pretend outrage at this failure of big government, which they are also pretending to have just discovered, the evidence shows both men and many others knew that the VA problems were systemic. Over a period of a decade, nearly two dozen reports from the agency’s inspector general and the Government Accountability Office found veterans were dying because of long wait times for health care, and that were covered up by bogus and corrupt record- keeping by bureaucrats at the Department of Veterans Affairs hospitals.

Democrats and the administration are hoping to calm the political storm, and that the media coverage will not focus on the real story behind the VA scandal, which is the innate failure and corrupt tendency of big government. Republicans do not seem willing to allow the resignation to sweep the scandal under the rug, but whether they even understand the depth of the problem is not yet clear.

“VA’s problems are deadly serious, and whomever the next secretary may be, they will receive no grace period from America’s veterans, American taxpayers and Congress,” Rep. Jeff Miller (R-FL), the chairman of the House Veterans Affairs Committee said in a statement.

House Speaker John Boehner said the resignation “does not absolve the president.” The House Speaker is leading the calls for the Justice Department to launch a criminal probe, and his delegation is behind him. “I think criminal convictions will come out of this,” said Rep. Jackie Walorski (R-IN), a member of the House veterans’ committee. “Somebody in that organization put a deliberate plan together of deceit and corruption and people died.”

But Democrats are not accepting the facts and the real problem at the heart of the VA. Shinseki said the “lack of integrity” is something he has “rarely encountered.” That’s just not a correct characterization of the VA bureaucracy, which is in fact systemically corrupt. Even the internal audit reviewed by Obama on Friday found that “pressures were placed on schedulers to utilize inappropriate practices in order to make Waiting Times appear more favorable.” Simply announcing that patient wait times will no longer be used as a measure of success in employee evaluations will not remove the corruption, because the bureaucracy itself is still corrupt.

Nevertheless, at the behest of the public labor unions, President Obama threatened to veto the House bill if the Senate had passed a version, claiming he agreed with the principle but not the policy. Meanwhile, Obama said Shinseki told him he did not want to be a distraction. “I agree,” Obama said. “We don’t have time for distractions. We need to fix the problem.”

Yet, the entire resignation and current calls for more investigations are all distractions from the real root of the problem, which strikes at the heart of the Democratic Party’s big government ideology. Sen. Barbara Mikulski (D-MD), and Sen. Richard Shelby (R-AL), said in a joint statement that they would continue to push a bill to commence a Justice Department investigation. “This scandal has dragged on over a decade. We believe the Department of Justice should begin investigations right away,” they said.

Even though people may be targeted for prosecution and internal reports may state the bureaucratic practices were “pervasive” enough to “require VA re-examine its entire Performance Management system,” the people will only evolve the practices into a new, unaccountable version of bureaucratic tyranny. In the mid-1930s, President Franklin D. Roosevelt, a progressive hero none-the-less, opposed efforts to unionize WPA workers. In his book Special Interest: Teachers Unions and America’s Public Schools, Terry Moe wrote that Roosevelt, “an ardent supporter of collective bargaining in the private sector, was opposed to it in the public sector.”

Roosevelt was wrong, but not in the way progressives had hoped he would be.

Roosevelt’s ideology, and in fact the entire progressive ideology, fails to accept the corrupt nature and natural expansion of government. With government, as another book attempted to remind the American people, you cannot have your cake and eat it too. The tyranny of many, as is the case with the modern American bureaucracy, is self-perpetuating and unaccountable. It bears little resemblance to the merit-based bureaucracy our founders had in mind and Max Weber admired in his seminal work about the early American republic.

Until we return to our true limited government instincts, these deaths will have been in vain.

Why ObamaCare Will Remain Unpopular Despite Fudged Enrollment Numbers

With Obama Scandals Piling Up, It's Time For The Left To Come To Grips