How Times Have Changed: Obama’s Malaysian Airlines Response Vs. Reagan In 1983 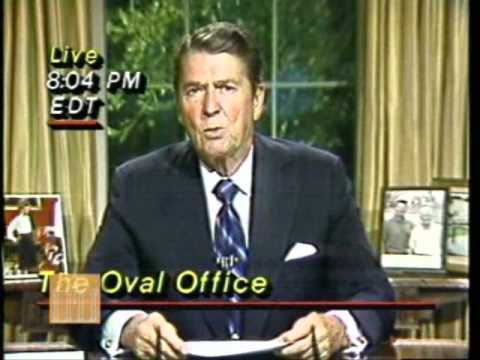 On September 01, 1983 the former Soviet Union committed an unthinkable act — it shot down a loaded passenger jet over contested territory in the Sea of Japan. It was a barbaric act perpetrated by an aggressive nation determined to send a message about its sovereignty to the world.

Yesterday, Malaysian Airlines MH17 was relegated to the same history as Korean Air Lines Flight 007, as it too was shot down for the same reasons and arguably by the same nation.

While there has been no official proof of the perpetrator of this action (listen to SBU intercepted tapes), there can be no doubt that whoever committed this dastardly act had sophisticated technology enough to bring the jet down and, more importantly, knew the civilian nature of their target.

At the time of KAL flight in 1983, Ronald Reagan immediately issued a statement about the Soviet Union, with George Schultz making a presentation of evidence within HOURS of the attack. Reagan addressed the nation (viewable below) 3 days later about the sequence of events of the shoot down. He presented concrete evidence of the Soviet Union’s actions as well as the accusations of a cover-up and interference with the investigation who denied the attack, much as they are today.

After presenting his case to the world with all the expertise of a prosecuting attorney, providing charts and intercepted communications, he called the act a “crime against humanity [that] must never be forgotten.” This was followed by civilian and military sanctions against the former Soviet Union that were severe and injurious to the nation. This was followed by a similar presentation to the UN General Assembly several days later.

Reagan’s actions galvanized the world against the former Soviet Union and have been credited by many as a contributing factor in the countries eventual breakup. He acted as a leader to unify the world against an “evil empire,” which for years had acted with disregard to human rights and safety, much as they do today.

President Obama also issued a statement about this country in regards to the Malaysian airline disaster, and probable shoot down by pro-Russian forces in Ukraine.

He said, and I quote:

“It looks like it may be a terrible tragedy.”

Then he told some jokes.

Obama also said the White House’s “first priority” would be determining whether any U.S. citizens were on board. A whole 40 seconds of mention. Meanwhile, Putin is actually blaming the West, saying that “This tragedy would not have happened if there were peace on this land, if the military actions had not been renewed in southeast Ukraine.”

Apparently, the 200 plus others that were murdered just didn’t matter to our President.

My, how times have changed.