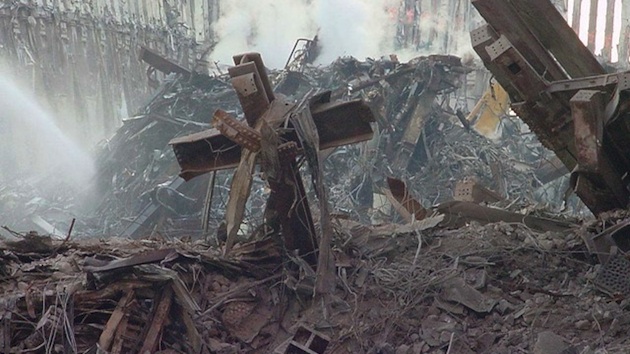 The World Trade Center cross, as it stood after the smoke and debris cleared enough to see it on September 11, 2001.

At the Democratic National Convention in 2012, in an effort to inspire and promote multiculturalism, the DNC invited members of some radical branches of Islam to attend a prayer service. SEE ARTICLE HERE. This comes just a few days before the 11th anniversary of 9/11 and after Mayor Bloomberg DENIED that request to have Christian services at Ground Zero last year. In remembrance of that day, last year I wrote this article about the importance of God and prayer both in our lives and at that event.

This is a reprint of that article. I’m proud to say this article was powerful enough to garner national attention and is about why the relationship between God and Man is central to the American way of life.

This week Mayor Bloomberg of New York City declared that there will be no prayer or liturgical representation at the 9/11 10th anniversary memorial service to be held at Ground Zero. Although the mayor has never allowed prayer or any sort of spiritual remembrance at any 9/11 service, he has come under substantial criticism this time around since it is the 10th anniversary of the attack.

There will be those who will suggest that in doing so he is keeping up with the tradition of the separation of church and state. Others will point to his de facto support of multiculturalism; and still again, more will simply defend him by stating that allowing prayer would be a complicated logistical problem since he would have to allow Muslim, Christian and other denominations all to have prayers as well. Keep in mind his predecessor, ‘America’s Mayor’ Rudy Giuliani was able to keep it nondenominational and was always able to find the time and place for prayer in 9/11 memorial services.

Instead of criticizing the mayor though, we should instead explain to him why he must allow prayer at the service and it goes back to what happened on that brisk September morning.

Shortly after the first plane crashed into the World Trade Center, first responders such as fireman and police rushed to the scene to save and rescue the people they were sworn to protect. Among those first responders was the NYC Fire Chaplain Father Mychal Judge, who met Mayor Giuliani at the scene. Upon arrival the mayor asked Father Judge for a prayer to get them through these difficult hours. Father Judge did so, and started administering last rites to the fallen in the streets below, and then entered the World Trade Center lobby to do the same to those that had fallen in the initial attack. The NYC Fire Department had brought the injured and dying to an emergency command post set up in the lobby of North Tower and upon arrival there, with no regard to his own safety, began to administer the last rites again to those in need.

As Father Judge was beginning to administer last rites to a dying woman who had fallen beside a dead firefighter, he removed his helmet to do so. At that point numerous people from the floors above had begun to jump to their deaths, burning and covered with jet fuel. They fell outside the lobby nearby. Overwhelmed by the horror of the spectacle and the sheer enormity of the attack, Judge cried out to God in a moment of pain and anguish—”Jesus, please end this right now! God, please end this!” repeatedly in prayer.

The building across the plaza, World Trade Center South, collapsed under the strain of the melted girders, and in doing so sent off massive shards of debris. One of the chunks of the building crashed into the lobby where Father Judge was and struck his now uncovered head in a single fatal blow, where he fell beside the woman he was administering last rites to.

The firefighters on the scene and a police lieutenant, who had been buried by the debris nearby, found the fallen priest and carried his body from the lobby. Beloved by the fire and police departments, he was labelled Victim 0001, the first body recovered that day.

In and of itself, the priest’s tragic and heroic death should be enough to convince Bloomberg of the importance of prayer and being part of the memorial of that fateful day.

And yet, there is more.

Before 9/11, Judge had been consoling the families of the dead of another tragedy—TWA flight 800, which was lost in the ocean with all aboard. He was meeting with them every day for three weeks after the tragedy and was working toward making a permanent memorial site for those lost. Most importantly, he made sure that every summer on the anniversary of that crash there was a memorial service for the families, one that included a prayer and liturgical offering. No one questioned the importance of it then, nor should Mayor Bloomberg question it now. This is not an issue of fairness or separation of church and state. He did not make those efforts in order to promote any personal choice of religion, but to provide comfort and assuage the pain of those suffering.

Prayer is not always about religion, it is instead often about relief and repose.

It is a matter of decency, and respect for those that lost families. Not just those that died that day, but for every man and woman who has died in service to this nation in the years since then who are fighting against the extremists and jihadists that sullied America on 9/11, as well as their own religion of Islam, which also has been much maligned since the attack. Religion is not the cause of such great horror in the world—it is the perversion of that religion, twisted and evil. Thus by including a liturgical or prayer in the 9/11 anniversary service you are telling the world that God and religion are a center of succor and healing and it is a source of strength and comfort, not one of pain and suffering. By hiding away the fact that religion is part of many people’s lives and the fountain of heroism like in Father Judge (and many others like him) you are devaluing the memory of what he stood for — goodness and a beacon of light in a world of darkness.

The recognition of separation of church and state means that America is tolerant of all religions and denominations not that we are a godless society.

Father Judge certainly believed in that. He even died for it.

God was listening that day; why can’t we?

More of Thomas Purcell’s work can be read at libertyneversleeps.com and is host of the Liberty Never Sleeps Show on IHeartRadio

Mr. President, Your Plan Won't Defeat ISIS 'Wherever They Exist,' Or Anywhere

Backed Into A War