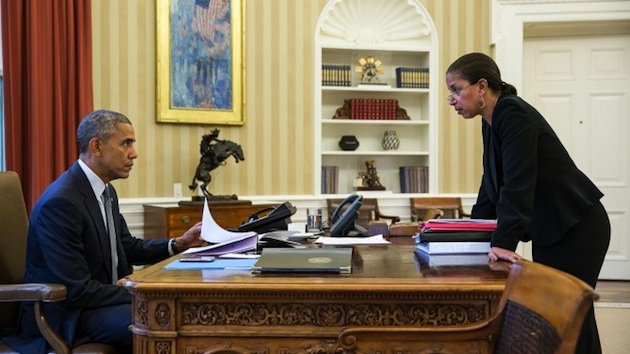 When Alfred E. Neuman said “What me worry?” on the cover of Mad magazine, it was funny. But this message was not nearly as funny coming from President Barack Obama and his National Security Advisor, Susan Rice.

In a musical comedy, it would be hilarious to have the president send out his “happy talk” message by someone whose credibility was already thoroughly discredited by her serial lies on television about the Benghazi terrorist attack in 2012.

Unfortunately — indeed, tragically — the world today is about as far from a musical comedy as you can get, with terrorists rampaging across the Middle East, leaving a trail of unspeakable atrocities in their wake, and with Iran moving closer to producing a nuclear bomb, with an intercontinental missile on the horizon.

We will be lucky to get through the remainder of President Obama’s term in office without a major catastrophe, from which we may or may not recover.

Iran has announced repeatedly that it plans to wipe Israel off the face of the earth. But you don’t need an intercontinental missile to reach Israel from Iran. Teheran is less than a thousand miles from Jerusalem. As was said long ago, “Send not to know for whom the bell tolls. It tolls for thee.”

It was painfully ironic to hear Ms. Rice tell us that the danger we face today is not as serious as the dangers we faced in World War II.

Anyone who has actually studied the period that led up to World War II knows that the Western democracies followed feckless policies remarkably similar to those that we are following today. And anyone who studies that war itself knows that the West came dangerously close to losing it before finally getting their act together and turning things around.

In a nuclear age, we may not have time to let reality finally sink in on our leaders and wake up the public to the dangers.

There was lots of “happy talk” in the West while Hitler was building up his Nazi war machine during the 1930s, as the Western intelligentsia were urging the democracies to disarm.
The dangers of Hitler’s sudden rise to power in Germany during the early 1930s were played down, and even ridiculed, by politicians, journalists and the intelligentsia in both Britain and France.

A temporary political setback for the Nazis in 1933 was hailed by a French newspaper as “the piteous end of Hitlerism” and a British newspaper said even earlier that Hitler was “done for.” Prominent British intellectual Harold Laski opined that Hitler was “a cheap conspirator rather than an inspired revolutionary, the creature of circumstances rather than the maker of destiny.”

In other words, Hitler and the Nazis were the “junior varsity” of their day, in the eyes of the know-it-alls.

Even after Hitler consolidated his political power in Germany, imposed a dictatorship and began building up a massive war machine, the Western democracies continued to believe that they could reach a peaceful understanding with him.

There was euphoria in the West when British Prime Minister Neville Chamberlain returned from a conference in Munich, waving an agreement signed by Hitler, and declaring that it meant “peace for our time.” Our time turned out to be less than one year before the biggest and most ghastly war in history broke out in 1939.

Today, when people can graduate from even our most prestigious colleges and universities utterly ignorant of history, many people — even in high places — have no idea how close the Western democracies came to losing World War II.

For the first three years of that war, the West lost battle after battle in both Europe and Asia. France collapsed and surrendered after just six weeks of fighting, and few expected the British to survive the blitzkrieg Hitler unleashed on them from the air. Americans were defeated by the Japanese in the Philippines and, as prisoners of war, faced the horrors of the infamous Bataan death march.

When the British finally won the battle of El Alamein in North Africa in November 1942, this was their first victory, more than three years after Britain entered the war.

A nuclear war is not likely to last three years, so there is unlikely to be time enough to recover from years of glib, foolish words and catastrophic decisions.