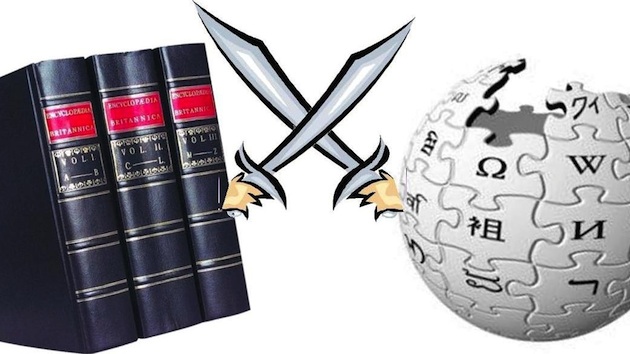 For years, people assumed encyclopedias had to be created by professionals. Then Wikipedia founder Jimmy Wales attempted to create an encyclopedia without central planners.

That sounded like a terrible idea to the old gatekeepers — people who hired experts to carefully fact-check and edit every encyclopedia entry. When they heard that Wales would crowdsource an encyclopedia, one Encyclopedia Britannica editor sneered, “The user who visits Wikipedia is a visitor to a public restroom.”

When I say Wikipedia is crowdsourced, I mean that millions of readers edit the entries. Their power to correct things is weighted according to the reputation they acquire from the “crowd.” Without being paid, this army of amateurs takes pride of ownership. They work hard to keep their entries accurate.

After model/actress Anna Nicole Smith died, someone changed her Wikipedia entry to something vulgar. It was fixed within minutes.

The amateur editors specialize, says Wales. “There is a group of people who say, look, we’ve got all these entries about bridges, we want to make sure they’re all really good, because we love bridges; we’re bridge fanatics. I mean, who knew bridge fanatics exist?”

But they do. So do fanatics who want to get things right about Roman history, bacteria, spy novels and so on.

That this could be accurate without strict central planning is hard to grasp. Even Wales started out thinking that some kind of planner was necessary. He hired a Ph.D. in philosophy to edit a more centralized online encyclopedia, Newpedia. It failed.

Many of today’s most popular websites — Google, Indiegogo, Facebook — thrive because they gave more control to users than to the founders. They also help users get things done without relying on gatekeepers at publishing houses, mainstream media or colleges.

Mike’s wife then told him he should build the road. Although he had no road-building experience, he agreed to try. He went to the local pub and persuaded a farmer to let part of his land be used for the project.

Government said it would take a year to rebuild the road. On TV one bureaucrat said, “you can’t just do what you want … (Everything must) conform to highway standards!”
But Mike built his “private road” in just 12 days. He paid for it by collecting a $3 toll. Drivers cheerfully paid because Mike’s road saved them so much time. (British private toll roads like this are where we got the word “turnpike.” Private tollbooth operators would lift a “pike” to let the horses through.)

After Mike started giving interviews about the success of his road, the local government got embarrassed and quickly finished work on its road. Mike had to shut down. He at least managed to break even.

Both he and Wikipedia are reminders that human beings can still do great things, big and small, when they stop waiting for permission from above.