HomeOpinionFreedom Of And From Religion

Freedom Of And From Religion 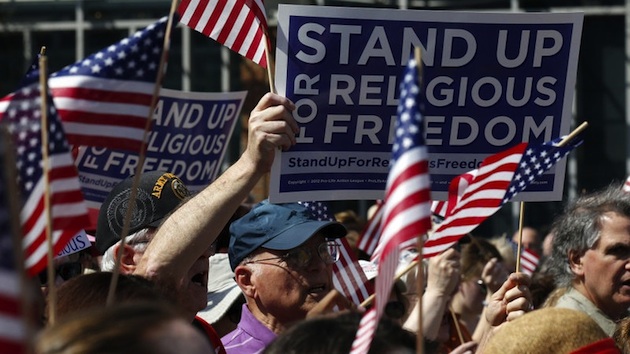 Protesters rally for religious freedom in front of Philadelphia’s Independence Hall on Friday. Rallies took place nationwide to protest the mandate that some religious organizations cover the cost of contraception on March 23, 2015. (Photo: Alex Brandon/AP)

Religious oppression was one reason many of our ancestors came to America. They wanted to escape rulers who demanded that everyone worship their way. In Ireland, Catholics couldn’t vote or own a gun.

I assumed that because many of America’s founders came here to escape such repression, they were eager to allow religious freedom in America. After all, the very First Amendment in the Bill of Rights says, “Congress shall make no law respecting an establishment of religion.”

But I was wrong. On my TV show this week, Chapman University economist Larry Iannaccone explains that many American settlers were just as tyrannical about insisting that everyone follow their  religion: “In the Northeast, it was Puritanism or Calvinism. In New York and Virginia, Anglicanism, the Church of England. Elsewhere, it was Catholicism.”

Only when colonists tried to form a nation, and met with others who practiced different religions (or none, like Thomas Jefferson), did they put freedom of religion in the Bill of Rights.
So what does that mean today? President Obama tells religious people that he supports “the right to practice our faith how we choose.”

But ObamaCare functionaries ordered Christian groups to fund employees’ purchase of birth control and the morning-after abortion pill. Some religious people believe both pills are a form of murder. Would their president force them to pay for what they consider murder? You betcha.

The Green family, which owns Hobby Lobby, sued, and the Supremes ruled that some faith-based corporations can get an exemption from Obamacare. But it was a pathetically narrow victory, applying only to small, privately-held companies, and they still must hire lawyers to beg for an exemption. Non-profits and bigger groups such as Notre Dame still must fund what they consider to be murder.

Leftists still assailed the court for granting even this tiny exemption. Sen. Elizabeth Warren said she “can’t believe we live in a world where we’d even consider letting big corps deny women access to basic care.”

Harry Reid said, “If the Supreme Court will not protect women’s access to health care, then Democrats will.”

What utter nonsense! No one was “denied access” to anything. Anyone with a prescription can buy birth control pills at Wal-Mart for $9. Are leftists so in love with big government that they think government not funding something is akin to banning it? Apparently they do.

Hobby Lobby’s owners were represented in court by a group called the Becket Fund for Religious Liberty. Becket’s director, Kristina Arriaga, says Hobby Lobby isn’t stingy or cruel: “The Green family pays twice the minimum wage, closes on Sundays, gives very generous benefits to their employees, and they did not object to 16 out of the 20 drugs (for which coverage was mandated).”

I say it shouldn’t matter whether the Green family is good to its employees. No one is forced to work for them or any company. If business owners don’t want to fund birth control, alcohol rehab, haircuts or anything, that should be their right.

They created the company (or paid to buy it), and as long as they don’t collude with competitors, they should be allowed to impose whatever rules they want. Employees aren’t trapped. Anyone can quit. Companies that give more generous benefits will attract better employees. That competition protects workers better than government mandates ever will.

Letting government make so many one-size-fits-all decisions creates new problems. Iannaccone argues that religion is more vibrant in the U.S. because the American government has mostly left religion alone. In Europe, governments subsidized religion or set the rules. The state promised protection for all but ended up becoming an enforcer of orthodoxy. That made religion more homogeneous and less appealing. Forty percent of Americans say they go to church every week. In England and France, only 10 percent do. In Denmark, only 3 percent attend.

“Religion is a market phenomenon like other ones,” Iannaccone says, “and when you make the government the arbiter, the funder, (religion) operates like a typical lazy monopoly. Incentives are lost. The clergy get focused on pleasing politicians rather than the people.”

Government ought to leave us alone so we can do as we please, in collaboration with whatever God we believe in.