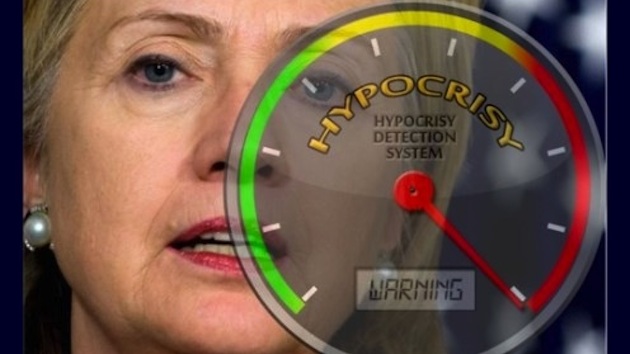 It must be fun to be a leftist. You get to spend other people’s money. But that’s just for starters. Using the power of majoritarianism, you also get to tell the rest of the country what to do, how to behave, and even what to eat.

Best of all, you can be a complete hypocrite. Even if you’re in the public eye, like Hillary Clinton, that’s apparently no obstacle to behaving in one way and then insisting that the rest of us do the opposite.

And it’s definitely true if you’re part of the statist chattering class.

Jillian Kay Melchoir of National Review reveals that the pro-tax crowd at MSNBC must think they’re working at the OECD.

How else to explain that so many of them have unpaid tax bills?

Touré Neblett, co-host of MSNBC’s The Cycle, owes more than $59,000 in taxes, according to public records reviewed by National Review. In September 2013, New York issued a state tax warrant to Neblett and his wife, Rita Nakouzi, for $46,862.68. Six months later, the state issued an additional warrant to the couple for $12,849.87. …MSNBC’s hosts and guests regularly call for higher taxes on the rich, condemning wealthy individuals and corporations who don’t pay their taxes or make use of loopholes. But recent reports, as well as records reviewed by National Review, show that at least four high-profile MSNBC on-air personalities have tax liens or warrants filed against them.

And why is this hypocritical?

Because, as illustrated by this video from Washington Free Beacon, so many of them urge higher taxes on the rest of us and argue that paying taxes is a wonderful experience.

I guess the MSNBC hosts forget to mention that higher taxes are only good for other people, not for themselves.

Now let’s look at another example.

Though I confess I’m merely assuming hypocrisy in this case. It deals with actors, the vast majority of which almost surely would want to impose a higher minimum wage on, say, the fast-food industry.

But, writing for Investor’s Business Daily, Larry Elder points out that these actors in Los Angeles don’t want to be covered by the minimum wage because they understand it means less work for themselves.

In Los Angeles County, the minimum wage is $9 per hour. Theater actors, however, can be paid as little as $7 a performance, and an actor can even work long rehearsal hours with no pay. Three decades ago, L.A. County actors sued their union for an exception to union wages for theaters with 99 seats or fewer seats. Why do these stage actors work for so little? They want to work. By working, they improve their skills, stay sharp and or perhaps have a chance to get spotted by an agent. Some say simply having something to do is better than just sitting around and waiting for a casting agent to call. Actors Equity, the national union, wants to change this. …But then a very Republican thing happened — 66% of the union members voted against a higher minimum wage. Their rationale was simple: A higher minimum wage means fewer plays get performed. Fewer plays mean fewer opportunities for actors and therefore fewer opportunities to gain experience, stay in practice or get discovered. …When it comes to their own lives, these actors understand the law of economics: Artificially raise the cost of a good — in this case the price of an actor in a stage play — and you reduce the demand for actors.

Unfortunately, this episode of economic enlightenment doesn’t have a happy ending.

But the union’s national council ignored this advisory vote and ordered, with some exceptions, a $9 per hour minimum wage.

Kudos to Mr. Sajak. Too bad there are so many politicians (including many Republicans) who don’t understand that higher minimum wages mean fewer jobs for the less vulnerable.

Though, to be fair, maybe supporters do understand the harsh impact and simply don’t care.

P.S. I wrote yesterday about the impact of tax reform on the 2016 election, and I included a postscript about a healthcare issue that has resonance with voters.

Well, Philip Klein of the Washington Examiner makes the case for another healthcare issue that he hopes will motivate Republican primary voters to reject Ohio Governor John Kasich.

…not only did Kasich decide to participate in Obamacare’s fiscally destructive expansion of Medicaid, in doing so he also displayed a toxic mix of cronyism, dishonesty and executive overreach. …despite campaigning on opposition to Obamacare, Kasich crumbled under pressure from hospital lobbyists who supported the measure, and endorsed the expansion. When his legislature opposed him, Kasich bypassed lawmakers and imposed the expansion through a separate panel — an example of executive overreach worthy of Obama. Kasich cloaked his cynical move in the language of Christianity, and, just like a liberal demagogue, he portrayed those with principled objections to spending more taxpayer money on a failing program as being heartless. …Republican voters made a terrible miscalculation when they chose so-called compassionate conservative George W. Bush as their nominee, as he went on as president to push the largest expansion of entitlements since the Great Society in the form of the Medicare prescription drug plan. …During this presidential primary season, Republican voters will have much better options than they did last time. They don’t have to settle for another champion of big government. By punishing Kasich for expanding Medicaid, conservative primary voters would be sending the message to state-level Republicans everywhere that if they choose to advance big government healthcare solutions, there will be consequences — and they will have no chance of rising to higher office.

It’s not my role to comment on which candidates deserve support, but I definitely agree that Kasich’s Obamacare expansion was very bad policy.

And it’s particularly galling that he made a religious argument for bigger government. I don’t think Libertarian Jesus would be amused.

Not Your Grandfather's FBI