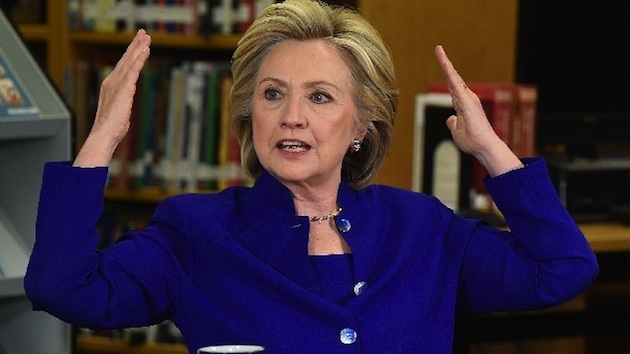 Former Secretary of State Hillary Clinton takes part in a roundtable of young Nevadans discussing immigration as she campaigns for the 2016 Democratic presidential nomination at Rancho High School in Las Vegas, May 5, 2015. (Photo: AP)

Charles Murray, already controversial for writing books on how welfare hurts the poor, on ethnic differences in IQ and on (less controversial, but my favorite) happiness and good government, has written a new book that argues that it’s time for civil disobedience. Government has become so oppressive, constantly restricting us with new regulations, that our only hope is for some of us to refuse to cooperate.

Murray’s suggestion — laid out in By the People: Rebuilding Liberty Without Permission, will make some people nervous. He argues that citizens and companies should start openly defying all but the most useful regulations, essentially ones that forbid assault, theft and fraud.

He writes, “America is no longer the land of the free. We are still free in the sense that Norwegians, Germans and Italians are free. But that’s not what Americans used to mean by freedom.”

He quotes Thomas Jefferson’s observation that a good government is one “which shall restrain men from injuring one another (and) shall leave them otherwise free to regulate their own pursuits.”
But our government today tries to do much more.

While we try to invent new things, government constantly seeks new ways to control us. The number of federal crimes on the books is now 50 percent larger than back in 1980 — a time when many people mistakenly thought the U.S. would cut the size of government.

Murray says, correctly, that no ordinary human being — not even a team of lawyers — can ever be sure how to obey the 810 pages of the Sarbanes-Oxley Act, 1,024 pages of the Affordable Care Act or 2,300 pages of Dodd-Frank.

What if we all stopped trying? The government can’t put everyone in jail. Maybe by disobeying enough stupid laws, we can persuade judges that only rules that prevent clear, real harm to individuals should be enforced: “no harm, no foul.”

Law is not always the best indication of what is good behavior. Riots in places such as Ferguson and Baltimore remind us that even cops sometimes behave badly.

No one wants to see law break down so completely that people get hurt, but historian Thaddeus Russell reminds us that many freedoms we take for granted exist not because the government graciously granted liberties to us but because of lawbreakers.

Bootleggers, “robber barons” who did things like transporting ferry passengers in defiance of state-granted monopolies and tea-dumping American revolutionaries ignored laws they opposed.

More recently, Uber decided it would ignore some cab regulations. It’s good that they did because Uber usually offers better and safer service. Today, Uber is probably too popular for government to stamp out.

Edward Snowden knew the legal consequences he’d face for revealing NSA spying on American citizens but did it anyway. I’m not yet sure if he did the right thing, but conservatives and leftists alike should admit that sometimes laws ought to be bent or broken.

Instead, each political party defends civil disobedience unless the people doing it are people that faction doesn’t like. The right loves ranchers who resist federal land managers but doesn’t like people who flout immigrations laws. The left likes pot smokers but whines about corporations ignoring ridiculously complicated environmental regulations.

Maybe most of these laws should be ignored by most of us (maybe we should disobey?).

Politicians themselves don’t always play by the rules. My last column was about how the Clintons get away with breaking rules. But I made a mistake that I must correct: I said the Clinton Foundation donated only 9 percent of its money to charity. Sorry, that was wrong. The Clintons and their flunkies were worse than that.

When Bill and Hillary say they want to “help people,” they’re talking about themselves. I don’t want to be forced to obey such people.

The Venal Corruption Of The Political Class