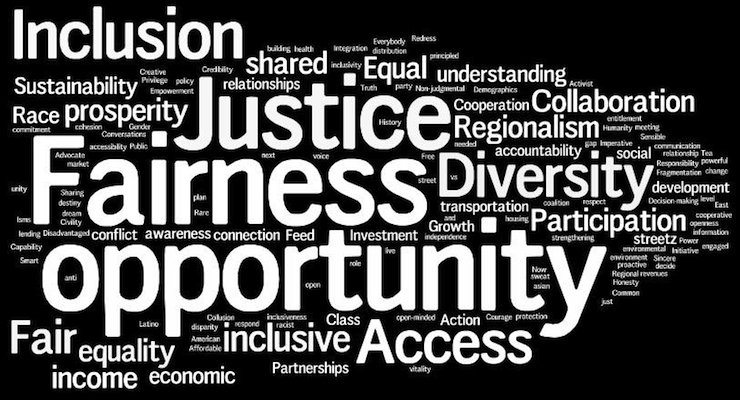 Since almost everybody wants a society that is just, that presumably means we all favor social justice. But in the American political system, the phrase has been adopted by those who favor bigger government and more intervention. Sort of the way “solidarity” and “social” are code words for statism in Europe.

Leftists think that this phrase gives them the moral high ground, but shouldn’t we judge “social justice” by outcomes rather than intentions?

Is statism really compassionate if it actually winds up lining the pockets of wealthy insiders?

Is statism really compassionate when it gives people an excuse to be stingy, as we see in Europe?

The answers to those questions probably depend on one’s definition of a just society.

For those fixated on equality, it appears that they are willing to accept more deprivation and hardship if everyone is equally poor.Which is the sentiment expressed in this clever image.

You won’t (or at least shouldn’t) be surprised that John Stossel is in the latter category. Writing for Reason, he debunks the notion that “social justice” is either social or justice. Instead, he explains that it’s just a new term for a defective product.

He points out that Venezuela supposedly is a role model for social justice, yet ordinary people are impoverished.

Oliver Stone, Sean Penn and Harry Belafonte praised Venezuela’s Hugo Chavez for his socialist revolution. Chavez then proceeded to destroy much of his country. …Only socialism could take an oil-rich nation and turn it into one where people wait in line for hours for survival rations.

Without the free market setting prices and allocating resources, all the cries of “justice” in the world don’t help anyone. You can’t eat justice. You can’t use it as toilet paper. …Socialists say capitalists just want to make a quick buck, but it’s government that can’t plan for the long haul. …Calling it “social justice” doesn’t make it work. …Markets, in which individuals, not just rulers, have property rights, give people options. Businesses have an incentive to serve as many people as possible, regardless of gender or ethnic group. They also have an incentive to be nice—customers are more likely to trade with people who treat them fairly. Everyone gets to choose his own path. That’s what I call justice.

Of course, I’m not holding my breath waiting for statists to agree with me or John Stossel.

That’s because, as Jonah Goldberg explains in this Prager University video, “social justice” is a catch-all term for the left’s agenda. And that agenda means more power for government and less freedom for individuals.

I particularly like how Jonah explains how statists are the ones that want to impose their values on others.

P.S. If you enjoyed this video, you’ll also like other Prager University videos, including ones on profits, the Laffer Curve, and the Great Depression.

P.P.S. I wrote last month to mock Senator Bernie Sanders for being a hopeless statist, but I also said he was a “faux socialist.”

George Will has the same jaded assessment.

Is it obligatory to take seriously his pose of being…a “socialist”? It gives excitable Democratic activists a frisson of naughtiness to pretend… In olden days, socialism meant something robust — government ownership of the means of production, distribution and exchange. Then, voters and reality being resistant to such socialism, the idea was diluted to mean just government ownership of an economy’s “commanding heights,” principally heavy industries, coal mines, railroads, etc.

But you’d have a hard time finding people who still believe that nonsense, even in the diluted form. In Europe, for instance, Social Democrats have morphed into conventional statists.

Today, “socialism,” at least in Western Europe where the term is still part of the political lexicon, is the thin gruel of “social democracy.” This means three things — heavy government regulation of commercial activities, government provision of a “social safety net” and redistribution of wealth through progressive taxation and entitlement programs. …Sanders, who thinks European social democracies are exemplary, evidently thinks America should be more like Greece.

And Thomas Sowell has the best (and most hard-hitting) way of describing the ideology of modern-day statists.

Neither Freedom nor Safety