HomeOpinionWhy it Matters that the United States Is (Supposed to Be) a Republic, not a Democracy 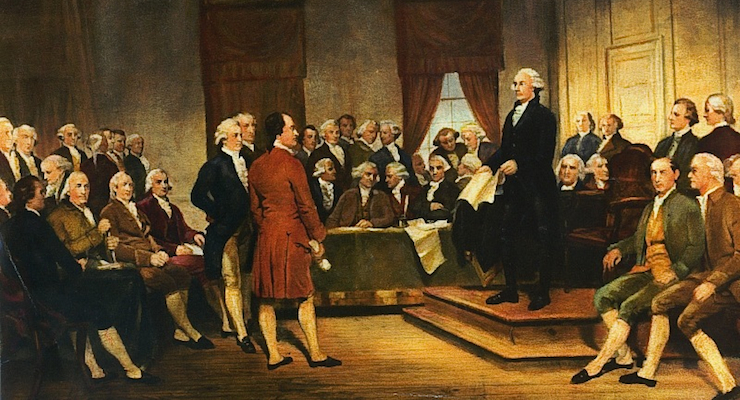 If you want to go to a Presbyterian church instead of a Baptist church, should the government be able to interfere with that choice? Even if, for some bizarre reason, 95 percent of the population doesn’t like Presbyterians?

If you want to march up and down the sidewalk in front of City Hall with a sign that says the Mayor is an idiot, should the government be able to throw you in jail? Even if 95 percent of the population somehow has decided the Mayor is a genius?

Most Americans instinctively understand that the answer to all these question is no. Not just no, a big emphatic NO!

That’s because certain rights are guaranteed by our Constitution, regardless of whether an overwhelming majority of our fellow citizens feel otherwise. 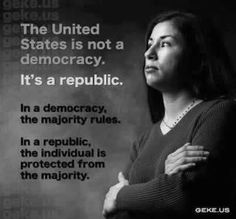 And that’s what makes us a republic rather than a democracy.

But the bad news is that many of our rights in the Constitution no longer are protected.

For instance, Article I, Section 8, specifically enumerates (what are supposed to be) the very limited powers of Congress.

Our Founding Fathers thought it was okay for Congress to have the power to create courts, to coin money, to fund an army, and to have the authority to do a few other things.

But here are some things that are not on that list of enumerated powers (and certainly not included in the list of presidential powers either):

And the list could go on for several pages. The point is that the entire modern Washington-based welfare state, with all its redistribution and so-called social insurance, is inconsistent with the limited-government republic created by America’s Founders.

These programs exist today because the Supreme Court put ideology above the Constitution during the New Deal and, at least in the economic sphere, turned the nation from a constitutional republic into a democracy based on unconstrained majoritarianism.

Here’s some of Walter Williams wrote on the topic.

Like the founders of our nation, I find democracy and majority rule a contemptible form of government. …James Madison, in Federalist Paper No. 10, said that in a pure democracy, “there is nothing to check the inducement to sacrifice the weaker party or the obnoxious individual.” …John Adams said, “Remember, democracy never lasts long. It soon wastes, exhausts, and murders itself. There was never a democracy yet that did not commit suicide.” …The word “democracy” appears nowhere in the two most fundamental documents of our nation — the Declaration of Independence and the U.S. Constitution.

…the Constitution’s First Amendment doesn’t say Congress shall grant us freedom of speech, the press and religion. It says, “Congress shall make no law respecting an establishment of religion, or prohibiting the free exercise thereof; or abridging the freedom of speech, or of the press…” …In a democracy, the majority rules either directly or through its elected representatives. …Laws do not represent reason. They represent force. The restraint is upon the individual instead of government. Unlike that envisioned under a republican form of government, rights are seen as privileges and permissions that are granted by government and can be rescinded by government. …ask yourself how many decisions in your life would you like to be made democratically. How about what car you drive, where you live, whom you marry, whether you have turkey or ham for Thanksgiving dinner?

And click here for a video that explains in greater detail why majoritarianism is a bad idea.

We’ll start with this depiction of modern elections, which was featured on a friend’s Facebook page. 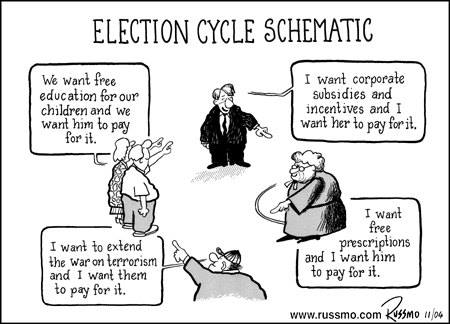 And here’s one that I’ve shared before.

It highlights the dangers of majoritarianism, particularly if you happen to be a minority. 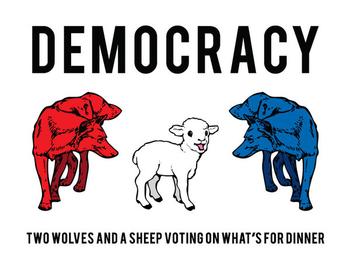 P.S. George Will has explained that the Supreme Court’s job is to protect Americans from democracy.

P.P.S. Here’s more analysis of the issue from Walter Williams.

P.P.P.S. Some leftists are totally oblivious about America’s system of government.

P.P.P.P.P.S. Looking at the mess in the Middle East, I’ve argued we would be in much better shape if we promoted liberty instead of democracy.

For Leftists, It's Open Season on Christians