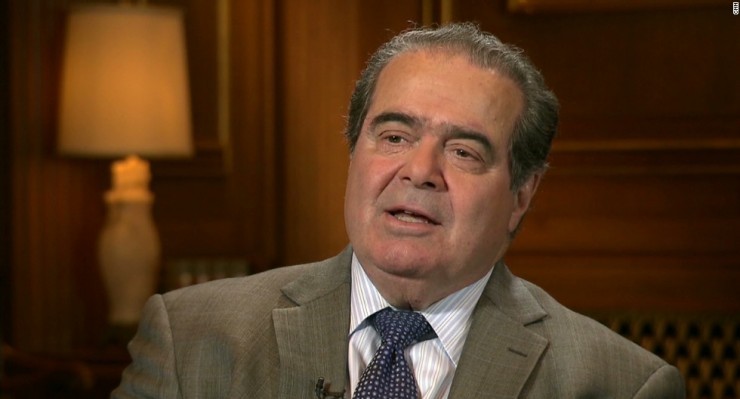 If you doubt that Christians are fair game for ridicule by the cultural left, take a look at the hit piece on Supreme Court Justice Antonin Scalia by Jeffrey Tayler for Salon.

I can’t decide which is worse, the title or the subtitle. The title: “Antonin Scalia is unfit to serve: A justice who rejects science and the law for religion is of unsound mind.” The subtitle: “The justice claims to be an originalist, but his real loyalty is to religion and a phony man in the sky.”

The writer is trying to be cute, but don’t conclude that any part of his thesis is intended to be tongue-in-cheek. He opens by telling us that “faith-derangement syndrome” has now infected the Supreme Court as it has the executive branch.

He writes: “Sufferers of faith-derangement syndrome (FDS) exhibit the following symptoms: unshakable belief in the veracity of manifest absurdities detailed in ancient texts regarding the origins of the cosmos and life on earth; a determination to disseminate said absurdities in educational institutions and via the media; a propensity to enjoin and even enforce (at times using violence) obedience to regulations stipulated in ancient texts, regardless of their suitability for contemporary circumstances; the conviction that an invisible, omnipresent, omniscient authority (commonly referred to as ‘God’) directs the course of human and natural events, is vulnerable to propitiation and blandishments, and monitors individual human behavior, including thought processes, with an especially prurient interest in sexual activity.”

Tayler is particularly exercised by his assumption that Scalia rejects Tayler’s sainted opinions on both “anthropogenic global warming” and “the fact of evolution — the foundation of modern biology — in favor of the opening chapter of a compendium of cockamamie fables concocted by obscure humans in a particularly dark age, evidence that his faculty of reason has suffered the debilitating impairment associated with acute FDS.” Tayler continues, “He therefore cannot be relied upon to adjudicate without prejudice and should be removed from the bench henceforth.”

Sorry for the extensive quotes, but I have to assume you’d think I were exaggerating if I paraphrased this harangue.

What apparently got Tayler’s attention was an interview of Scalia a few years ago by Jennifer Senior, a contributing editor for New York magazine. Tayler was disgusted that Scalia accepts the Catholic teaching about homosexuality and incredulous at his admission that he believes in heaven and hell and that the devil is “a real person.”

Senior asked Scalia, “Have you seen evidence of the devil lately?” I wish Scalia had cited the left’s glorification of abortion as Exhibit A, but he chose instead to point to the devil’s wiliness in getting people not to believe in him or God.

Scalia’s confessions of faith, by Tayler’s lights, constitute an “outrage against reason,” calling the devil “a comic-book bugaboo the pedophile pulpiteers of (Christianity) have developed to warp the minds of their credulous ‘flocks’ for two millennia.” He condemns Scalia as a self-confessed “biblical literalist,” which means Scalia is “an enemy of historical fact.”

I wrote a book last year presenting evidence and arguments supporting Christianity’s truth claims, so I won’t re-litigate that case here except to say that in my humble view, many who espouse Darwinian evolution as if it were gospel despite the gaping holes in the theory or man-made global warming as an unchallengeable fact that represents an existential threat to humankind often are arrogant, curiously incurious and close-minded and don’t know a fraction of what they think they know.

Further, the aggressive anti-theists who mock Christians for believing in the God of the Bible and his Word believe at least one thing that requires far more faith: that something arose from nothing without a Creator. Oh, sure, some of them tell you they don’t believe that, saying that they believe in multiverses, that we are the spawn of aliens or that the universe has always existed, even though science, which they tend to deify when it is convenient, points to a definite beginning to the universe. Even if it didn’t and even if there were no such thing as entropy, it would still take a formidable suspension of disbelief to believe in an eternal universe.

I am not nearly so troubled by Tayler’s beliefs or non-beliefs as I am by his derisive, contemptuous and tyrannical attitude toward believers. You should know that he acknowledges that 6 in 10 Americans believe in the devil yet still implies the belief is insane. Christians, in his view, are “devotees of an invisible celestial tyrant.”

What I suspect animates Tayler’s angst regarding Scalia (and other Christians) is Scalia’s faith-based view against same-sex marriage. Why else would Tayler single out a justice of the Supreme Court poised to rule on a case involving this issue? Why else would he sneer at God’s “especially prurient interest in sexual activity,” which, by the way, is a perverse mischaracterization of the God of the Bible? Why else would he allude to “the many Religious Freedom Restoration Acts disgracing legal codes of far too many states”?

In the end, however, Tayler’s motives are beside the point, which is that he feels not only free to unleash this kind of slander against the belief system of the majority of Americans but also that there is no risk that he will be considered, much less called, a bigot or intolerant for doing so. That’s because in the leftist-dominated media culture, you can, with limitless vile, insult individuals and groups outside those protected by political correctness with impunity and often with confidence that you’ll be praised.