Marilyn Mosby Guilty of What She Seeks to Condemn 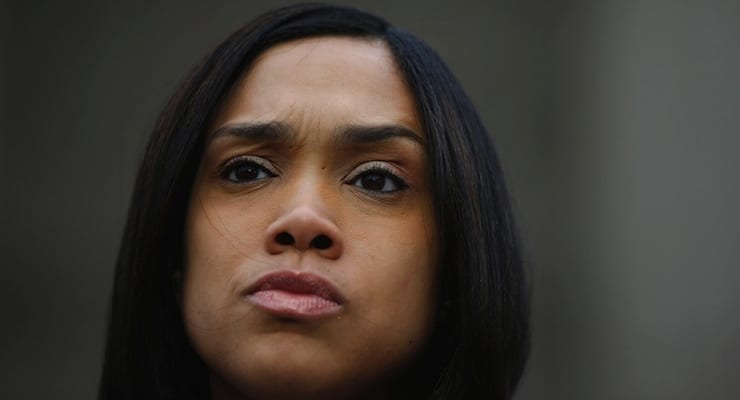 I ask you quite sincerely, What is the moral difference between racially motivated abuses of power by rogue municipal police officers and those by prosecuting attorneys?

People should be concerned by Baltimore City State’s Attorney Marilyn Mosby’s behavior, but it is especially alarming when you consider that she is engaging in the same type of behavior that she is using her state power to criminalize.

We can now see why Mosby played hide the ball with the autopsy report on Freddie Gray’s death, and it certainly wasn’t to protect anyone’s privacy — except, perhaps, her own, because it is objectively damning to her politically driven prosecution.

I have always been a law-and-order type of person and a strong supporter of law enforcement officials. In my book, cops don’t receive nearly the credit and respect they deserve for helping to keep the peace, protect the citizenry and preserve ordered liberty. Over the years, I have observed how the political left has frequently abused, undermined and denigrated law enforcement, presumably because to many leftists, cops symbolize the Man — the existing power structure that represents the form of government they resent. It’s ironic that these same leftists still target law enforcement when they are now largely in control of government and have managed to fundamentally change so much about our government that it ought to be to their liking.

Despite my respect for law enforcement, I must also point out that I am equally passionate against those situations in which cops — or any other governmental officials — go rogue and abuse their authority. It is horrifying when people vested with official authority abuse their authority under color of law. And when cops cross that line, they must be brought to justice, without question.

But it’s wrong to evaluate allegations of abuse through biased lenses. You don’t assume cops are acting improperly just because you are prejudiced against cops or authority. You must assess each individual case on its own merits.

It was obvious at the time Mosby threw the book at these six officers that she had rushed to judgment and that she was primarily motivated not by justice but by political and emotional considerations, including a desire to punish cops for what she apparently believes are institutional wrongs. Why else would she attend anti-cop events? Why else would she appeal to the protesters and promise them justice?

As a state’s attorney, Mosby doesn’t have the luxury of viewing these incidents through a racial prism because of her own feelings or her desire to satiate a lynch mob. She has a fiduciary duty to weigh the evidence impartially. For her to use her power to overcharge these law enforcement officials was to extend the mob violence and mayhem of the protesters from the streets into the halls of justice, and it is despicable.

The just-leaked autopsy report reveals just how improper Mosby’s charging decisions were. She already had to dismiss her absurd false imprisonment counts when the defense exposed that the knife Gray was carrying was not legal under Baltimore’s city code as Mosby initially claimed and thus he was not arrested under false pretenses.

The report shows that Gray tested positive for “opiates and cannabinoid.” Gray was out of control, verbally and physically active, yelling, banging and disorderly enough to cause the van to rock from the inside. His ultimately fatal injury is believed to have been caused by his crashing into the inside wall of the van when the vehicle rapidly reduced its speed at some point. This apparently led to paralysis in his arms and impeded his ability to breathe.

But here’s the kicker. Had Gray remained in the prone position that officers had placed him in, he probably wouldn’t have sustained the type of injury he did. Gray’s standing up on his own, according to George Washington University law professor John Banzhaf, presented “a new and unexpected danger” that the police “could not have reasonably anticipated.”

Banzhaf said it will be “very, very hard” for the state to prove the police officers had the state of mind required to prove the criminal charges against them. Let’s just look at the most serious charge filed — that of depraved-heart murder in the second degree against Officer Caesar R. Goodson Jr., the driver of the van. Having a depraved heart means having a wanton indifference to the potential harm that could be caused, to the extent that the accused might as well have intended to kill the victim.

Who can look at the facts of the case that have come out so far and not conclude that this particular charge is over-the-top and unwarranted?

All the evidence will eventually come out, but from what we already know, Mosby’s decision to file such serious charges, especially this one against Goodson, ought to give us all pause. With the stroke of a pen, she has gone a long way toward ruining this individual’s life — even if he is eventually acquitted — not so that justice can be served but so the mob can be satisfied.

How is that any different from the alleged abuses she appears to be abusing her own power to pursue?