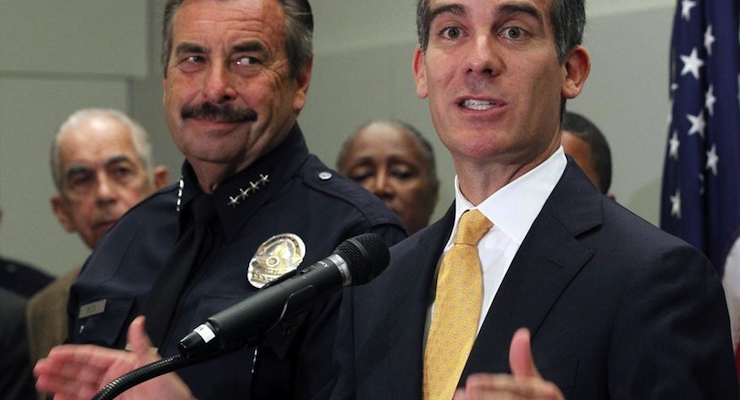 Los Angeles Mayor Eric Garcetti, right, speaks as Police Chief Charlie Beck listens at left at a news conference to discuss mid year crime statistics in Los Angeles Wednesday, July 8, 2015. Crime has increased 13 percent in Los Angeles in the first six months of the year, ending more than a decade of declines in the nation’s second-largest city, according to statistics released by the Los Angeles Police Department on Wednesday. Garcetti said “this is bad news” but that Los Angeles remains one of the safest large cities in the U.S. Beck partially attributed the crime spike to increases in homelessness, gang crime and domestic violence.(AP Photo/Nick Ut)

I was forced to watch CNN Monday morning while sitting in a professional’s waiting room. The subject of discussion was the explosion in murders in New York, Los Angeles and other cities in the last year. I laughed as the pundits agreed that throwing more money at the problem was the answer, while discussing how these inner-city police departments are “under-resourced.” The problem may be resources to some extent. However, the real problem is belief in liberal policies, which essentially remove accountability from one’s actions.

It’s no secret that New York Mayor Bill de Blasio has significantly reversed former Mayor Rudy Giuliani’s policies of community policing. It is no secret that the Left has been on an anti-racist jihad against police in general. Do Democrats really believe that this agenda will lead to less crime and to a safer society? I think not. This is because at its core, Marxism is simply extreme irresponsibility.

What we are seeing today in our society with its anti-police, politically correct focus is a type of cultural Marxism. The root of this belief is that you can do anything you want, no matter the consequences, because society should not hold you accountable personally. If someone tells you otherwise or points out your foolishness, call them a racist and shame them in public. That is the Left’s agenda, freedom from accountability and milking the public coffers, not public safety.

This cultural Marxism is bred in our universities as the liberal, tenured faculty re-educate our youth to believe all this crap. Today’s graduates can’t compete in the job market, but they can sure carry a mattress around all day complaining of victimhood that never happened. The result of these decades of Marxist teaching has led to a generation of young adults who will believe anything they are told. This belief holds regardless of in-your-face evidence to the contrary.

For instance, you can borrow and spend all you want; there will be no consequence to mountains of long-term, sovereign debt. Our youth really believe the party will never end. They just won’t even open the minds to an alternate reality, even though they will be the ones most likely to suffer the consequences. Our Leftist leaders know that this financial strategy won’t work but they simply don’t care. They want to get as much as they can from others before the lights go out. Of course, events in Greece, the Eurozone, Puerto Rico and elsewhere are non-issues to them. Did they watch as University of Texas visiting professor Yanis Varoufakis just destroyed the Greek economy, putting these theories into practice? No, of course not.

The American way of life, which historically has included the rule of law, capitalism, individual responsibility and peace through strength, is eroding. There will be significant consequences to this “change.” The rise of totalitarian regimes who use a kind of managed capitalism can exist and prosper for a while. That is, until reality smacks them in the face. Look at what is going on in China. The Chinese have been actively attempting to usurp the U.S. dollar as the world’s reserve currency. They have been actively petitioning the IMF to include the yuan in the IMF’s Special Drawing Rights, a kind of basket of reserve currencies in the world. The problem is that little thing called free markets. With a massive bubble in equities generated by the Chinese to keep their populations constituents in the money and therefore buy social cohesion, reality has happened and the bubble has popped. It was unsustainable as all bubbles are. What do the Chinese do? Arrest the sellers, of course! That will stop a stock market crash!

These kind of managed circuses cannot go on forever, as in the end, someone is left holding the bag. Unfortunately, this is exactly the type of government management of the economy the Obama administration is attempting to install here. It won’t work. It never has worked in the history of the world. Europe, which the Left holds up as the socialist model, is crashing. They have finally run out of other people’s money. Just watch the evening news. But that doesn’t matter because our youth won’t pay attention to that. They just keep going to Bernie Sanders rallies.

Finally, our leftist ostriches have their heads in the collective sand regarding national security. Give Iran, the world’s greatest sponsor of terrorism, the bomb! Of course there will be no consequences! Obama told me so! Tell Vlad I will be more flexible after the election why don’t you! There will be consequences to this denial of reality as well, only it will be much more severe and existential.

I’m reminded of the scene in Will Smith’s “Independence Day,” when the loonies are on the top of the skyscraper, smoking dope and having a party, welcoming the alien spaceship, as the weapon is lowered which will, in a few seconds, vaporize them.