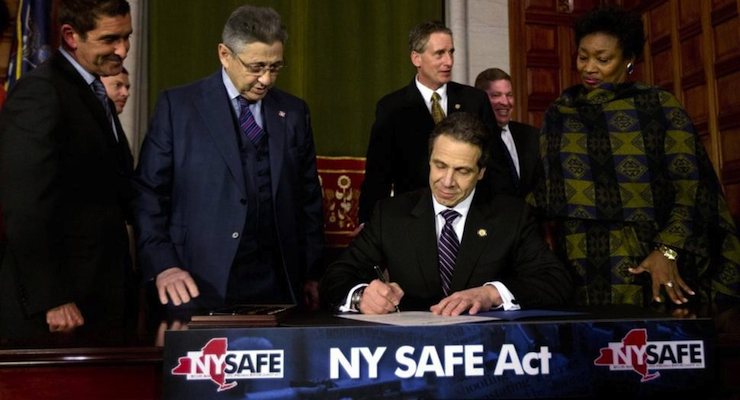 Gov. Andrew M. Cuomo signing the SAFE Act, which further hindered gun rights in New York, including a restriction on the number of rounds allowed in a magazine was not. (Photo: Nathaniel Brooks for The New York Times)

My town, New York City, enforces rigid gun laws. Police refused to assign me a gun permit. The law doesn’t even let me hold a fake gun on TV to demonstrate something.

But New York politicians are so eager to vilify gun ownership that they granted an exception to the anti-gun group States United to Prevent Gun Violence. New York allowed States United to set up a fake gun store, where cameras filmed potential gun customers being spoofed by an actor pretending to be a gun-seller.

“This a nine-millimeter semi-automatic. It’s a very handy gun. It’s easy to use,” he says. “You can carry it in a purse like that gal from Wal-Mart. Her two-year-old son reaches into her pocketbook, pulls it out, shoots her. Dead, gone, no Mom!”

States United then made that footage into an anti-gun public service announcement. “Over 60 percent of Americans think owning a gun will make them safer. In fact, owning a gun increases the risk of homicide, suicide and unintentional death,” says the video.

It’s a powerful message. But it’s a lie, says John Lott of the Crime Prevention Research Center. He says that gun control advocates lie all the time.

Lott acknowledges the tragedies. Sometimes a gun in the home is used in a homicide or suicide, or leads to accidental death, but he adds, “It also makes it easier for people to defend themselves — women and the elderly in particular.”

Lott says, “Every place in the world that’s tried to ban guns … has seen big increases in murder rates. You’d think at least one time, some place, when they banned guns, murder rates would go down. But that hasn’t been the case.”

I pushed back: what about people harming themselves?

“There are lots of different ways for people to commit suicide,” Lott said, and researchers have looked at how those tragedies are affected by access to guns. “We find that people commit suicide in other ways if they don’t have guns.”

What about accidents? Lott replies that accidental shooting deaths are relatively rare: “about 500 a year.” That sounds bad, but about 400 Americans are killed by overdosing on acetaminophen each year (most of them suicides), and almost as many Americans drown in swimming pools.

“It would be nice if it was zero (but) consider that 120 million Americans own guns,” Lott says.

Often those guns are used to prevent crime. The homeowner pulls out the gun and the attacker flees. No one knows how often this happens because these prevented crimes don’t become news and don’t get reported to the government, but an estimate from the Violence Policy Center suggests crimes may be prevented by guns tens of thousands of times per year.

Add politics to the mix and the anti-gun statistics get even more misleading. Gang members in their late teens or early adulthood killing each other get called “children.” Fights between gangs near schools get called school “mass shootings.”

The number of mass shootings in America has been roughly level over the past 40 years, but the New York Times still runs headlines like, “FBI Confirms a Sharp Rise in Mass Shootings Since 2000.” That headline is absolutely true, but only because they deceitfully picked the year 2000 as their start point, and that was a year with unusually few mass shootings. It’s as if the paper wants to make it seem as if mass shootings are always on the rise, even as crime keeps going down.

It all helps stoke paranoia about guns. Some people respond by calling for more controls. Others, fearing the government may ban gun sales, respond by buying more weapons. The number of people holding permits to carry concealed weapons has skyrocketed to 12.8 million, up from 4.6 million just before President Obama took office. Since 40 percent of American households now own guns, anyone who wants to take them away will have a fight on his hands.