HomeOpinionRecycling: The Triumph of Feel-Goodism over Common Sense

Recycling: The Triumph of Feel-Goodism over Common Sense 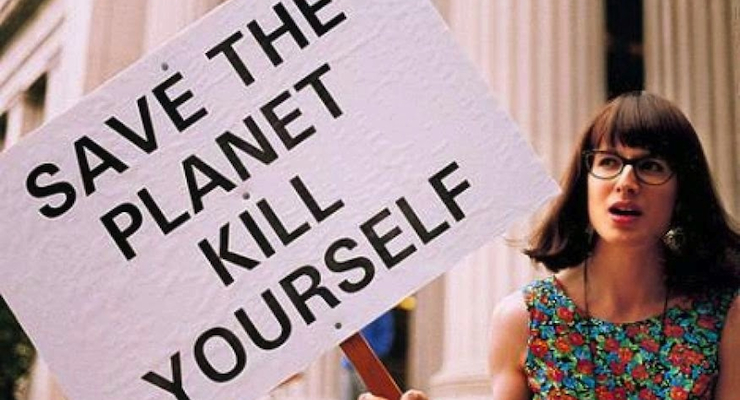 A radical environmentalist protests outside of the U.S. Supreme Court during oral arguments in a case that resulted in a landmark rejection of EPA carbon emission rules.

Since it’s basically a way of protecting property rights, environmental protection is a legitimate function of government. That’s the easy part. It gets a lot harder when calculating costs and benefits.

Everyone surely agrees that a chemical company shouldn’t be able to dump toxic waste in a town’s reservoir because the costs would out-weigh the benefits. And presumably everyone also would concur that banning private automobiles would be crazy because this would be another example of costs being greater than benefits.

But there’s a lot of stuff in between those extreme examples where agreement is elusive. And I’ll admit my bias. I don’t trust the modern environmental movement, particularly the climate alarmists. There are just too many cases where green advocates act like their real goal is statism.

Moreover, the hypocrisy of some environmental dilettantes is downright staggering. And they also seem to be waging a regulatory war on modern life. I’m giving all this background to create context for an article I want to discuss. John Tierney, a columnist for The New York Times. has a piece that debunks recycling. He starts by looking back 20 years.

As you sort everything into the right bins, you probably assume that recycling is helping your community and protecting the environment. But is it? Are you in fact wasting your time? In 1996, …I presented plenty of evidence that recycling was costly and ineffectual, but its defenders said that…the modern recycling movement had really just begun just a few years earlier, they predicted it would flourish as the industry matured and the public learned how to recycle properly.

So what’s happened over the years? Has recycling become more feasible and rational? Not exactly. From a cost-benefit perspective, it’s a scam. It simply doesn’t make sense.

…when it comes to the bottom line, both economically and environmentally, not much has changed at all. Despite decades of exhortations and mandates, it’s still typically more expensive for municipalities to recycle household waste than to send it to a landfill. …the national rate of recycling has stagnated in recent years. …The future for recycling looks even worse. As cities move beyond recycling paper and metals, and into glass, food scraps and assorted plastics, the costs rise sharply while the environmental benefits decline and sometimes vanish. …“Trying to turn garbage into gold costs a lot more than expected…”

…well-informed and educated people have no idea of the relative costs and benefits. …Here’s some perspective: To offset the greenhouse impact of one passenger’s round-trip flight between New York and London, you’d have to recycle roughly 40,000 plastic bottles, assuming you fly coach. …if you wash plastic in water that was heated by coal-derived electricity, then the net effect of your recycling could be more carbon in the atmosphere.

A traditional argument for mandated recycling is that landfill space is vanishing. But that’s always been bunk.

One of the original goals of the recycling movement was to avert a supposed crisis because there was no room left in the nation’s landfills. But that media-inspired fear was never realistic in a country with so much open space. In reporting the 1996 article I found that all the trash generated by Americans for the next 1,000 years would fit on one-tenth of 1 percent of the land available for grazing. And that tiny amount of land wouldn’t be lost forever, because landfills are typically covered with grass and converted to parkland… Though most cities shun landfills, they have been welcomed in rural communities that reap large economic benefits (and have plenty of greenery to buffer residents from the sights and smells).

Moreover, incinerators are another practical option.

Modern incinerators, while politically unpopular in the United States, release so few pollutants that they’ve been widely accepted in the eco-conscious countries of Northern Europe and Japan for generating clean energy.

The bottom line is that recycling is an expensive feel-good gesture by guilt-ridden rich people.

In New York City, the net cost of recycling a ton of trash is now $300 more than it would cost to bury the trash instead. That adds up to millions of extra dollars per year — about half the budget of the parks department — that New Yorkers are spending for the privilege of recycling. That money could buy far more valuable benefits, including more significant reductions in greenhouse emissions. …why do so many public officials keep vowing to do more of it? Special-interest politics is one reason — pressure from green groups — but it’s also because recycling intuitively appeals to many voters: It makes people feel virtuous, especially affluent people who feel guilty about their enormous environmental footprint.

I don’t have a strong opinion on whether rich people should feel guilty about their resource consumption. But I definitely get agitated when they try to atone for their guilt by foisting costly and ineffective policies on other people.

P.S. That’s why I consider myself to be pro-environment while also being a skeptic of environmentalists. Simply stated, too many of these people are nuts.

P.P.S. Some environmental policies lead to disgusting examples of government thuggery (some of which, fortunately, are not successful).