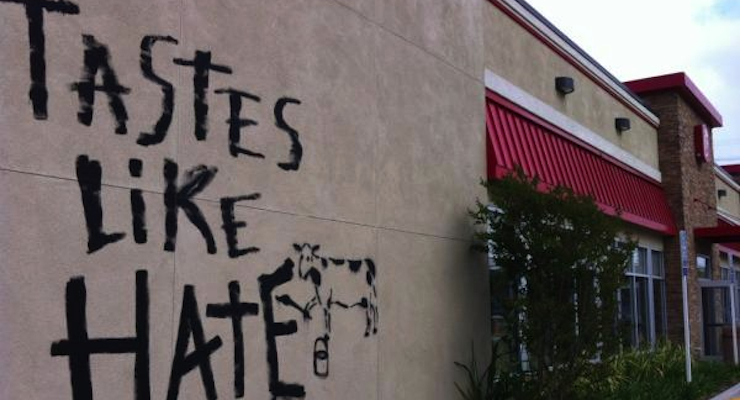 A vandalized Chick-fil-A in response to the owners position on gay marriage.

Support for the idea that it’s good to hear all opinions, even offensive ones, is thin. A plurality of Americans now support laws against “hate speech.”

Conservatives once wanted to ban Playboy magazine, violent rap lyrics and offensive depictions of Jesus. Leftists then were right to fight such bans, but today leftists encourage censorship in the name of “tolerance.”

Scientist Matt Taylor helped land a probe on a comet for the first time in history. But because he explained his achievement while wearing a T-shirt that had cartoons of sexy women on it (designed by a female friend of his), writer Rose Eveleth of The Atlantic tweeted that Taylor “ruined” the comet landing. The public outcry against him was so great that he cried at an apologetic press conference.

Silicon Valley entrepreneur Brendan Eich created JavaScript and helped start Mozilla Firefox. But when activists discovered that he’d once donated $1,000 to support California’s Proposition 8 banning gay marriage, they attacked him as “a hater.” A year and a half later, Eich still can’t find a job.

When Eich donated the money, Barack Obama and Hillary Clinton opposed gay marriage, too. But in just five years, such opinions have become so “unacceptable” that a tech genius is ostracized by his own industry.

As long as the leftist mobs don’t use law or violence, they’re still engaged in free speech. Private employers can impose most any speech rule they choose. The First Amendment applies (SET ITAL) only (END ITAL) to government. But now some government officials are as eager to censor as the leftist mobs.

Since mayors may influence permits and zoning, their threats aren’t idle. And no new Chick-fil-A outlets have opened in those cities. This is a clear violation of the First Amendment, although the politicians seem oblivious to that.

Of course, much worse than today’s left are those who censor through violence. Al Qaeda’s magazine names people who should be killed, chirping, “A bullet a day keeps the infidel away.”

Writers and artists heed the threats. CNN, NBC and the New York Times will no longer show Mohammed cartoons.

I was surprised that liberal commentators were so eager to cave in to the terrorists’ threats. Chris Matthews said, “Wanting to pick a fight with Islam is insane.”
Such cowardice just invites more censorship.

When the TV series “South Park” was censored by its own network for depicting Mohammed, a fan of the show, liberal cartoonist Molly Norris, showed her support by drawing her own cartoons of Mohammed. For doing so, she received death threats. Fearing for her safety, she went into hiding.

Columnist Mark Steyn was appalled that “Her liberal newspaper — the way they put it in announcing that she’d gone, (SET ITAL) ceased to exist (END ITAL), was: ‘There is no more Molly.'” She hasn’t been heard from in five years.

“The only way we’re going to move to a real sense of freedom is if every time somebody puts a bullet in a cartoonist for drawing a cartoon of Mohammed,” says Steyn, “every newspaper … displays that picture.”

“You can have a society with free speech where I call you names, and you do rude drawings of me, and I say you’re a hater, and we hatey-hatey-hate each other,” said Steyn on my TV special, “Censorship in America,” but “the alternative is the Muslim world where there’s no open debate, and so there’s nothing left to do but kill and bomb and shoot.”

Free speech matters. If we give in to those who would shut us up, the censors will push and push until we have no freedom left. If we’re going to sort out which ideas are good and which are bad, everyone must be allowed to speak.