Carly Fiorina, Why Are You Still On That Stage? 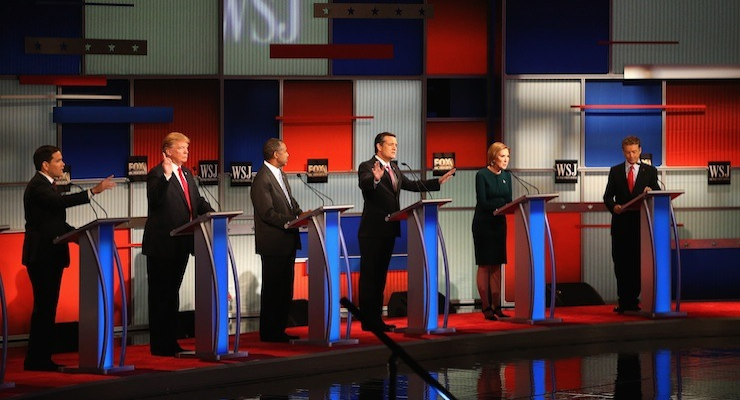 Carly Fiorina’s performance during the fourth Republican debate hosted by FOX Business Tuesday night in Wisconsin was very disappointing, and a far cry from her previous showings. In the first debate, when she was still relegated to the undercard line up, she came across as entertaining, strong, and offered clear and distinct answers to each question that came her way.

But those moments, and that Carly, are long gone since the second debate when she tackled Planned Parenthood–albeit by playing loose with the facts–and demonstrated a firm grip on the issues. Now, in each of the previous two debates, the former Hewlitt-Packard CEO has demonstrated a tendency to use–dare I say–several Hillary-esque tactics. More on that in a moment.

Fiorina seems to also have two less-than disagreeable habits, one of which she apparently shares with Ohio Gov. John Kasich.

During the fourth debate Tuesday night, Fiorina repeatedly interrupted several candidates in exchanges that came across as rude rather than an admirable attempt to muscle her way into the discussion. This is something New Jersey Gov. Chris Christie pointed out during the debate hosted by CNN. But, unlike the CNN debate moderators, the team at FOX Business did a more than decent job at allotting candidates time fairly and appropriately.

Her blatant disregard for the buzzer and other candidates made me want to throw something at the television, not cheer her on.

Let’s face it. The only reason why Carly Fiorina is still on that stage is because the Republican National Committee is nervous about nixing the only woman candidate, being called sexist by Hillary Clinton and misogynists by leftwing feminists. Currently, according to the PPD average, Fiorina is tied with Sen. Rand Paul at 3.2%, and is not in a statistically significant better position than Kasich or Gov. Mike Huckabee, the latter of which was relegated to the undercard debate.

Because she has been unable to capitalize on her previous debate performances, her polling numbers have fallen precipitously and, because she needs these debates to stay competitive in the race, she is obnoxiously interrupting everyone else on stage. It’s getting old. Actually, it’s already old.

Candidates, whether male or female, should acknowledge a general rule of thumb regarding Republican primary voters. They are looking for the best candidates and, whether they are male or female, matters not. Fiorina’s incessant use of the gender card, which as PPD has documented goes back to her 2010 Senate race against Tea Party favorite Chuck DeVore, will not only get her nowhere in the primary but also risks damaging the party brand in the general election.

Fiorina should take a page from the late great Margaret Thatcher, Great Britain’s longest-serving prime minister. Now there is a woman who dominated in a predominately male political world. Thatcher, rather than cutting off her fellow lawmakers in parliament, not only gave them their time but cut them down, making them look like foolish little children in need of an adult mother in the room. Thatcher was a woman that not only demonstrated strength, but embraced her obvious gender status in a way that enabled her to use it to reenforce that strength.

That’s how a true conservative woman conducts herself in a crowd–or on a stage–otherwise dominated by men. It’s becoming increasingly and painfully clear that Carly Fiorina no longer can justify her place on that stage.

The President and the Rule of Law