The Paris Attacks and What Must Change 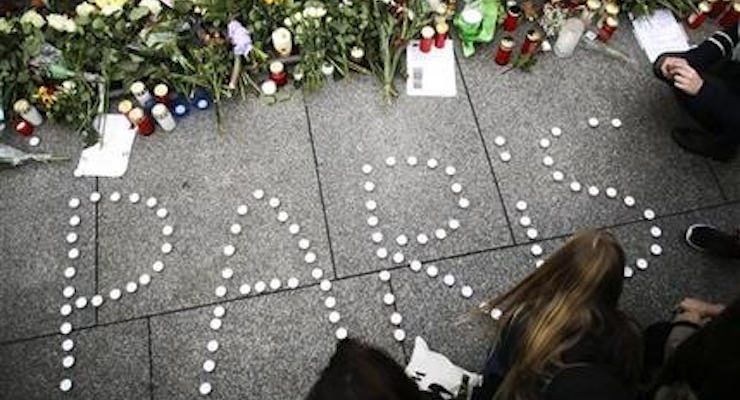 Young women have formed the word Paris with candles to mourn for the victims killed in Friday’s attacks in Paris, France, in front of the French Embassy in Berlin, Saturday, Nov. 14, 2015. (AP Photo/Markus Schreiber)

Many French people referred to the January attacks on the offices of French satirical weekly Charlie Hebdo and other sites as their 9/11. As awful as that time was, it was not a 9/11. Seventeen people died that day. The Sept. 11, 2001, assaults on New York and Washington left nearly 3,000 dead, having demolished two skyscraping towers, part of the Pentagon and, in the process, four large jetliners full of passengers.

What happened in Paris on Friday was still not on the scale of 9/11, though getting closer. And it was more terrifying than our 9/11 in one very important way.
The terrorists behind 9/11 focused on national landmarks. France’s 11/13 horror was a coordinated assault on a variety of “soft targets,” places ordinary Parisians and tourists patronized for fun and relaxation.

The choice of soft targets was the “game changer,” and not just for the French. American law enforcement has taken note. And so should ordinary Americans grown overly confident that they can stay safe without empowering the federal government to broadly monitor our communications to locate the bad people operating in a sea of good.

The widespread acceptance of encryption devices on cellphones is one such example.

This technology prevents law enforcement from listening in on the cellphone calls of terror suspects under surveillance, even if the police have warrants.

As New York Police Department Commissioner Bill Bratton said Sunday, “I think you’re going to see that playing a significant factor in this event.” He also said: “These apps, these devices that now allow these terrorists to operate without fear of penetration by intelligence services — this is the first example of this.”
We’re talking to you, Apple. We’re talking to you, Google.

Before the outrage in Paris, squads of heavily armed security personnel were already patrolling the big marquee sites. They were in front of the Notre Dame Cathedral, at the Eiffel Tower and around the Sacre Coeur basilica. The savages went after the sort of locales one doesn’t think to protect.

On Sunday, I thought of all those unremarkable-looking eating establishments I had passed on a recent visit to Paris — Asian restaurants like Le Petit Cambodge and the bar-cafes like Le Carillon. They’re everywhere. The music club Bataclan, site of the most vicious attack, could have been a music club back home.

Similar soft targets are found in every big, medium and small city in the Western world. You can’t place police in all of them. The only thing we can do is have intelligence capabilities able to identify terrorist plots still in the planning stage.

French President Francois Hollande wants to extend the current state of emergency to three months. That would be a very serious clamping down on movement. It would let the authorities set curfews, ban large gatherings and close public facilities, such as museums. And it would let security services search houses at any time.

American civil libertarians so incensed at the National Security Agency’s relatively innocuous program of examining the metadata (the time, length, etc., not the content) of our communications for disturbing patterns should be mindful that the liberty-loving French appear to be accepting their new restrictions as a tragic necessity. America has had the luxury of its recent good luck in avoiding gruesome terrorist attacks and the passing of time since the trauma of Sept. 11.

As the holiday season approaches, soft targets will be anywhere people shop, party or even worship. We can’t assume that security agencies operating blindly can locate the monsters who may target them. This is our reality, and we can’t wish it away.

Commander-In-Chiefs Who Refuse to Identify the Enemy